The true story of Damini and Champakali 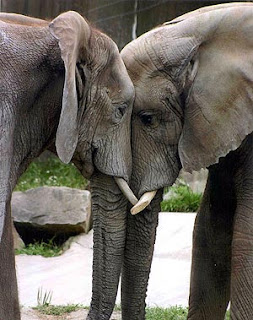 Damini was 55 when she was rescued from her "owners" in early 1998. She was sent to live at the Prince fo Wales Zoo in Lucknow, India, where she spent five months alone in the zoo before being joined by Champakali. Champakali, a working elephant had been granted maternity leave from her job carrying tourists and officials for the India Forest Department - the first elephant granted maternity leave for any forest department elephant.
When Champalaki arrived at the zoo in September 1998, the two elephants, Champa and Damini became inseparable in no time... to the relief of the Forestry Department and Zoo officials who were extremely worried about who would nurse Champa. But Damini took up the job instantly.
It is rare for working elephants to become pregnant according to officials, because there are no males among them. But a wild bull elephant had impregnated Champakali and because no one at the Forest Department witnessed the mating, the expected date of delivery was uncertain. In the wild, it is customary with a pregnant elephant in a herd where the real aunt or the other experienced relation acts as midwife. If an elephant chooses to deliver while standing - which is what the prefer - then the calf falls to the ground from a height and may get hurt or even die from the fall. So the midwife makes a cushion of sorts with her trunk to work as a shock-absorber. The midwife also breaks the amniotic membrane from the new newborn if it fails to break. But even before delivery, the aunt remains with the pregnant one to help her cope with pains. She also helps the mother in post-natal care of the calf.
This is what Damini assumed. She undertook the role of aunt, nurse and midwife for Champakali.
When Champalaki started to show advanced stage of pregnancy, Damini turned protective and caring toward Champa. Whenever Champa suffered labor pain, Damini rushed to her and caressed her. Damini ate only after Champa was fed and always trailer her when Champa took a stroll within the enclosure. She made herself available at all hours and Champakali lapped up the attention.
The first elephant to be granted maternity leave was pampered, mothered and loved since the day she arrived at the zoo. They had already christened the 'daugther-to-be' "Puhlkali" and she was eagerly awaited by the staff at the zoo and the Department of Forestry.
But, Champakali died while giving birth to a stillborn calf on April 11, 1999.
Unable to bear her death, Dr. Shukla, the zoo veterinarian who had been documenting every moment of Champakali's pregnancy, fell unconscious and had to be hospitalized. Niaz Ahmed, who helped care for Champakali for seven months was also hospitalized, overwhelmed with grief.
And Damini...
Damini stood, weeping by Champakali's body. At first she stood in one place for nine days, refusing food or water despite India's record heat wave. Her legs swelled up and gave way. She fell to the ground and layed on her side, staring at the staff with her eyes, moist with tears.
Doctors pumped more than 100 botles of glucose, saline and vitamins into her, set up fans against the blazing Indian heat, and tried to help her stand. But Damini remained on her side, weeping, her head and ears drooping, loose skin sagging and bone protruding.
She did not recover from the loss of her beloved Champa.
Damini died of starvation on May 5, 1999, twenty for days after Champakali died giving birth... to a stillborn child.

God's Little People said…
There's no photo of the real Damini and Champakali so here's I've used a model photo © by http://media.photobucket.com
June 9, 2009 at 11:22 PM

Sandra said…
Just heartbreaking :(( This is what elephants do: care about each other to the ultimate sacrifice. We could learn so much from them... Thank you for the link.

Mariette VandenMunckhof-Vedder said…
Dearest Joan,
Incredible story of true and unconditional love! No wonder that in the Hindu religion the elephant plays such a mythical role...
Hugs to you,
Mariette
December 26, 2012 at 3:41 AM

Christina said…
This story inspired a band to make a song. That song inspired me to name my kitten Damini.

I'll be back. I have to get more tissues.