Up against a mountain of flip flops 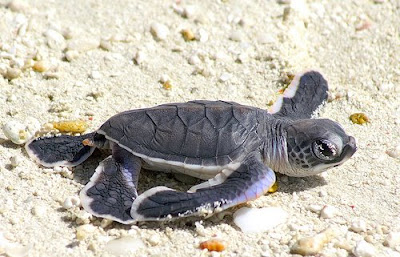 Yesterday I came across an article about two brilliant women entrepreneurs in Kenya. They've turned a massive environmental problem into an inspiring and thriving business called UniquEco Designs.
The beaches of Kenya are monthly littered with old flip-flops that is washed up by the tide. I've heard about plastic and rubbish in the seas being a problem - but flip-flops?!! Not just that, but during the four years the company has existed they've collected in the range of 80 tonnes of flip-flops.
The project started with the women of Kirayu, a small island on the northern Kenyan coastline. Three villages contributed to the clean up and more and more groups are now helping collect flip flops, including young men of Kibera, Nairobi's largest slum.
The flip-flops are recycled and turned into jewelry, sculptures and other pieces of art. Women in remote areas have few sources of income and the flip flops created an opportunity to add to their wealth. The project has now transformed the roles and influence of the women in their communities.
One other VITALLY important aspect of the clean up of all the flip flops... The marine animals were affected by the flip flops. Turtle hatchlings couldn't get to sea through all the rubbish and plankton feeders like whales would swallow the floating rubber and suffocate. But the beaches are now being cleaned up of the mounting rubbish, allowing wildlife to continue its progress.

Anna E said…
What a brilliant and creative idea with many good purposes. I too had no idea, there were flip flops in the sea! Wonder if they just slip off peoples feet during sunbathing on a boat?
August 31, 2010 at 1:43 PM