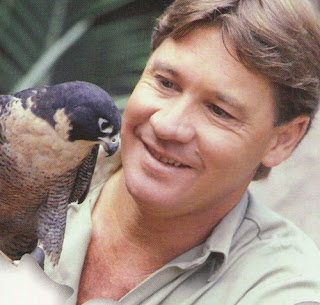 Yes, there probably are as many views about him as there are humans. A general view is that he was just a showman. I once asked a first-aid teacher at a zookeeper school about Steve Irwin (about the circumstances under which he died) and she cynically replied; "Well that was to be expected". I've often made reference to Steve Irwin when I've spoken about animals with people and I've often gotten a kind of overbearing look or comment. It always surprised me because even though I'm aware that yes, he did have a showman side to him, most importantly he did have a deep, sincere and dare I say profound love and care for animals. If you ever saw him with a seriously injured animal I believe that's where you would see his true core. His distress about the animal in distress was palpable and his facial expression said it all. And as mentioned in an earlier blog... you can't fake real feelings.

Anyway, the meassure of Steve Irwin was felt when he passed away. There was a real sense of chock and genuine loss around the whole world. I think he left behind a marvellous legacy full of respect, love, honour, passion and compassion for animals.