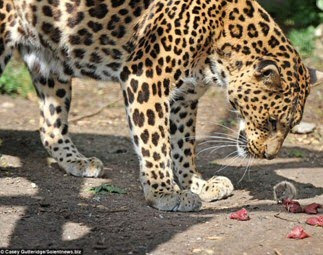 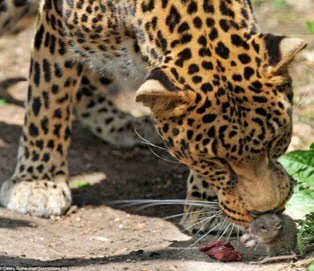 Yesterday Gods Little People got a fine award over at Such Life In The Tropics. We're delighted and hereby celebrate it with one of the happier stories :-)

"This cheeky mouse put its life in the hands of a leopard. The rodent does not look emaciated, thus we must assume that it was oblivious to the danger of a leopard. The only narrative that makes sense is that an English mouse had no experience of an African leopard.

Actually the great cat is a leopardess who is called Sheena - a resident at the Santago Rare Leopard Project in Hertfordshire, England. At one stage Sheena attempted to nudge the mouse away with her nose, but the determined little chap carried on eating.

It was Casey Gutteridge who captured this amazing scene he said: "I have no idea where the mouse came from - he just appeared in the enclosure after the keeper had dropped in the meat for the leopard. He didn't take any notice of the leopard, just went straight over to the meat and started feeding himself. But the leopard was pretty surprised - she bent down and sniffed the mouse and flinched a bit like she was scared. In the meantime the mouse just carried on eating like nothing had happened."

"It was amazing, even the keeper who had thrown the meat into the enclosure was shocked - he said he'd never seen anything like it before."

Sheena has been in the Santago Rare Leopard zoo since she was just four months old. She is one of 14 big cats in the private collection started by Jackie's late husband Peter in 1989."
.