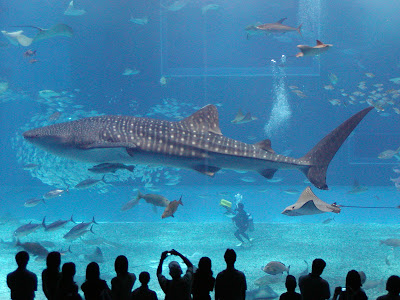 Yesterday I watched a program on Animal Planet about a woman wanting to overcome her fear. She was afraid of swimming with sharks (who can blame her??).
The program showed how she swam amongst small sharks, and to begin with... fear-ridden. When she overcame that she swam with bigger sharks - still more fear-ridden but also overcame that. The ultimate task was to swim amongst tiger sharks. Have a look at this picture and see its size compared to the humans right in front of it. Gods knows what runs through your head when you voluntarily throw yourself into the sea knowing there's a tiger shark down there. Well, she did! Terrified to begin with but gradually began to overcome it. More tiger sharks appeared (amongst all the 'smaller' ones too), and when she realized that they were 'just' curious she began to overcome her fear.
After that she went back to dive in with all the 'medium' sized sharks. It sounds peculiar... but it was really beautiful to behold. It was filmed a place where there's clear water and it was majestic to see them swimming together without the presence of fear.
In brain science they say that you get the same reaction inside your own brain as that which you observe. Well, it was a real palpable experience. It was like you could feel the fear go away... although I did appreciate that it was her jumping in the water!!