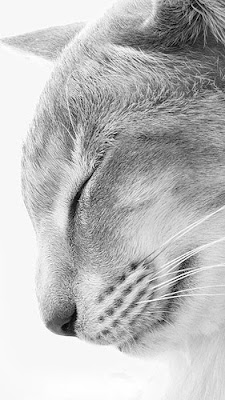 Some years back volunteering at a cat shelter, I met one extraordinary cat named Jessie. Well, she didn't actually have a name when she arrived at the shelter, but the girls decided to call her Jessica. To me she became Jessie... I thought it sounded gentler and she was such a gentle little soul.

Whenever I turned up for my shift I would be updated on all the 'newcomers' and this particular day (during the freezing winter months), I was told about a cat delivered by the national animal rescue. It didn't sound good at all. She was badly emaciated, didn't eat, didn't move, couldn't do her toilet and I was told that she smelt like death (these were the words!) and was suspected of having cat aids. I was told that no one really wanted to touch her because of the suspected cat aids, but now that I was 'filled in' I could go see the cat. And what a heart breaking sight. Apparently she had been spotted by several people in the neighborhood where she was picked up, for at least a couple of months. Most people had spotted the little emaciated cat with a limp, but no one had done anything about it. It's very unusual in my part of the world! Cats are generally considered someone's pet and strays is a rare phenomenon.

I found her sat upright with her head positioned exactly like the picture above. Although this picture is not Jessie, she looked a lot like this cat. Grey and white. She just sat very still with her eyes closed... obviously in pain and with not much further strength to go on. She quite clearly would not have made it had she not been brought to the shelter that day. I quietly opened the lid to her cage and stroked her a couple of times. I then (completely intuitively) put my forehead up against hers, so we sat forehead to forehead. Meanwhile I put my hand around her little neck and stroked her real gentle. With my mind I just embraced her with love and care and mentally wanted to let her know that she was now alright and in a safe place. I felt that she took it in, but she didn't make a noise. Apparently, for the next couple of days no sound was heard from her, although she did start eating and it seemed that her will to live reappeared.

Then, a few days later, when I came by just to check in on how Jessie was doing, something magical happened. It gives me goose bumps even when I think about it today. As I made my way down the corridor to where Jessie was sat, the girls told me that she seemed better but still not a sound, not a purr from her. When I stood outside the room with her cage and could see her, I called out to her. And then she let out a loud miauw!! The girls were amazed and excited... it was like the first sign of the little 'person' in there. We all squeaked with delight.

From then on Jessie slowly (very slowly) began her recovery. After she had a thorough check up by the vet he declared that she didn't have cat aids, but probably had been run over by a car some time ago because she had a broken her hip. And was extremely emaciated. It was a mystery how she'd managed to survive for as long as she had in her condition.

Many weeks later we discovered that on top of it all she was also pregnant, and as it turned out, already in quite an advanced stage. This really said something about just how emaciated she'd really been. Never in a million years would you have guessed that she was pregnant. Everyone had by then gotten completely caught up in looking after Jessie and I believe that just about everyone was involved (in one way or another) the evening she began to go into labour. It became an evening of great drama that I think none of us had quite seem coming. Jessie kept resisting the actual birth because the pressure gave her agonizing pain in her broken hip. Her unborn kittens were suddenly in great danger of dying because the birth took so long. The vet was called and after a lot of extreme pain for Jessie, she gave birth to two kittens. One stillborn due to the prolonged birth process. But the one kitten survived and a few days later Jessie even fostered a tiny kitten that had been rejected by it's mother.

After Jessie made a full recovery she and her kittens found a lovely and safe home with a kind family.

In spite of a truly gentle nature, Jessie had an amazing fighter spirit and she left a deep impression in me that I'll never forget.

sunshine said…
Awww! Beautiful story and even better with a happy ending. I'm so glad Jessie found you to give her the strength she needed and get better.

Oh I wish and hope that all animals in need will always find a kind human spirit to give them help and love!
October 12, 2009 at 12:17 AM

God's Little People said…
Yes, wouldn't that be something if all animals in need were able to find a kind human spirit. I wish and hope for that too!
October 13, 2009 at 4:32 PM