The story of Chino & Falstaff 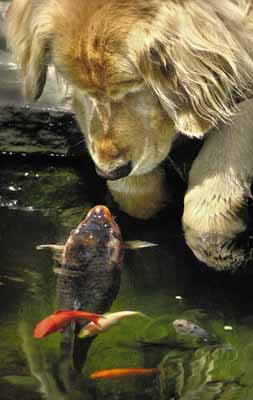 This is the story of a fish named Falstaff and Chino, the dog who loved him. The two met three years ago, when Chino’s owners, Dan and Mary Heath, traded Portland for Medford and a house with a backyard pond.

Falstaff, a 15-inch orange-and-black koi, lived in the pond. Chino, a 9-year-old golden retriever, did not. But every day, Chino would pad out to the pond and peer into the water, waiting for Falstaff to appear. Falstaff would swim to the surface, offering what seemed like a finny greeting. Together, the inter-species pals forged a strong bond.

“Chino just got real fascinated. He would lie there on the rocks and just watch the fish,” says Mary Heath, 58, a retired environmental quality worker. “This is one of the few things that’ll get him to wag his tail.”

The fascination continued when the Heaths moved to a new house and built a new pond. The fancy 2,200-gallon digs made a perfect home for Falstaff — and a perfect perch for Chino.

Today, the dog spends up to half an hour at a time following the movements of Falstaff and a small school of goldfish. Belly flat, paws wet, nose an inch from the water, Chino watches intently as the fish swim close enough to touch.

“Falstaff comes up sometimes and will nibble on Chino’s paws,” Mary Heath says.