The power of a sincere prayer 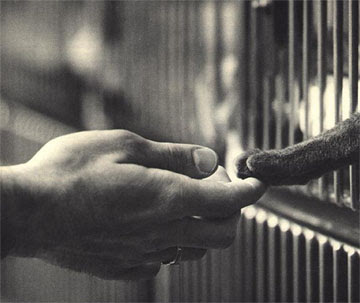 Just had a few days of hectic business in Greece. Knew I would have to brace myself being too well aware of the many homeless cats and dogs living in Greece. I've seen them during summer time... not a particularly happy sight. Starvation, dehydration pups and kittens ad infinitum spiced with ignorant (sometimes cruel) humans. No, nothing new about that like the synics might say. And like someone very wise once told me... you have to choose your battles. When dealing inside the realms of humans lack of humanity towards animals you'd exhaust yourself very quickly if you didn't come to some position about what you can or can't do. So...

When in Greece I naturally saw a number of stray cats like I've never seem before. Having just arrived at our destination my husband and I encountered a tiny high pitched miauw with an urgency that was clearly designed to stop you in your tracks. And it did. Underneath a car we found a tiny frightened ferel kitten. Don't know if it had gotten lost from it's mum or?? But we couldn't do anything. The road was busy and if we scared it further we worried it would run out on the road.

And yes, it was bitterly cold and stormy. Late at night the next evening, just as we were strolling across the town hall square, we saw two large dogs lying between each their sets of staircases. Just as we passed one of them walked up and litterally pushed it's body against my legs. It was skinny and shivering, obviously freezing cold. It being right in the middle of town it was obvious noone intended to do anything for this dog, so I did what I could in that moment and knelt down and embraced him for a little while. Afterwards I told him to go back between the staircases thinking that it would at least shield him a bit from the wind. When you have encounters like these (and there were MANY during the few days we were there) you can end up really frustrated and overwhelmed by the feeling of not knowing what on earth to do. When I'm in a situation like that - when everything else seems impossible... I pray. I pray that they may be safe and well, find shelter, have food and water and that a compassionate human will find them and look after them. Curiously... when I came home yesterday I found an invitation on my Facebook for a Greek orthodox blessing of animals service. I've never heard of the Greek church blessing animals before!

Today, wondering about the power of prayer, a wonderful little book came mind that I read several years ago. It's called "Embraced by the Light" and is the story of a womans profound near-death experience. In it she recalls all the insights she has from beyond. One of them is about prayer. She says: "I saw many lights shooting up from the earth like beacons. Some were very broad and charged into heaven like broad laser beams. Others resembled the illumination of small pen lights, and some were mere sparks. I was surprised as I was told that these beams of power were the prayers of people on earth. I saw angels rushing to answer the prayers. They were organized to give as much help as possible. They deligthed to help us and were especially joyful when somebody prayed with enough intensity and faith to be answered immediately. I did notice, however, that insincere prayers of repitition have little if any light; and having no power, many of them are not heard."

Well, there's great mystery and wonderment in that which we have no exact meassure of. If nothing else - itsn't it wonderful that something actually matters so much that we would actually make a prayer about it!
.

sunshine said…
Animals definitely deserve our love, care and prayers, but they not deserve what humanity does to them sometimes...

Every time I read your posts it makes me happy but in a way it also makes me sad to think that I can't do more to take care and help so many animals out there that need it...
November 5, 2009 at 10:40 PM