So the elephants march 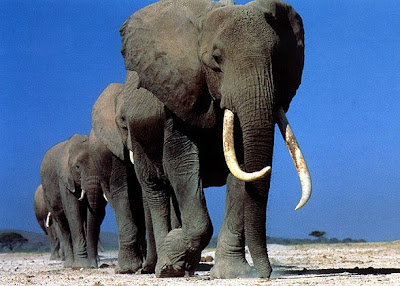 A curious fact about elephants is this: In order to survive, they mustn't fall down. Every other animal can stumble and get back up again. But an elephant always stands up, even to sleep. If one of the herd slips and falls, it is helpless. It lies on its side, a prisoner of its own weight. Although the other elephants will press close around it in distress and try to lift it up again, there isn't usually much they can do. With slow heaving breaths, the fallen elephant dies. The others stand vigil, then slowly move on.

This is what I learned from nature books, but I wonder if they are right. Isn't there another reason why elephants can't fall down? Perhaps they have decided not to. Not to fall down is their mission. As the wisest and most patient of the animals, they made a pact - I imagine it was eons ago, when the ice ages were ending. Moving in great herds across the face of the earth, the elephants first spied tiny men prowling the tall grasses with their flint spears. "What fear and anger this creature has," the elephants thought. "But he is going to inherit the earth. We are wise enough to see that. Let us set an example for him."

Then the elephants put their grizzled heads together and pondered. What kind of example could they show to man? They could show him that their power was much greater that his, for that was certainly true. They could display their anger before him, which was terrible enough to uproot whole forests. Or they could lord it over man through fear, trampling his fields and crushing his huts. In moments of great frustration, wild elephants will do all of these things, but as a group, putting their heads together, they decided that man would learn best from a kinder message.

"Let us show him our reverence for life," they said. And from that day on, elephants have been silent, patient, peaceful creatures. They let men ride them and harness them like slaves. They permit children to laugh at their tricks in the circus, exiled from the great African plains where they once lived as lords.

But the elephants' most important message is in their movement. For they know that to live is to move. Dawn after dawn, age after age, the herds march on, one great mass of life that never falls down, an unstoppable force of peace.

Innocent animals, they do not suspect that after all this time, they will fall from a bullet by the thousands. They will lie in the dust, mutilated by our shameless greed. The great males fall first, so that their tusks can be made into trinkets. Then the females fall, so that men may have trophies. The babies run screaming from the smell of their own mothers' blood, but it does them no good to run from the guns. Silently, with no one to nurse them, they will die, too, and all their bones bleach in the sun.

In the midst of so much death, the elephants could just give up. All they have to do is drop to the ground. That is enough. They don't need a bullet: Nature has given them the dignity to lie down and find their rest. But they remember their ancient pact and their pledge to us, which is sacred.

So the elephants march on, and every tread beats out words in the dust: "Watch, learn, love. Watch, learn, love." Can you hear them? One day in shame, the ghosts of ten thousand lords of the plains will say, "We do not hate you. Don't you see at last? We were willing to fall, so that you, dear small ones, will never fall again."