The spirit of friendship 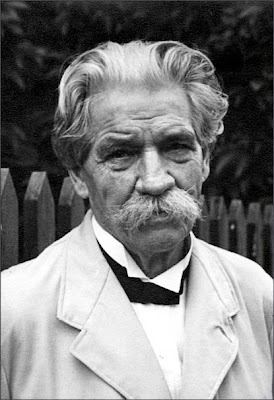 .
Please bear with me for posting such a long story, but I really want to share this profoundly moving tale of Albert Schweitzer's notion of 'reverence for all life'. It's a story from his time in Africa, told by Dr. Edgar Berman. I promise you its worth the read.
*****
"That particular morning there was a larger operating load than usual. Just as we were about to leave the breakfast table to begin work, a shriveled, kindly old native man of about seventy dressed in tattered clothes came onto the porch of the dining room and begged one of infirmiers to see “Oganga.” The infirmiers, like all the native help who worked with Schweitzer and who associated themselves with his fame and “magic”, considered themselves above their fellow natives. They wouldn’t let this man in. But he would not be turned away, and the commotion that ensued at the door prompted Schweitzer and a few of us to see was going on.

The old man was barefoot, his hair was matted, tears streaked his sweat-begrimed face. He looked totally worn out, as if he had been through a rigorous physical labour. He obsequiously and repeatedly bowed as he saw and recognized Schweitzer. Joseph then interpreted and told us how this man lived about forty miles downstream. It must have taken him two days by pirogue to get to the hospital.

In a choked voice, the man said, “I’ve brought my oldest friend up to see you, Oganga, because I feared my friend would die. Everyone in my village had told me that the white doctor’s magic could make my friend well, that Schweitzer was my only hope.” His friends had put food and water in his pirogue and sent him off.

Schweitzer was silent until the man had finished and asked, “Where is your friend?”

The old man pointed to a large woven-reed mat lying on the door. Schweitzer, surprised, turned to the mat. As we looked closely, we saw the nose of a dog protruding from one end. The straw mat was the means by which the old man carried his pet and protected it from the hot sun. The man gently opened the mat, revealing a large dog of unknown age or vintage which weighed sixty or seventy pounds and was cushioned by a worn blanket—probably the old man’s only one. The blanket was encrusted with blood. The dog was sick. His dry tongue hung from the side of his mouth, his eyes were glazed, and he was gasping for breath. The old man turned from Schweitzer for a moment and knelt beside his friend. He lovingly wet the dog’s parched tongue with a damp cloth that he dipped into a bottle of water he carried. All the while, he was telling how some hunters had accidentally shot the dog. “They didn’t mean to,” he murmured.

Schweitzer tenderly turned the dog on its back to examine it. The dog was obviously in his last throes, and incontinent. There was a large gaping wound in the upper abdomen that glistened with the lustrous sheen of busy flies and the wriggling of white maggots.

As stenchful as it was, Schweitzer felt no aversion to carefully examining the dog. He then ordered some paper napkins from the dining room to keep the flies from the wound. He told two infirmiers. “Transfer the dog to a stretcher and take him immediately to the O.R.” He put his hand on the man’s shoulder, and, his eyes glistening, said, “Your friend is very sick but we’ll try to save him.” The man threw himself at Schweitzer’s feet, held onto his legs, and tried to kiss his hands.

Schweitzer was visibly moved by the whole affair, all of us were. This anguished old man had used all of his waning strength to paddle two days against the rushing current. We also thought how that old, withered body had borne his sick “friend” off the boat and carried the heavy load up the steep hill to the dining room.

Schweitzer helped the old man up, keeping a hand his shoulder. He seemed to want to clasp the man to him. Almost as if to hide his feelings, he quickly turned to one the younger doctors who was scheduled to go to the O.R. and ordered him to get things ready and prepare to operate on the dog. “I’ll be down,” he said.

The doctor remonstrated that it would be an hour or two. First, he had to repair a recto-vaginal fistula of a woman patient.

For about the third time in a few weeks, I saw Schweitzer’s well-publicized anger. The two other times when the gendarme had brought in a boy who had stolen, another time when Schweitzer returned from a trip and found his native laborers all drunk.

This time his ire was aimed at one of his own staff. He remained quiet for a moment, trying to control himself. Then, giving the young doctor an ice-cold glare, he asked how long the woman had had her fistula. “Two years,” the doctor replied.

Schweitzer exploded. “She can wait another two hours; this man’s friend can’t!” He turned away.

As I strode down the hill toward the operating theatre with Schweitzer, I heard the generator go on. “We’ve done many operations on animals here,” Schweitzer said, they usually die of pneumonia. I think it’s from the anesthesia.” (Though highly flammable and dangerous in that heat, ether poured over a nose cone was frequently used.)

I followed him into the OR. The young surgeon was now not only ashamed but also contrite and would not look either of us in the eye. It always appeared to me that whenever Schweitzer showed his displeasure to one of his European helpers, they immediately became overtly and overly solicitous about their patients. But even more evident was their repentant attitudes toward Schweitzer—as if they re disciples who had in some way spiritually failed their Christ.

We watched the young doctor begin to operate; but almost before he began to debride (surgically clean) the wound, the dog gave his last gasp. The dog had not only been depleted from loss of blood but was also terribly dehydrated. Though he was given intravenous fluids, the heat and the two-day boat ride were too much. The bullet, which judging from the size of the wound, must have been a large calibre, had penetrated the side of the chest then went through the diaphragm and liver and out, leaving that gaping and festering area.

When the dog stopped breathing Schweitzer turned and went outside. His brow furrowed, shoulders hunched in sadness, he went over to the waiting native and took him to a bench. Sitting with him, he sadly explained, through Joseph, that they had done everything possible but had failed. His friend was no more.

Schweitzer then spent about twenty minutes telling the old man how much he admired the man’s love for a friend, but that he must immediately begin a new relationship with another friend.

“I understand your grief,” Schweitzer said, “but go home to your village. We will give him a proper burial.”

Schweitzer, with an arm around the old man’s shoulder, helped the man, now sobbing like a child, to where pirogue was tied up. We soon had him provisioned with food and water and wished him well.

I followed Schweitzer back into the operating room He wanted to tell the infirmiers where to bury the remains. As we walked in, everything was just about cleaned up; and the young surgeon was getting into dry chinos.

“Where is the man’s friend?” Schweitzer asked. Since that morning, he had not mentioned the animal as anything other than “the man’s friend.” Pierre, another infirmier, pointed diffidently to a trash can containing all of the post-operative soiled sheets, bloody sponges, and empty bottles piled in it.

Schweitzer’s eyes grew wide, his teeth clenched, he exploded into a roar. “How could you degrade that body?” he shouted at the young doctor. “Haven’t you learned that there is as much dignity of the spirit in death as in spirit of life—in any life—even this poor animal’s?”

The young doctor and all the infirmiers were actually cringing. Schweitzer went on, waving his arms and pointing his fingers, saying, “Never will I hear of this again, or you all leave.” He repeated himself. “Have you learned nothing? Do you still have so little feeling even for the spirit of friendship between this dead animal and that old man?” Trying to calm himself, he added, abruptly, “Give him a decent burial.” He mentioned a place on a hill where all pets were buried. Slowly, he turned and left.

This emotional experience had taken a lot out of him. Weary to the point of exhaustion, his head sagging to his chest and his feet almost too heavy to lift, he slowly shuffled toward a favorite place on a stone wall next to the river. He usually could be seen there in the early evening, petting one of his many animal friends—a deer, a pelican, a chimp. Today he sat alone, as if he had been beaten, as if he had failed someone."

Sewah said…
WE need the 'reverence for life' more than anyting. Thank you for posting it. I read the book reverence for life a long time ago. I am very proud owner of an autograph of Albert Schweitzer. I admire him as a theologian, but as you will know he was a world expert on Bach.
November 28, 2009 at 7:00 PM

God's Little People said…
Hello Sewah, thank you for your comment. I wonder how you got that autograph and imagine it must be very treasured. He was a truly extraordinary human. I believe his multiple talents can be attributed to the profound connections he worked for and established throughout his life.
November 28, 2009 at 7:13 PM

Anna E said…
Wow...What a powerful story, really awestriking. Makes me wonder what values and frienship is all about. Also puts a new perspective towards getting a new friend, when the old one has died, though the love for the dead will always remain...
December 7, 2009 at 2:33 PM