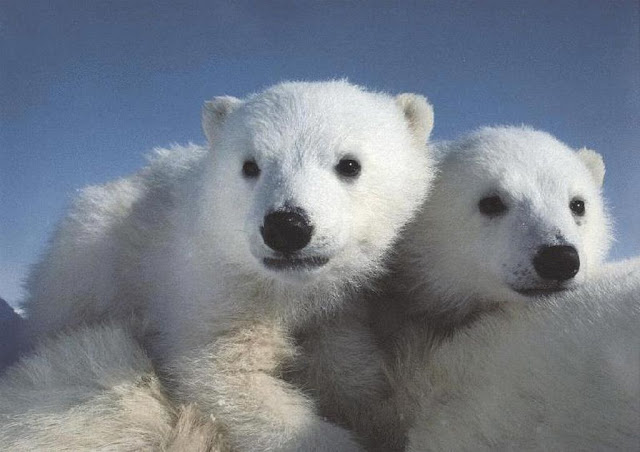 It's going to be one of those philosophical posts again...
Are you one of those people that felt the pain in the core of your bones when you saw Al Gore's "An Inconvenient Truth" - I mean that particular bit in the documentary where an animation shows a polar bear swimming in vain in the search for some ice to stand on and it becomes evident that it will drown because there is no ice to stand or live on?
I just read an article about two polar bear cubs dying in a zoo. It was a curious incident because they had been suckling and seemed to be doing fine, but suddenly on the second day they both became weak and had to be removed from the mother. They received intensive treament but died a few hours later. The only reason they could find for what had happened was that the mother bear had indeed suckled her cubs... but she hadn't been generating any milk.
I get kind of "the state of the planet" philosophical about these kinds of incidents. Just like it's a well known fact that any animal mother won't tend to a weakling in a litter (she might even try to suffocate it or push it out of a nest or den because she knows it won't make it)... I wondered about the polar bear with her cubs. Are polar bears developing an instinct that polar bear habitats are rapidly disappearing and therefore KNOW that there is no future for polar bears??
Yes, it's a rather disturbing thought. But just like when monkeys in one part of the world figured out how to wash sweet potatoes which made them eatable, monkeys in other parts of the world started doing the same (obviously without having had any kind of physical contact). Do animals have this kind of psychic ability, where they can 'relate messages' to each other? I happen to think that animals are uncorrupted. They simply and cleanly do what an animals are meant to do. Therefore I believe they have some of these abilites which I'm sure humans once possessed.
Could it possibly be that polars bears are relaying the message to each other that there won't be any polar bear habitat in the future???
.

sunshine said…
WOW! That's a scary and sad thought, but the worst part is the great damage humans have cause to our lovely planet earth and now every day we see more and more signs that there's no way back. I feel very sad for the polar bears.
December 3, 2009 at 3:48 AM