And the lion shall lie down with the lamb… 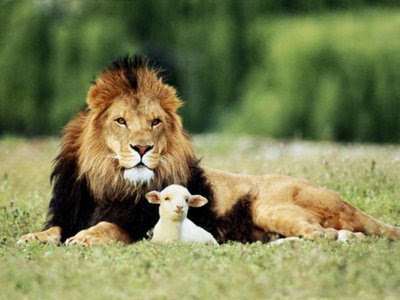 Ah, yes, how does one think about eating meat in the light of the kind of thoughts I'm proposing??
Well, we live in a world with a meat-eating culture. This is a thought that has often 'harrassed' me. I genuinely find it such an odd seeming practise. Not just that humans kill and eat animals, but that animals kills and eat other animals. Haven't you ever had the thought "Why is this so?" This is also something I've explored in an earlier post. I wonder if there ever was a time when humans and animals lived in peace - side by side without hurting each other. Maybe it's a naive thought, but I believe this might once have been so. There's this really evocative quote from Theophilus from 150 AC:
"When man diverted from the path of goodness the animals followed him. If man now would rise to his original nature and would not do evil any longer, then the animals too would return to their original gentle nature."
I somehow wonder too, if this savage seeming behaviour is something that once originated when humans strayed from their "earthly brief" and forgot why they were sent here in the first place. Anyway, this is a matter that could end up as a thesis on good and evil!!
To come back to the fact that we do live in a meat-eating culture... Given that fact that this is so, do what you truly can to only buy meat from animals that has had a chance to live a decent life. Meat from cows that has had a chance to live a normal and happy life in field. Eggs and meat from chikens that haven't had to spend its life in a square metre with 50 other chickens. It's our choice whether we want to support an industry that gives animals miserable living circumstances even though, UNFORTUNATELY, the lessening way to treat animals is the cheapest.
And just to finish on some other evocative words...
"Wolves and sheep will live together in peace, and leopards will lie down with young goats, calves and lion cubs will feed together, and little children will take care of them. Cows and bears will eat together, and their calves and cubs will lie down in peace. Lions will eat straw as cattle do . . . The land will be as full of knowledge of the Lord as the seas are full of water." Isaiah 11:6-9

Anna E said…
Oh "what a wonderful world" that is descriped, this truly feels like being realigned to ancient times, when the order of things was still as it was ment to be, and - who knows - perhaps CAN be again.. :-) Also makes me think of Paradise, where Adam and Eve had all the fruit availabel, they needed to eat, but the bible never mentioned, they had animals to eat! Thank you for the wise words and ponders - really uplifting...
January 12, 2010 at 2:20 PM