A dolphin will not desert another dolphin 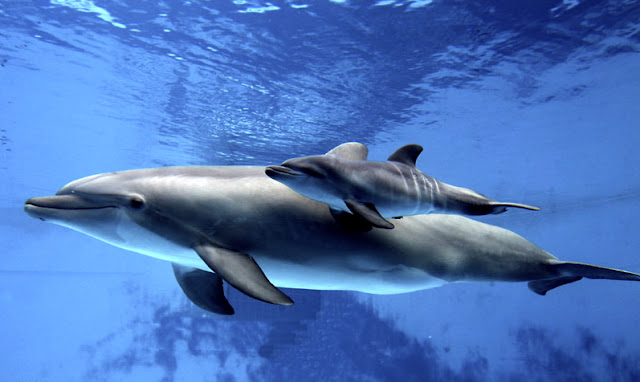 Well, would you believe it, but there's actually a book called "Random Acts of Kindness by Animals". I haven't read it yet, but it's gone on my wishlist. I just read this snippet, which is rather sad I have to say, but it is truly remarkable what it says about the profound nature of the dolphin. It really puts to shame those who doesn't believe in animal emotion. Here it goes...
"Because mother dolphins nurse their young for so long – eighteen months or about as long as human mothers nurse – the mother child bond is very strong. Many times a dolphin will not desert another dolphin who is in trouble even if it costs them their own life. When infant dolphins are trapped in tuna nets, their mothers will try desperately to join them. Then the mothers will cuddle close to their babies and sing to them as the both drown. The tuna industry’s official acknowledgment of this remarkable phenomenon is that most of the dolphins killed are mothers and infants."
Just like I felt, I'm sure you'll feel deeply moved by what appears like more than just a  maternal instinct. Apparently in recent findings in MRI scans of dolphin brains it's been proved that dolphin brains are intricate with a neocortex more highly convoluted than our own and that it is structured to allow for self-awareness and the processing of complex emotions. These facts are from dolphin expert Lori Marino at Emory university, and she goes on to say that the part of the dolphin brain associated with processing emotional information is particularly expanded.
Very much could be said about this, but it becomes kind of apparent why industries doesn't heed these kind of findings. Imagine the complications.
Image©Ardea

Anna E said…
Yes very very sad story indeed. However, that baby dolphin will definitely not feel deserted, and how could the mother dolphin "live on" without having tryed to rescue and comfort her baby. Makes me wonder, how I would react if my child or best friend was drowning and I couldn´t help them because I cannot swim - would I jump into the water anyway?...
January 29, 2010 at 12:13 PM