To all those sweet Valentines in the animal world 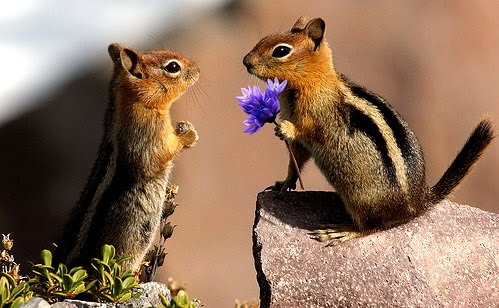 On Wikipedia Valentine's day is described as an annual holiday celebrating love and affection between companions. So what better day to give a nod of recognition and understanding to all those monogamous animals out there and to honour the fact that yes, they do indeed have some kind of feeling life albeit not entirely known to humans how it turns up in animals.
It is a known fact that trumpeter swans, mourn the death of their mate until they die of grief... I wonder how that would get explained away by the cynical skeptics.
Well, here's to all those darling mates out there and here's a list of just some of those monogamous animals...
Barn owls, bald eagles, bats, beavers, chinchillas, coyotes, emperor penguins, emus, french angel fish, gibbon apes, gray wolves, lobsters, otters, parrots, pigeons, prairie wolves, turtle doves, red foxes, red-tailed hawks, sandhill cranes, seahorses, silver-backed jackal, snow leopards, termites, white rhinoceros and wolf eel.

Apart from the birds mentioned in this list 90% of birds mate for life!
Happy Valentines Day!!

Anna E said…
Oooh, what at wonderfull wonderfull picture, SO sweet!!! And a happy Valentines day to you too, hope you have had a lovely and affectionous day :-D
February 14, 2010 at 6:04 PM