To Mary and other elephants... 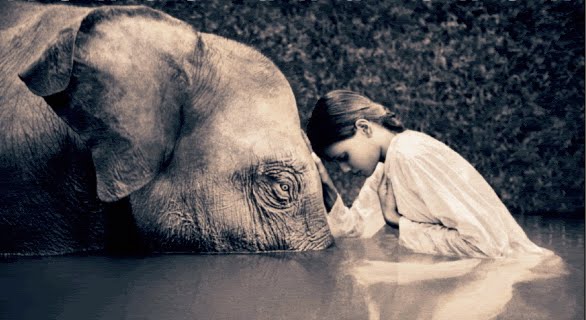 Before reading yesterdays article by Clays Evans, I'd never heard of anything so abominable as an elephant being hanged. If you read yestedays article you will know that he mentioned an elephant being hanged to death in 1916 for crushing the head of a man who, by the way, had poked and prodded it into a fury. I didn't believe that a story like that could be serious, so I looked it up... and frankly... the gruelling details leaves you gasping for air. To say that I felt in a state of disbelief doesn't even begin to cover what I felt.
In his book "The man who listens to horses", the great horsewhisperer Monty Roberts writes a dedication to horses where he apologizes for causing them to endure our lack of understanding for thousands of years. Maybe one can't take on all the wrong humans has caused animals throughout the ages, but if possible, I would just like to dedicate this post and apology to elephants - they truly are such gentle giants. And to Mary the elephant, who suffered the most unbelievable human ignorance.
Image ©photobucket.com

sunshine said…
I can't help but to feel ashamed when I find out about the many examples of human ignorance; but specially those that involve hurting and abusing innocent animals that I care and love so dearly.
March 9, 2010 at 9:48 PM

Anna E said…
Gruesome is the word that comes up in me, when I read the horrific thuths, and begin to think about the mindsets behind how these poor souls were treated!... Thank God that humans like you are ambassadours for animals, and can help to change things /minds (and I know you DO), when many people seem to have gone blind and deaf. All support from me!!
March 12, 2010 at 7:37 AM