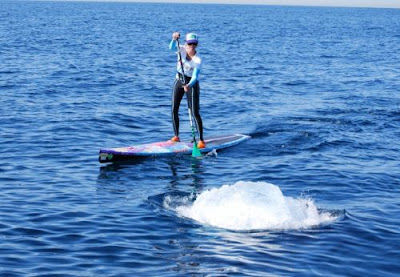 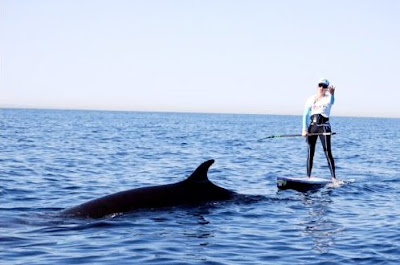 Have you ever tried it - praying for God to show you a sign? And to experience that it actually happened!!?
It makes your hair stand up in sheer awe. Surely must have been what this lady experienced... Seems to me that animals are particularly receptive to hearing and responding to prayers!

California surfer received whale of an escort during marathon paddle
Story by Pete Thomas Grindtv.com
When Southern California surfer Jodie Nelson set out Sunday to standup-paddle nearly 40 miles from Santa Catalina Island to Dana Point, she hoped it'd inspire her best friend, who has been involved in a long and exhausting struggle with breast cancer, to keep fighting.

Nelson, 34, whose mother and aunt are cancer survivors, also hoped her nine-hour test of endurance would raise money for two cancer charities and heighten awareness about a plight affecting millions of women.

What Nelson could not have known was that a 30-foot minke whale would swim alongside her 14-foot board and accompany the surfer as she stood and paddled for two of those nine hours, thus joining the cause.

"It was a day that all of us involved will never forget," Nelson said, in reference to Angela Robinson, her best friend, and the rest of a crew aboard an escort boat.

Minke whales are not commonly seen off Southern California, and those spotted by boaters are often elusive. So when a mammal Nelson named Larry joined her endeavor to become the first woman to make this long paddle, she took it as a sign.

"To me it was a total God thing," the San Clemente resident said. "We prayed at 4 that morning that God would reveal his beauty and creation and nature, and allow me to endure this long trek, so for me it's not such a huge surprise that this happened."

Larry did not merely swim close to Nelson. He rolled around repeatedly alongside her and blew bubbles beneath her board. A film crew was on the escort boat and CNN, Fox News and ABC are just some of the networks she says are interested in the story and footage.

sunshine said…
I saw this article yesterday and it made me so happy to read about another amazing animal/human connection, it's inspiring! Have wonderful Easter!
April 3, 2010 at 7:14 PM

Anna E said…
What a fantastic story! And yes, I have also tried to pray for a sign, and have sometimes got one. And when it happends, it is to me a confirmation, that there is a purpose and "plan" with my life, and it causes much humility in me.
April 8, 2010 at 12:21 PM