Where a cat belongs 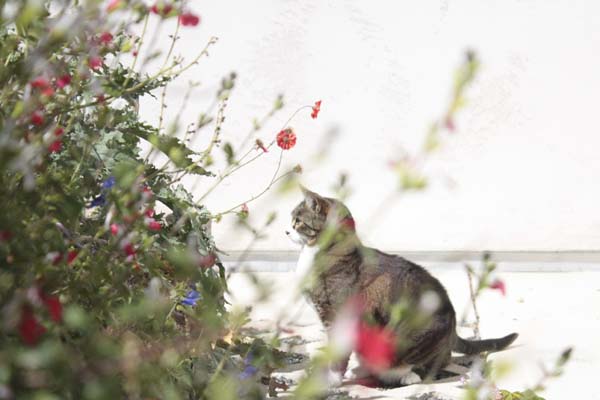 e
Been to New York quite a few times, and each time I have left I've always drawn a sigh of relief that I didn't encounter a cat in the streets of New York. Until this time!

One day, as my husband was willingly driving me down one of the big avenues in a wheelchair (quite an accomplishment in the streets of NY) we came by a spot where a homeless man sat with a cat. I felt my husband push a little faster, and I knew that he'd hoped that I hadn't spotted the man and the cat in the mass of people. But of course I did and my heart sank at the sight. The homeless man sat on the ground and the cat in a fixed pose next to him. Accompanied only by three bowls for the cat. One with food, one with water and one tiny little box which acted as a toilet for the cat. Don't even know how it was physiologically possible for the cat to do it in such a small box. But what pained me most was that it was evident that the cat had been trained to sit in this motionless position. And it caused the greatest sense of contradiction to watch this scene. On the one hand I felt such an ache on behalf of the cat not being able to exercise it's natural instict to roam around marking it's territory and having a magnetically recognisably place in nature. And on the other I had to feel pleased that the cat wasn't moving out of its spot due to the endless stream of cabs and cars on the huge avenue.
And no, it's not that I wasn't sympathetic to the homeless man. I imagine that he onced rescued this cat when it was a tiny abandoned kitten, and how it had become his only company. It's just the pain I felt at the cat having been trained into this kind of motionless life. As we passed I felt the greatest urge to turn around and talk with the man but decided not to as I felt I would get too involved in a story I couldn't really do anything about anyway. Frankly I felt in such a contradiction that I wasn't even able to give the man a bit money.  When I think about it now, it kind of bothers me as I'm certain he'd have used every penny on the cat. It was evident that he greatly cared in his limited kind of way.
Well, if nothing else, this pair has been in my prayers ever since.
It's not that I'm an expert telling where cats do and don't belong (cats are masters of that themselves aren't they!?), but for sure they DO NOT belong on Manhattan.

As always, I will try to counter act a story of something which I believe is fundamentally wrong in this world by an image of how it ought to be. Therefore this pretty little image.

Marg said…
That is quite a story. I don't know what I would have done. You have to feel for both the cat and the homeless man. The cat is probably what kept the homeless man going. And the cat sure couldn't do it's cat thing in downtown Manhatten. So maybe it worked out all right. We just have to look at it in a positive way.
Have a great day.
August 19, 2010 at 9:47 PM

God's Little People said…
Thank you so much Marg. I am certain that this cat keeps the homeless man going, and that's the positive I chose to see in this situation.
Thanks for stopping by!
♡
August 19, 2010 at 10:42 PM

Anna E said…
Amazing; Just as I was about to write a respons, a butterfly came into my office on the 5th floor :-) So first thought was, that it certainly doesn´t belong here, and possibly might not survive the weekend indoors, so I helped it to get out again. Just like a cat doesn´t belong on the streets in NY...
However, I wonder why you think it was trained to sit still? Could it be, that it perhaps wanders off to Central Park at night when the homeless man is asleep? I find it hard to believe it is "caged" like that.
But I also, like you, believe that the man has probably saved it when it was a kitten, and so there is a special bond between the two of them. And since we don´t know the destiny of another, it might be, that this man and cat serve the function of causing empathy and concern in some of the people passing by, like yourself and your husbond. But I know the feeling and pain, you descripe..
Last week I was on holiday in Jutland, where I was strawling around, shopping and looking for clothes on sale. Suddenly I heard the most moving and powerful irish song accompagnied by a guitar. I walked towards the place, where the sound came from, and saw a "vagabond" sitting on a bench singing and playing. He looked ragged and old, but the song went right into my soul and heart! I put some money in his bowl, and afterwards almost started crying. It just felt so clear to me, that life is about being able to express the passion of life and not putting up a facade, pretending I´m something that I´m not. And this man had no "identity" and yet had the strength and "pride" to earn his daily living by playing and singing these special songs.
It´s not that I want to idealize (idyllisere)homeless people, but to me at least it put a perspective to values in life.
<3
August 20, 2010 at 3:34 PM

sunshine said…
Hello Joan! Package has arrived, thank you so much for those lovely kitties and the postcard, please check my blog for today (Aug. 25th) and read all about it.
August 25, 2010 at 6:20 PM