Trying to build a nest 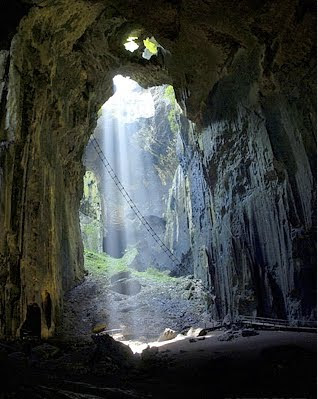 Maybe you've seen some of those spectacular documentaries about the last unexplored places on the planet? Watched one myself the other day, about underground caves... quite awe inspiring what's underneath us. It showed one of those amazing underground caves in Borneo, where the caves are full of swiftlet (isn't that a lovely word?) nests. 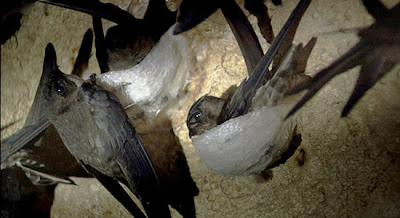 I thought it was so amazing to hear that the nest are made entirely from the swiftlets saliva and that it takes this little bird about 30-35 hours to build it. And then what happens? It goes on to describe humans "harvesting" these nests, because apparently the swiftlets will just build a new each time one disappears. Apparently these nests are quite a delicacy in China and  are used to make soup. Traditionally it is said that they have all kinds of  (for the human) health benefits (even though recent studies show that actually they don't have any particular nutritious value). Therefore entire nest factories are build to make these tiny birds keep producing nests, yes, just for humans to harvest them.
It prompted the thought just how callous humans become in their hunt for profit.
What I see is a beautiful little creature of God, trying to live its life in peace and quiet,  building a nest to try and have its version of a family life with off spring. Just try and think how much of its lifespan this little bird spends creating such a nest.
I don't know... sometimes I just become a little overwhelmed by humans sense of greed.
Images © via downbelow.co.uk & myswiflet.com

sunshine said…
WOW! Unbelievable place and those birds with their "nesting" skills.
So unfortunate that once again humans take advantage of other species and nature (for only their personal gain). I feel the same as you about humans sense of greed, unfortunately it's more than just a little, it's more like a lot in many ways.
September 9, 2010 at 10:33 PM

God's Little People said…
Hi Sunshine,
Yes it truly is amazing nesting skills.
It was just so disappointing to find that even in such a seemingly hidden and glorious spot, that even there humans were "at it". Seems like there's no hidden places anymore that humans haven't tainted in one way or another. It's kind of thougth provoking about the human condition.
September 9, 2010 at 11:58 PM

Chill said…
This is so sad, as if we are capitalizing on the industry of nest making for soup of all things. I saw a heartbreaking video of chickens in a chicken farm here in America where the poor chickens had been so genetically altered so that it would have large breast portions for food that the poor thing couldn't walk but a few inches before it would stumble and fall. Mans inhumanity to man wasn't enough so we had to spread it to the winged creatures and that is just foul ;) Sorry I couldn't resist. Sad, just sad.
September 10, 2010 at 5:34 AM

God's Little People said…
Hi Chill
Yes, capitalizing is the correct word. You should have a look at this website: www.swiftletonline.com - this is human greed in all its blatant hideousness.

Unfornuately I have heard of the chikens you mention and it makes me want weap. It seem there's no boundaries anymore when it comes to the kind of horrors humans are ready to inflict on animals. It's pure Frankenstein with no moral or ethical questions about the result.

Anna E said…
It makes me furious and sad at the same time; Not even an underground cave is a sanctuary to birds anymore! Imangine oneself building a home and decorating it beautifully, and then it all gets removed by a giant hand, and one is left with the frustration of building another and another and another..what else can one do!?
To me it says, that humans have fallen so low, that they don´t even bother to try to stay healthy by their own healthy processes! That there are thousands of other ways of getting healthy food like vegetables and fruit. Perhaps the story from the garden of Eden replays itself; Adam and Eve had all they needed, and yet the only forbidden fruit became their desire..! When will the natural order of life be re-established on this Planet? Hopefully before it is too late :-l
September 11, 2010 at 12:13 AM