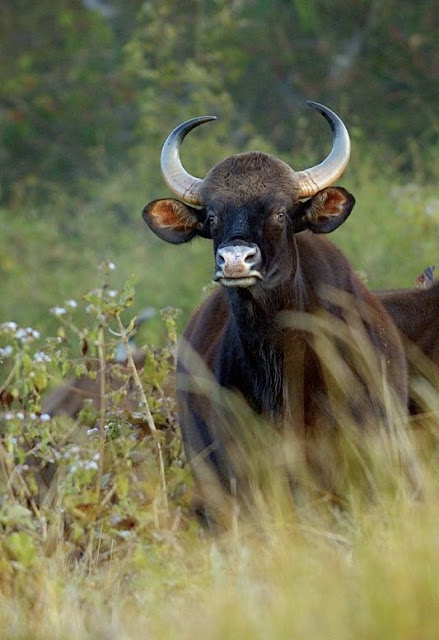 Indian Gaur cow
Maybe you saw the news footage a few weeks ago, of a Spanish bull running rampant during a Spanish bull fight? You actually saw the bull gather speed and then charge up into the crowd  - and amazingly jumping the bull ring fence! It almost gave me goosebumps. Animals really DO seem to be displaying some out of the ordinary level of intelligence in recent times. I swear, it's as if there were some intelligence in this bull wanting to get back at those humans seeming to be happily "entertained" by watching this bull being  poked and tormented. My thougths went something like this; "At last, a bull that speaks up for itself."
The footage I saw didn't show what happened with the bull afterwards, so I did a little research and was majorly disappointed to discover that this brave bull was killed after being removed from the scene. The only redeeming point in this story is that this bull won't ever again have to put up with humans' evil sense of pleasure of being socalled entertained.
Apparently quite a few people were injured, one of them a 10 year old child. I felt sad on behalf of the child and furious on behalf of the adults having brought a child along to such an event. Why not let the child wait until it is old enough to decide for itself whether it wants to be an observer of cruelty to animals. I don't even wan't to think what kind of mentality this would instill in a child towards animals.
Above, I'm happy to share some images of, well not Spanish bulls (it's just too sad), but some splendid images of an Indian Gaur bull and cow - in their NATURAL habitat. Nothing could be more beautiful.
These images are by Thomas and Shilpy - an amazing Indian couple, both wildlife photographers. You can find more of their wonderful wildlife photography over at Walk The Wilderness.

sunshine said…
I totally agree, that bull was standing up for himself and all the others that have been abused for a long time, if only people will wake up and realize what we do to other being for our "entertainment", sad :(
This kind of activity reminds of the famous phrase by Ghandi- “The greatness of a nation and its moral progress can be judged by how its animals are treated”.
September 2, 2010 at 3:32 AM

God's Little People said…
Hi Sunshine, you're SO right - it really is very sad. And yes, that phrase by Gandhi holds so much truth in it. If each nations greatness really was judged that way, it'd be a scary reality for many nations.
September 2, 2010 at 5:16 AM

Anna E said…
I totally agree as well, and can´t even understand, how it can be legal to bring children under a certain age to that kind of "entertainment"!! In a cinema you would not be allowed to watch a movie for adult over 15 years of age, if you were 10 years old. And this is even real and not "just" a movie!
I noticed the mighty horns on the bull at the beautiful pictures, and wanted to share this story: In my daughters school it is a tradition, that the children in 9th grade go to spend some days on an ecological /biodynamic farm to learn about and partake in work at the farm. One of the things they do is to bring home the cows from the field in the morning in order to milk them. Also they go for walks with the calfs in order to make them "bond" with humans, so that they don´t have to remove their horns. Only if they learn to trust humans (which of course only happens because they are being treated well) will the horns not be of danger to people meeting them.
SO that says to me, that there is really a lack of trust between cows and people in "conventional" farms, since mostly their horns are removed as a rutine!? What a shame, and what a great opportunity the children in this school get. If I were to decide, a visit to a farm like that ouht to be on the schedule of every school. Could make such a difference, I believe! :-))
September 2, 2010 at 4:00 PM

God's Little People said…
Hi Anna
That is such a lovely story from your daughters school. Wauw, imagine if every child had that opportunity, which actaully should be a very integral part of learning - learning to coexist in harmony with all creatures on this planet.

And yes, you are so right, what a ridiculous dichotomy that children under a certain age can't watch as an example a horror movie, but they can go watch a bull fight. Where's the sanity in that??