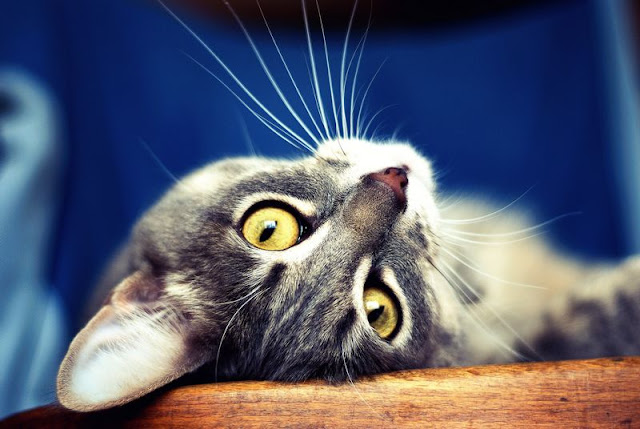 If you're kitty person you might already know a few vital insider facts about whiskers. I adore whiskers and find that they add such grace and impishness at the same time. Aren't whiskers a little masterpiece in itself?! Such beauty combined with such a great sense of purposeful function - purrrfection!!
Here's a few facts about whiskers...
A cat's whiskers are what are known as "specialized sensory hairs." Their extreme sensitivity can register very small changes in air pressure, enabling the kitty to avoid objects while moving around in the dark. It's also thought that they may also be used to establish the position of prey and help locate the exact position for the killing bite. This idea is somewhat borne out by the fact that cheetahs, who mainly hunt by day, have less developed whiskers than many other "night hunting" cats.
Whiskers are grouped in three specific locations on the cats head. The Supercilary whiskers are positioned above the eyes, the Genal whiskers to the rear of the cats cheek area, and the Mystacial whiskers (which are the longest and most prominent) are carried either side of the cats muzzle. The Mystacial whiskers are primarily used as an alternative sensing device when the eyes are no longer effective (i.e. in the dark). It's now though that there's a link between visual and other sensory input in the cat. Indeed, research indicates a degree of parallel processing takes place within the cat's brain. This can be demonstrated by simply touching the end of the whiskers - the automatic response is for the cat to blink.
It's also thought that whiskers are used a a sort of "magic sensing rod," enabling kitty to test their ability to fit through small places and get around obstacles. Cats are able to change the position of their whiskers depending on what they are doing —- at rest the whiskers are elongated, at 90% to the head, while when walking they are tilted forward to aid their sensing ability.
The whiskers are not just for judging the width of gaps or the proximity of objects. They are also mobile and help to indicate the cat's mood. In a normal relaxed "neutral" state, they are held slightly to the side. As the cat becomes more interested in something around it, the whiskers perk forwards, ultimately coming forwards in front of the muzzle. The cheek pads also seem to swell out as the muscles pull the whiskers into position. If the cat is fearful, it pulls its whiskers back alongside its cheeks to signal that it is non-threatening. This also makes its face look smaller.
You should never touch or manipulate your cat's whiskers - especially if in doing so the whiskers are moved in a position counter to their natural alignment, which can be uncomfortable for the cat, and sometimes downright irritating. It's also important that you never cut or trim your cat's whiskers. Regrowth of an entire set could take two or three months, and your cat would have a difficult time maneuvering around without them.

Your cat’s whiskers are not just a part of his good looks; they fulfill functions of vital importance by supplying sensory information about his environment and his prey and are essential to his survival. If you pay attention, you will gain a deeper respect for the amazing sensitive world of your cat’s whiskers.

Angie, Catladyland said…
First of all...what a gorgeous photo! I could look at it all day long :) And very interesting piece about whiskers. Thanks!
October 13, 2010 at 11:14 PM

Marg said…
That is a great post about whiskers. What a terrific picture too.Those whiskers are so very important. Take care and have a wonderful day.
October 15, 2010 at 12:25 PM

Chill said…
This is quite interesting. I have never known why they have whiskers, but now I do. Hope you are enjoying the Islands!
November 8, 2010 at 1:09 AM