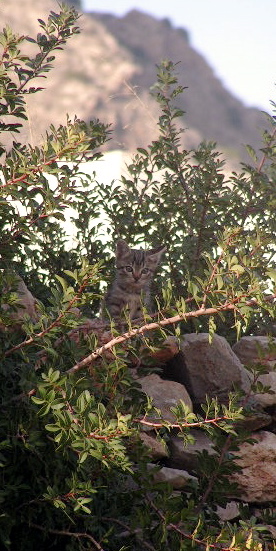 Hello!
So I'm back in Greece and have been busy settling and meeting a lot of lovely cat people. By cat people I mean those blessed souls who take on cat colonies varying from 20-35 cats. No, they are not hoarders but responders to a very real problem. Greece is known for its out of control cat/dog stray population and if you're an animal lover it's impossible not to respond to the plea of a starving and often abandorned cat or dog. Right now there's young cats everywhere having been abandoned by people who've fed them during their holiday but who've now gone back home. Many cats will die during winter time as restaurants close down and people leave (yes, go figure...)
Having just arrived here I've been a bit tentative feeding them in our own garden (even though I've already taken on a colony of about 10 cats residing by a local dumpster). But... there's been this one particularly insistent little black cat. It's been by the door whenever we opened it. So I caved! I started feeding it morning and evening.
This went on for about three weeks. One day my husband comes in from the garden and says; "I just saw a kitten in the garden!" So out in the garden I went, and sure enough, there's these irresistible little Ninja kung fu fighters tumbling around the garden having a blissful anaware kitten hoot (as long as it lasts). Turns out the little black cat (she's not very big at all herself) had a well kept secret of about of 2 or 3 kittens in the bushes. That might seem very charming (and it is), but also a bit frigthening because you really get a sense of how fast just a few feral cats contributes to an ever increasing problem. I instantly thought I'd have to get in some sort of close proximity to the kittens, knowing I would want to be able to handle them if possible, for the sake of neutering as soon a they're old enough. I managed for a few days to get a bit closer to the kittens (one of them being VERY brave in the image above - and very well camouflaged actually). But I think kittie mom thought that all the sudden attention had put too much focus on the den, so one night she decided to move them to another location. Maybe I'm responsible, but I'm hoping she'll start bringing them around when they're big enough to venture out and about for food.
Until then, she gets fed every morning and evening- and yes, in between :-)

Anna E said…
Hello!! Wonderful to have you back :-) And what a cute and shy kitten, adorable...I guess the kittens might come back, when they find out, where their mother gets her daily treat, I would! Hope you might be able to help some of them, and look forward to hearing more, as the adventure unfolds. Love <33
November 10, 2010 at 2:20 PM

sunshine said…
I missed you and your posts. It's so amazing all that you do for all those animals, I wish there was a way I can help you out, please let me know!
I wanted to thank you for the latest package you sent me, the fishes were just adorable but the best part is your lovely words about my blog. Have you received any package from me lately? Send one a while ago, let me know!
November 10, 2010 at 5:56 PM

God's Little People said…
Hi Anna, yes I also hope they come back - they already had the whiff of where their mother found her food. I'm keeping my fingers crossed as I'm wishing and hoping for their safety.
‹3
November 10, 2010 at 11:07 PM

God's Little People said…
Hi Sunshine!
Thanks so much for your sweet greeting.
So pleased you received the fishes :-)
Sorry but no haven't received any packages recently. Do you have my Greek address?
Hope you're feeling a lot better.
November 10, 2010 at 11:11 PM

Angie, Catladyland said…
I have another cat writer friend who lives in Greece and she always talks about the cats too! How sweet that you are taking on some of these babies. That kitten is just adorable. I think I'd be in heaven with all of those kitties!
November 11, 2010 at 8:04 PM

K. said…
Hello! I hope you will be able to do something more for the kittens, as sterilizing them and looking for an adoptive hearth. Luck! (Pardon for the translator on line)

God's Little People said…
Dear K
In Greece where I live the best you can do for a cat is sterilizing it. Unfortunately it is too much to hope for them to get adopted. Many view them as rodents and don't see the beautiful materpieces cats really are. I believe they are much poorer souls for having such a view and I would like for this view to change. I think cats are amazing in so many ways.
Thank you for vising and leaving a comment.
November 14, 2010 at 7:23 AM

Junelle Jacobsen said…
I love him. Look at that face. I hope you will keep us aware of how things work out. I am amazed at the cat problem? I think the natural predators must cut down the cat populations here (that is frightening, too). But my heart would leap out of my chest to see so many hungry cats all the time. God put you in a needed place~ :o)
November 18, 2010 at 4:21 PM