Custody over this glorious planet 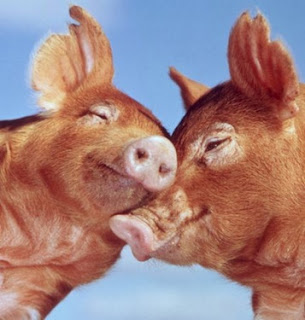 Wish I could put in a buffer between my last few posts and this one, but blogging is about what moves in life isn’t it – and sometimes the nature of one day can be very different from the next.
A few days ago I came to think of the story about Mary the elephant – the elephant that was hung in 1916. I could not believe it when I first read this story. But then today I see this news item that South Korea has culled one million pigs because of an outbreak of foot and mouth disease. That in itself is horrific enough - because they might not even have the disease - BUT they culled them by burying them alive to save money. The images filled me with such utter abhorrence and with a physical sensation I’ve never experienced before. It was a feeling in the chest of a mix of deep remorse, grief and sadness of just how low the human race can fall. In the light of the majesty of the human spirit and all things high and mighty that attends our God given experience here on this planet. I believe that all we humanly have was given to us in sacred trust… the custody over this glorious planet and all the creatures that live on it. Whatever happened to the human race to become THIS scarily detached from emotions, feelings and empathy. That this should become acceptable!

Anna E said…
That is so horrific, unbeliable and... can´t even find words that match..! Sometimes it can seem like a hopeless fight to want to make things right. However, to mention a few uplifting things; The danish government have now decided to make all female pigs go freely around in their stables within 10 years (and not only the pregnant ones, as is the case now) in order to make Denmark on the leading edge concerning animal wellfare. Yes 10 years is a very long time, but the mentality change was what I found uplifting (although there is of course an element of money inside it as well). Also a new TV serie is starting now, called "Dyrenes helte" - "The animal´s heroes" about people, who have devoted their lives to help animals in all kind of ways. So I hope this will have some influence locally and perhaps spread to other parts of the world. I utterly hope so!!
PS A wonderful image, that to me says how much affection pigs naturally have and are ment to have and show to each other. May God help to set things right again!
January 8, 2011 at 10:53 AM

sunshine said…
It is very sad, I can't seem to understand why if we all have the same creator and we are all made in the same "image" as God, why is it there are humans capable of such horrible acts against animals??? I also have a mix of emotions and feelings when I found about this kind of situations, but mostly I feel ashamed for the human race.
In another (very sad) note; last days of Dec. here on the North side of the island where I live, somebody killed 4 dogs that belong to a Canadian lady, looks like the killers put some very poisonous fertilizer in a dish of rice and beans and fed the dogs with it.
Every time I think about this horrible crime, about how she must have felt when she found her dogs dying (2 where dead by the time she found them), and specially when I think about how she must feel now after loosing her 4 amazing companion, I can't help but sob (which I am just writing this), tears come down my eyes, it's just so horrible and so sad that humans are capable of such crimes. :(
January 9, 2011 at 3:59 PM

God's Little People said…
Sunshine I feel so sad about the incident you mention. That poor lady, how do you recover from knowing that someone could deliberately do this to your beautiful friends. Unfortunately it is quite common in this country (Greece) and these kinds of inhumane acts truly does bring tears to ones eyes. "Humans" like this shouldn't be called humans, because this kind of behavior is not human, but you can't call it animal either, because animals are not DELIBERATELY cruel to other animals. Takes a lot to tip me over the edge of fury, but this gets me going like nothing else.
January 9, 2011 at 4:57 PM

Marg said…
It is just amazing to me how very cruel people are to animals. That story about the pigs being buried alive is just horrendous. Horrible. What makes me so mad is people that have animals and don't take care of them. Don't feed them or anything else. Sorry about that person that lost her four dogs. That is horrible too.
Take care.
January 9, 2011 at 5:03 PM