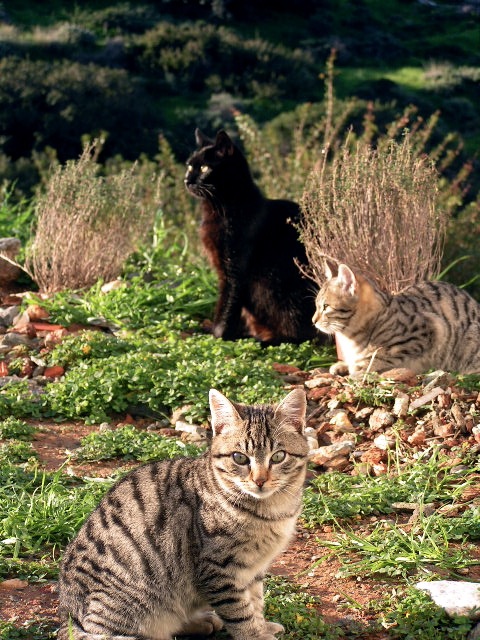 Thanks again to all you lovely people out there for your encouraging comments.  It's just the sweetest nectar! Well, it's been a while since the last post but here I go again with an update from the Greek hills.
So one day I'm loving how close I've finally managed to get to Tiny and his brother. Yes, turns out Tiny is a boy! Tiny and Co. is letting me take photos up close and personal - and Tiny ate crunchies right out of my hand. Can you imagine my exhillaration!! Soft little whiskers tickling the palm of my hand... bliss. We're talking feral kittens who vanished at the speed of light at the mere (even at long distance) sight of a human approaching when I first spotted them back in early November. Oh, how I love the process of gaining the trust of a timid or shy animal. 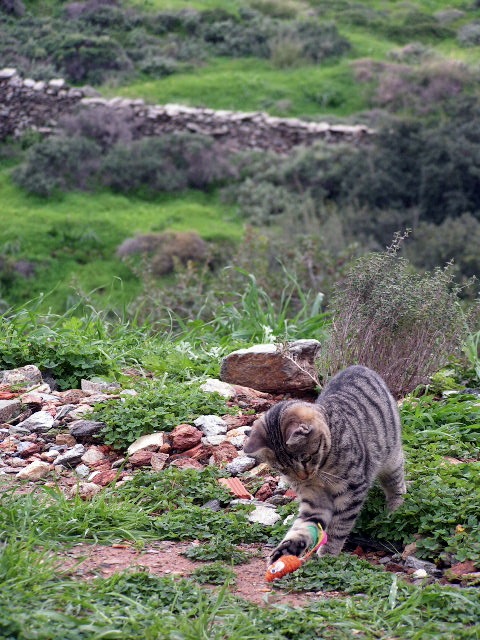 One morning they each had a toy mouse - thougth it would be fun to see how they would react. Tiny was very careful and tried to see if it was possible to finish the mouse off in a gentle and dainty way... 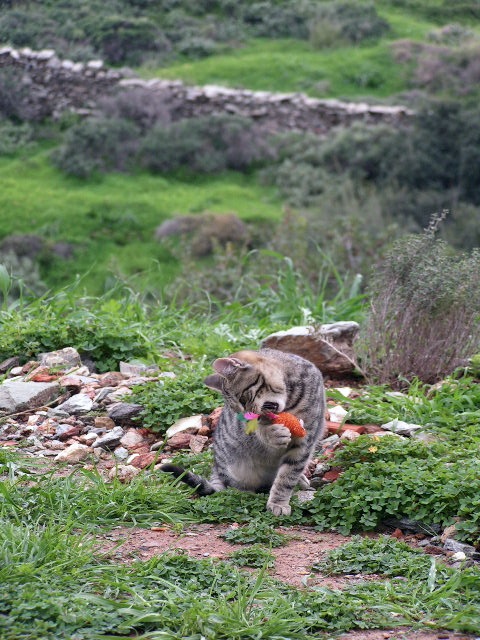 Whereas brother Ninja lived up to his name in full and went staight for the "kill" - sharpened claws, sabertoothed fangs, honed suffocation techniques, flying kung fu moves and what have you...You don't even see a mouse in the picture, so fierce was the wrestle :-) 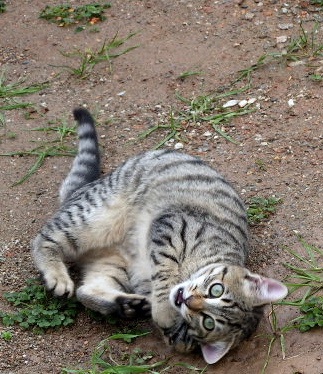 It was over within minutes and Ninja was very well pleased with his stellar efforts. He was very keen to show brother Tiny how it's done... but Tiny was content with the slow kill. It was really cute to see their different their natures. 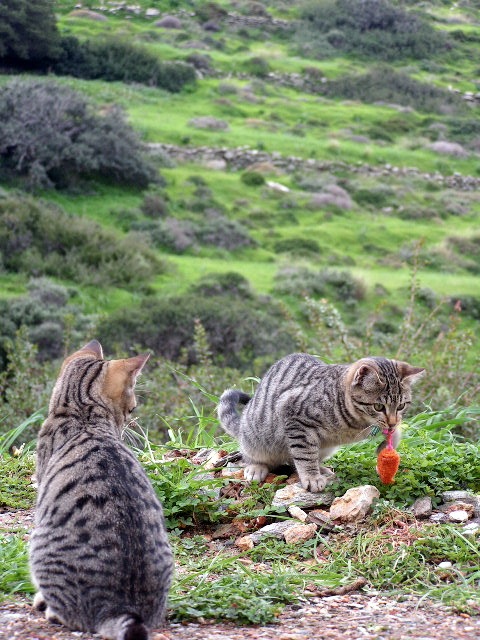 Knowing that another cold storm was coming I went out to buy a little house that could house the whole little family. Nothing was spared so the house was padded with a big fluffy pillow and wollen blankets (yes I know, any cat person in this part of the world would think I've lost my marbles!!) - shouldn't all cats have a warm bed?! But alas, they never even got to spend a night in their new house. I'm not sure if it was the wind, the sound and sight of other cats or the fact that kittie mommy is pregnant again (oh dear!)... but something made them move a few hundred metres down the road into an old abandoned shack. It took me two days to find them in their new location. Two hungry kittens finally gave it away when I repeatedly called them. Luckily they've been fed a rich a nurishing kitten food for two months so they're well bolstered. But... I miss their presence in the garden. How can you not grow just a little bit attached to a couple of cutie pies like these when you've fed them three to four times a day for two months. Anyway... at least I know where to go to feed them. But I sure wouldn't mind if the wind changes direction again and send them straight back into the garden!

Catsparella said…
Such beautiful photography! I especially love the first pic! I'm sorry to hear they left the garden - hopefully they'll find their way back soon!
January 26, 2011 at 5:20 AM

Anonymous said…
Wunderful picture. They are so cute. I think they had to leave your garden. It is her nature to be free and unbound.
January 26, 2011 at 7:23 AM

Marg said…
Those two sure are cute. What a shame they left the garden. I would put the house up anyway and see if they come back. Wouldn't it be great if somehow you could catch them and at least have them neutered. I had the same situation here and I finally caught all of mine. It sounds like you really have the patience to do it. Keep feeding them so they begin to trust you. But you know that. Good luck.
January 26, 2011 at 12:31 PM

Angie, Catladyland said…
I always love your photography...absolutely stunning. Sorry they left your garden -- I sincerely hope they return :)
January 26, 2011 at 12:34 PM

Anna E said…
Yes Cutie pies, thats the word that goes with those kittens! And I´m sure, that they know now, that in your garden help can be obtained, and that their lives can be in safe hands and process there, which is quite something in this world, and particularely in your part of the planet. Thank God that no damage has happened to them, they´ve probably just felt ready to "leave home", and move a few "blocks" away :-)
January 26, 2011 at 12:36 PM

sunshine said…
I love reading all your updates on those lovely kitties, the pictures are all full of tenderness, thanks for sharing!
January 26, 2011 at 2:17 PM

SASS....Sammy Andy Shelly Sierra said…
We are purraying they will move back to your garden.....and to the house you have there now for them.

We purray that they will become tame and be placed in wonderfully loving forever homes.
January 26, 2011 at 5:34 PM

Junelle Jacobsen said…
They are gorgeous! Look at how beautiful their coats are? My word, better looking than my little house cat!

They must make you smile all day to watch. Thank you for the update~

Luzia said…
It´s such a wonderful image with the little family! I hope they will find her way back home to you?!Hugs from Luzia.
January 26, 2011 at 11:27 PM

Cat and DOG Chat With Caren said…
you are truly an angel.....this post brought tears to my eyes.
These kitties looked so happy with the toys you brought to them...I pray they find their way back to you.
I do not think you are crazy even one bit for buying that house...I think you are truly a gift
Your photos were enchanting xoxo
January 27, 2011 at 3:17 AM

K. said…
It is necessary to have patience with the wild kittens. Thanks for all your work with them! Kisses from Chile. Karin
January 28, 2011 at 8:57 AM