Who is watching your back 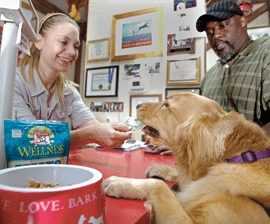 sunshine said…
Great article that once again shows one of the many benefits of dogs; besides watching our backs, they are great for companionship, love, loyalty and bring happiness to our lives!!!
February 3, 2011 at 5:36 PM

Anna E said…
Wow!! An amazing story! And it makes so much sense. When I was a child I used to say a goodnight prayer every evening, and couldn´t really go to sleep before it was done, feeling that God was watching over me. Yes, safety and comfort is so important, and I hope other people with PTSD will benefit from the knowledge of the story you told.
February 3, 2011 at 11:23 PM

Junelle Jacobsen said…
Oh that gave me the shivers. I think that is so beautifully told~

I can't imagine the trauma of soldier's lives, but I know from my own hardships that nothing has helped heal my heart like caring for the animals in my life (oops...the caring they are doing for me).

Angie, Catladyland said…
This is wonderful. When I feel depressed about the bad that's going on in the world, I try and remember that there is always more good happening. Always :)
February 8, 2011 at 4:47 PM