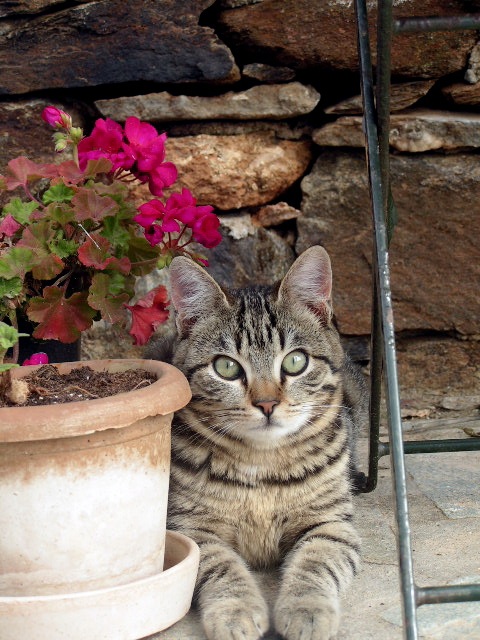 A few weeks back someone kindly asked about how Tiny is doing. Tiny and his brother are doing very well and they have become a charming addition to the garden landscape. They goof around and entertain on the terrace on a daily basis and almost tumble inside the kitchen every morning when I open the door to feed them. It’s hard to believe they’re the same extremely feral kittens I spotted in the garden almost 4 ½ months ago. Now I’m able to stroke them whilst they eat (yes, a little bribe goes a long way!). When Tiny was at his worst with a serious respiratory infection I made a little video of him and his brother. I actually had to erase the video because it was too painful to watch. Tiny shied away when his brother jumped on him wanting to play – he was simply too weak to play. But… today they jump on each other, fly through the air and perform all kinds of silly (and sometimes naughty tricks). They’re delightful! 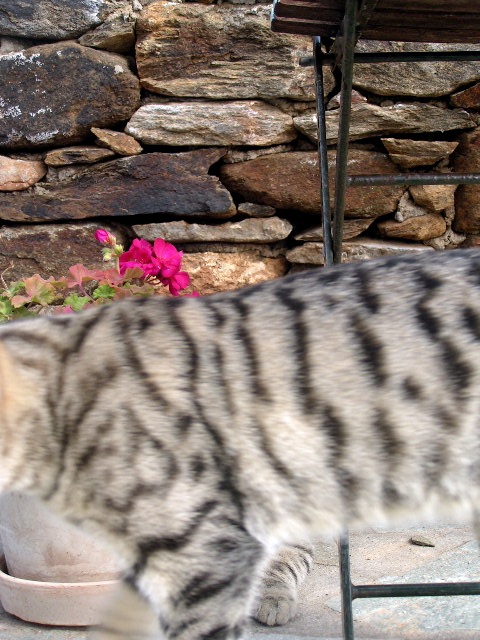 Trying to take a pic of Tiny!
The other day I took a few shots of them having a leisurely time on the terrace. As you can see – Tiny didn’t get his name for nothing. Brother Ninja has (we like to joke) three more stipes than other tabby kitties. I was in the middle of taking a few shots of Tiny when the never-ending stripes interfered. 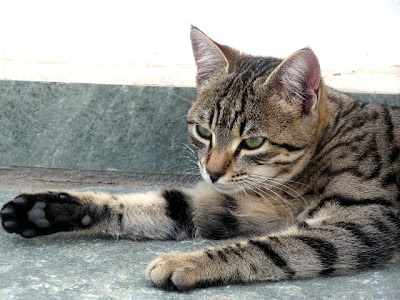 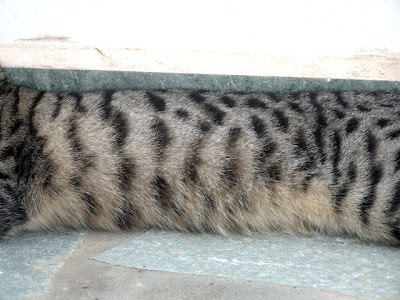 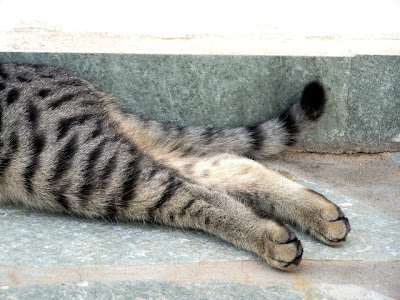 Ninja is like a tabby who comes in three instalments… front, miiiiiddle and back. Just have a look for yourself!
Images ©Joan Rachlitz Bowell

Marg said…
Oh goody, pictures of those two wonderful feral kitties. They are so good looking. So glad you decided to bring them into the house. They look like so much fun. Sure glad they turned out so well. What fun seeing their pictures. Take care.
March 9, 2011 at 10:37 PM

Cat and DOG Chat With Caren said…
this cat reminds me of my Angel Bobo in so many ways. Except Bobo had a white "bib" on his neck and 4 white paws. He had those stripes/spots. Tiny is just gorgeous. These kitties are truly blessed to have found YOU.
I would love to see them in "pawson"
xoxo
March 10, 2011 at 1:50 AM

sunshine said…
I love those pictures, both kitties look so much like my long lost cat Tica, I miss her everyday!

Anna E said…
Thanks for the lovely - and funny - pictures, and SO good to se you "online" again :-) Tiny´s eyes have such a special and magic colour. Have seen that colour before somewhere, like greyish-green, but dont know what to call it. Anyway, awesome.. :-))
March 10, 2011 at 11:01 PM

Sylvia said…
Hello Joan,
What a lovely post, the first picture is so beautiful !
Tiny and Ninja are so cute, reading their story made me think of my Moesj, she's a feral cat too. She's still very shy but so sweet.
Have a nice weekend,
Sylvia
March 11, 2011 at 6:39 PM

From the Heart said…
Just a note to thank you for becoming one of my followers. I pray that you will be blessed by our Creator, God, our Heavenly Father when you visit.
March 19, 2011 at 9:32 PM

Milo and Alfie Marshall said…
Oh how beautiful! Thank you for helping tiny and his fellow ferals.
March 23, 2011 at 9:09 AM