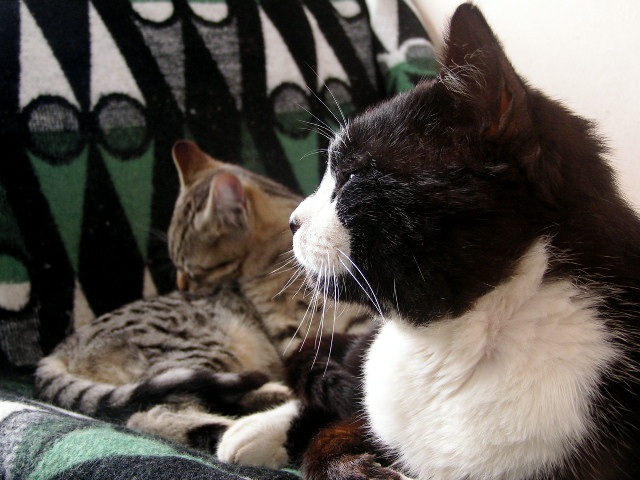 Mr. Moggles has made a few photographic appearances, so let me introduce him a bit further. I first noticed him a cold evening in early January. He was skinny and rummaging around a local dumpster and in the search for a pretty girl. I started leaving a bit of food for him, because there's not really any people living in this area in winter time - hence no scraps in the dumpster to live off. Well, he soon realized there was one house where other cats seemed to thrive and there was a pretty girl too! Silly as I was I thought the pretty girl was neutered, because she showed no interest in the boys whereas Tiny and Ninja's kitty mom was off having fun with the local boys in no time (yes, I've learned a lot about how fast you need to be about neutering!!). Little did I know that just because a girl shows no interest, it doesn't mean you can't pursue her. Whenever Mr. Moggles was fed he was a  real friendly cat but when he pursued the girl he'd laid his eyes on - phew... you could seriously talk about a split personality. One day he chased the poor girl up a tree and when I found the two of them up the tree 8 hours later I thought it was time to rescue the poor girl. You could talk about a battle of forces - no way was he gonna come down! I physically had to push him down with a broom and there was a lot of hissing and spewing of mouth water. Ironically, when he was finally down, it was a piece of cake getting him in a transport box and off to the vet I went to have him neutered. When he came home the next day I let him have 24 hours inside to recover. You simply wouldn't believe it was the same cat. He turned into a cuddly jellyfish and rolled on his back to expose his tummy for rubs. He was perfectly content will all the food,  fuss and TLC. Well, that was the beginning of Mr. Moggles settling around here. I kind of thought he'd be off again some day - but he's stayed ever since. He will steal your every ounce of attention (he follows me everywhere) and will do what it takes to avert my attention from the little ones - Tiny, Ninja and now Benji. 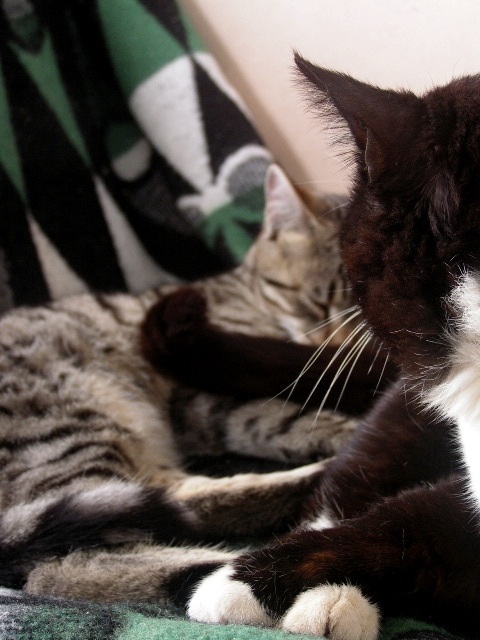 The other day when I was taking some new close ups of the little ones all the attention with my camera got too much for him and he couldn't resist jumping up right in front of the camera to steal the attention.  If you look at his face you can almost see him conjuring up a plan for how to also appear in a real charming way in the images, so he seemed to in the above image to turn his head toward Ninja as if thinking; "Well, maybe if I wash the little one." 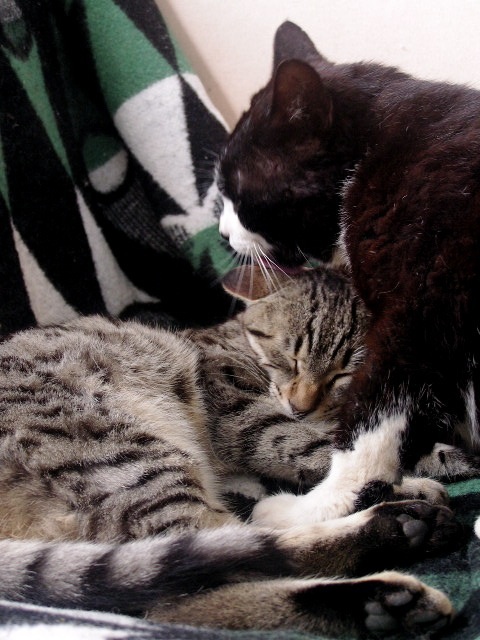 e
It worked! I of course couldn't resist capturing Ninja getting the first proper wash since his mom left in early January. 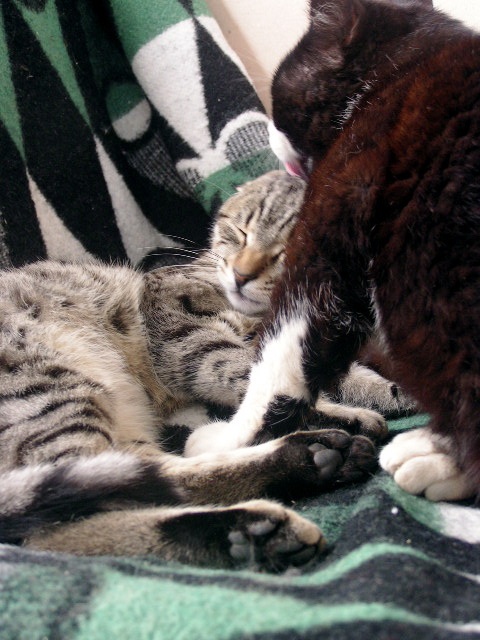 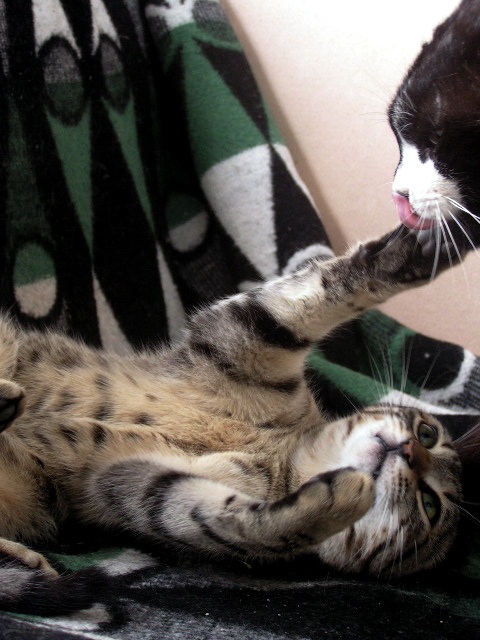 - but was left asking for more of that nice TLC which only another feline friend can give. It didn't last too long - Mr. Moggles seemed to think that it at least got him in the images. But it did give him the merit of the title nice uncle Moggles. He doesn't care much for the company of the adult cats around but he seem to love the company of Tiny, Ninja and Benji. They play beautifully together and he knows to be gentle with them. Even Benji (to his bewilderment) got a great big wet facial slurp yesterday. Knowing they have different backgrounds, there's something very endearing about seeing how these four male cats have teamed up.
Images ©Joan Rachlitz Bowell

sunshine said…
Families come in all sort of shapes and color, this one is definitely a match made in heaven. Those kitties are very blessed to have you!
April 7, 2011 at 6:19 AM

Angie, Catladyland said…
Beautiful. Your posts always leave me with a smile. Any kitty (or person) that crosses your path is a blessed one :)
April 7, 2011 at 1:27 PM

tiptoethruphylsgarden.blogspot.com said…
How precious of him washing the other cat!You are an angel for taking good care of them,phyllis
April 7, 2011 at 3:12 PM

Marg said…
Nice to meet you Mr Moggles. We were wondering just who you were. Glad that human got you all fixed up and you decided that you liked it there at that super home. Good for you to wash Tiny.

By the way could you tell your Mom that our Mom ordered some of those great mice from that place that she recommended and they are very popular. Little Bit doesn't chew on them yet but at least she likes the little mouse. Thanks for telling us about them.
April 7, 2011 at 3:13 PM

Anna E said…
What an endearing story and lovely photos! Appears to me, that the four of them have found each other in a neutral zone, a common purpose, a second chance of (a wonderful) life in a clean and TLC environment, in your garden and presence. No wonder they team up in an ecology like that! :-))
April 8, 2011 at 9:57 PM