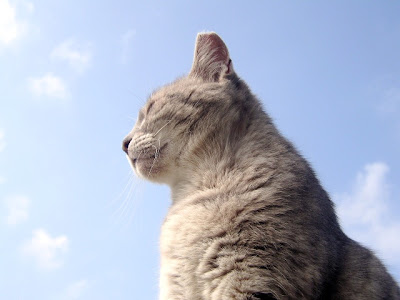 A question appeared in the comment box in the last post - how many cats do I have? Well, first of all, I believe they have me more than I have them :-) But to answer the question - it varies. In this garden there's somewhere between 12-15. A few comes and goes. Then there's two different small colonies around the island (one of colonies having been abandoned by the person who fed them) so all in all I daily feed around 25-30 cats. Apart from Tiny, Ninja, Benji and Mr. Moggles, here's the local motley kitty crew (as a friend so endearingly named them all) in order of appearance. Well, first of all above there's Stempel (named by a child and refers to the kneading movement a cat makes). I discovered from an image taken a few years ago that she was actually here before we arrived. I've got no idea who she belongs to, but she is extremely friendly and has never walked away. She's definitely the matriarch of the place and gently beats up newcomers until they know who's in charge!! 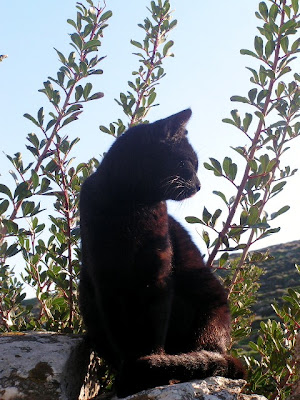 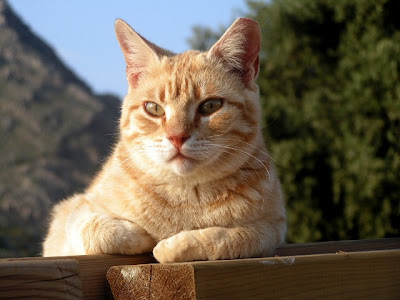 Eddison (above) and Molly arrived at the same time... after a day of a very serious torrential rainfall. I think they literally got washed down the hillside. They are the sweetest little couple - a boy and a girl (not sisters and brothers - he is an adult, she is a kitten). They seem to depend on each other for everything... warmth, sleep, eating. Eddison is very shy and sweet... 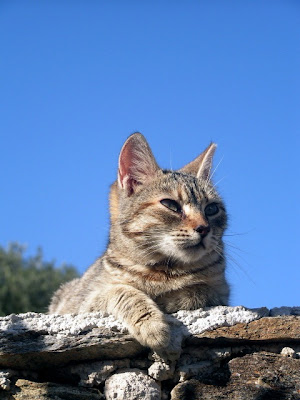 Molly is little and scrappy! She hisses at all other cats but is really a little dearie. 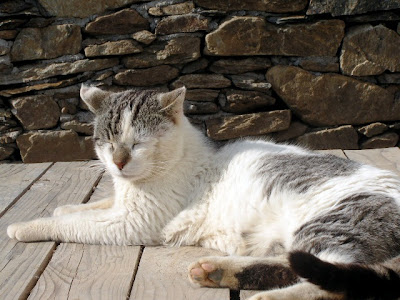 Humphrey seemed to belong to a house a bit further up the road, but the people left at the beginning of January and after that he just got skinnier and skinnier. He seemed to get depressed too - you'd never see his tail up in the air - so I decided to encourage him to come for food and for the company of the other cats. He tentatively accepted (I believe he's been used to being a single cat), but he was of course hungry and he actually seems to have taken to the company very well. Now his tail is in the air whenever it's feeding time! 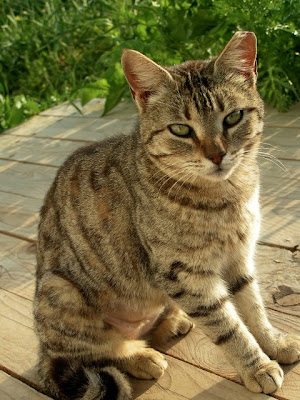 Ruby arrived after a snow storm in early March - very emaciated. I think she needs the reassurance of knowing there will be food, because she literally sleeps next to the food box. She is very sweet and appreciative. 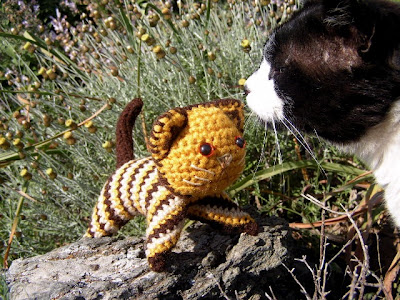 Last but not least - the very latest newcomer - a tropical cat named Harvey. A darling arigumi creation by my sweet blogger friend from Grand Cayman. As you can see he has got the approval by Mr. Moggles - no hissing or fighting, just gentle acceptance :-) Thank you Sunshine, we all love him!!

sunshine said…
Awesome post, loved seeing some of the members of the Motley Kitty Crew, they are all adorable.
I am so happy to know that Harvey has arrived to a place where cats are loved and cared for, I can't think of a better home for him!!!
Maybe one day we will come visit him in Greece, or you could bring him back for a visit to the place where he was born!
April 12, 2011 at 4:39 PM

Marg said…
WEll sure nice to meet all of you. You are so lucky to have such a nice person to come feed you all the time. You are all so very cute. Thank heavens Humphrey found you. And that silly Ruby sleeping by the food dish. She reminds me of the BG that came to live with me. That is her big thing, just eat, eat, eat. Her whole life is eating. We now need updates on all of them. Then you will know how I feel trying to write about all the residents that live here. Take care. Thanks for all the pictures.
April 12, 2011 at 11:37 PM

Grace said…
So fun to meet your brood of kitties. You have a cute bunch. I bet you could make a nice calendar with all your beautiful cat photos.
April 12, 2011 at 11:55 PM

Vicky said…
Thanks so much for taking care of those who find themselves without homes or support. It takes a special sort to take on that task.

Cat and DOG Chat With Caren said…
I couldn't say anything better than Vicky above said...I concur! This touched my heart (as always)
xoxo
April 13, 2011 at 2:28 AM

Catherine said…
So many beautiful kitties you look after! Oh you have a big heart my friend ~ love it! They are all very lucky kitties to be loved by you!!
xo Catherine
April 13, 2011 at 12:47 PM

Julia Williams said…
They are all just adorable, and you took such great pictures of them! That little arigumi is cute too.
April 16, 2011 at 10:45 PM