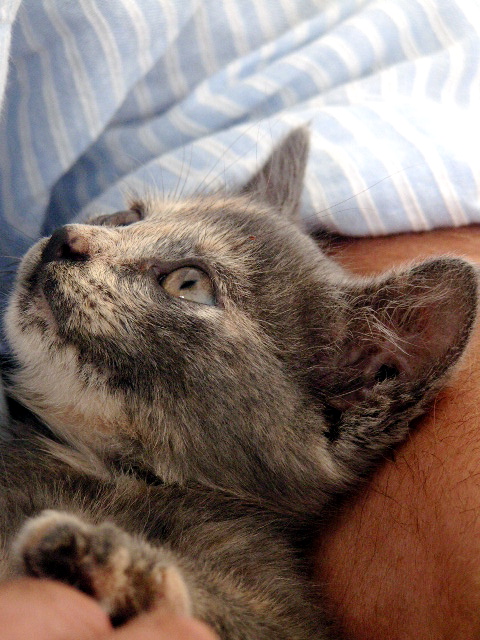 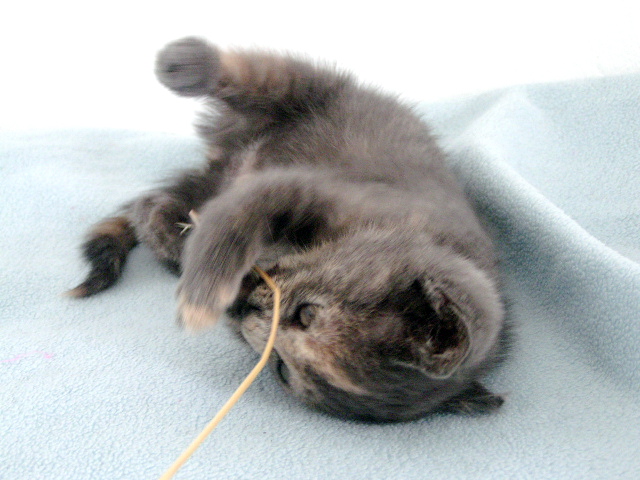 Here she is having a rightfully carefree kitten moment again - fiercely tackling and killing a straw :-) She had the most sad, abandoned and painful look on her face when we first looked at her, but now - a few days later, I think she has gotten the hang of that she will be loved to bits.
It's a blessing that we can handle her but from my (maybe limited) experience, feral kittens won't let you anywhere nearby. This leaves us with a rather obscure feeling as to how she ended up in the water tank in the first place. No other houses nearby where she could have come from.
Anyway... I'm thrilled this girl has such strong lungs. I simply cannot bear to think of her fate otherwise. She's taugth me a lesson about not letting my fear hold me back (I dreaded to find a kitten in that water tank) - and to not be indecisive when you're dealing with someone in urgent need of help (I feared hurting her when grabbing her tiny neck). In a very brief moment I actaully felt that my indecisiveness could've cost her life, which was enough to cause a clear cut decision.

Marg said…
Goodness, what a great story. That was totally smart to get a recording of a Mom calling her kittens. I kept Mewmew here when she arrived as a tiny little kitten. But I meowed at her myself. We had many conversations and that is why her name is Mewmew. I talked cat talk for many many days. We are so glad you found Emma. I would like to know where some of the cats that live here came from. Two of them are very tame.
Great story.
May 25, 2011 at 12:23 AM

Catherine said…
Such a sweet kitty ~ i'm so happy everything is worked out. This sweet girl is going to get lots of love I think. I am sure all the nastiness she went through is clean out of her mind now. Only good thoughts allowed in.

sunshine said…
What an amazing story but with an even more amazing reward! I am so happy to hear about the new addition, Emma is precious!

I have lots of news about my side of the world. We are officially feeding two cats every day, plus another that shows every now and then. Well, last week we found out each of the older cats have 3 sets of kittens that now play in our back yard. Like you said approaching feral kittens is even harder.

The 2 "official cat" I believe one is the mommy and the other an older kitten (BTK is the name of the mother and Little One is the other one!)... they get pretty close to me at this point but I still can't touch them, making progress though!
May 25, 2011 at 5:20 PM

ANGEL ABBYGRACE said…
Thank you for visiting us today. We are so pleased to meet you and wow what an introduction dear baby Emma. We are so glad that you have such good lungs. Are you in Denmark? Curious, because my Mom is have 1/2 Danish.
We are going to read through your blog to get to know you better!

K. said…
Congratulations Joan! for your skill to attract to the kitten. I not long ago gave to 2 surviving kittens of a litter of 5, I was very happy! For 1 month I am working and had less time, but I feel very happy on having read your posts! Kisses, Karin
May 28, 2011 at 4:59 AM

Luzia said…
Oh my, what a heartbreaking story of this little kitten! An what a great idea with a mothers voice from youtube!!! Emma is such a nice kitten and I hope she will have a wonderful life. A lot of hugs and kisses from Luzia.
June 5, 2011 at 12:24 PM

Crafting Queen said…
Thank God there are good people like you to look after these lost little creatures. She is adorable!
June 9, 2011 at 2:33 PM