A teddy bear in waiting 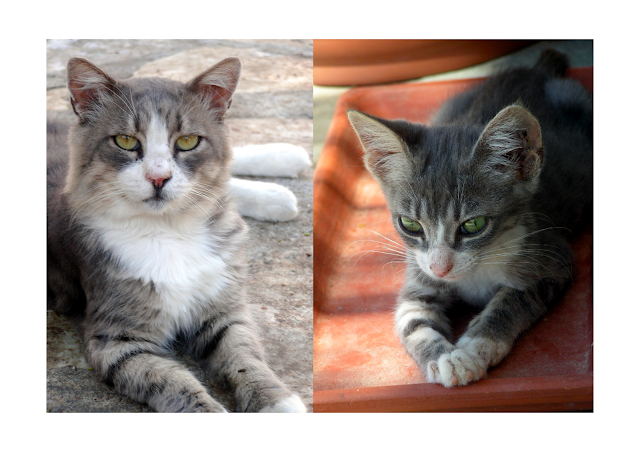 It's a known fact that Rosie and Rufus' mother is black - I've seen Rufus moving closely with her. But it's often a much greater mystery as to who's the father to kittens. I therefore had to bring my camera around to the park where I found Rosie and Rufus as I one day saw this gorgeous teddy bear (you just want to snuggle with him). It seems he is among the more lucky of town cats as it appears that he is well fed and in a rather fine condition - everything taken into consideration. He is calm, friendly and has that element where you just want to bring him home - just a real presence. As you can see I had a sweet reason for wanting to capture a few images - no one (and there are MANY cats in that park) looks anything like him and when it comes to the question of who has fathered Rosie and Rufus (well Rosie in particular) there can be no question!! Even where the white and grey meet on the paws - the curves, coloring and lines are all the same. Well Rosie started out real calm in life but has now realized that there is such a thing as feeling super charged and full of energy and she is turning out to be a real little kung fu master. Rufus is willing but even he is ocassionally a bit overwhelmed by his sisters new found super powers! Rosie has tripled her weight in 5 weeks and still going - she loves food. Rufus has settled well and loves cuddles - and loves that meals gets served with frequent intervals throughout the day! They both love the company of all their new brothers and sisters and all of them can often be found snuggling tighly together when it's time for naps. There's something so sweet about how these rescue cats accept each other - maybe something in them knows they share a similar destiny?
Anyhow... maybe Rosie will level out at some point and become a calm presence as her father but for now it's just terrific seeing this girl charging around!

Johanna Gehrlein said…
Hello Joan,
what a delight to see those pictures. Daddy Teddbear is really an impressive cat. I am sure he loves cuddeling, but only with HIS persons. You are right, he looks well cared and fed. And just this calmness proves that opinion. What a joy to see the little daughter, hopefully she gets his wonderful fur, too. She looks so exactly like her father. If I would life in your isle, I would come to cuddle the littles ones. Nice imagination.
Best greetings and God bless you, Johanna
August 29, 2011 at 11:56 AM

Deb said…
The daddy reminds me of our Hugo. Very calm & teddy-bear like. He is just spectacular. I'm so happy to see that he looks well taken care of. She sure has grown and is so adorable. Sweet photos.
August 29, 2011 at 1:48 PM

Anna E said…
Bingo!!! You found the father, that´s for sure. Even I can see the similarity in colour and pattern. And - no wonder about the nature of Rosie, I mean look at those GREEN eyes, don´t they call for "trouble"? ;-)
Hmm, wonder if the saying that "dogs are like their owner" goes for cats as well..?? Just pussled me, since it seems many of your furry friends are kung fu or ninja-like! ;-DDD
August 29, 2011 at 2:40 PM

Sadee Schilling said…
This is just amazing that you found the cat who fathered your little kitten--they do look so much alike! I love cats--I think it started when I was in kindergarten and my beloved teacher always told us that at midnight she turned INTO a cat! Ha!

Thank you so much for your kind comment on my blog this weekend--you're right, beautiful things do come out of struggles. But sometimes it's hard to keep sight of that when you're right in the middle of the struggling, you know?! That's why I'm especially grateful for the encouragement. I hope your adjustment to your new home continues to go well too! :)
August 29, 2011 at 4:08 PM

Marg said…
Oh yes that is Rosie's daddy. Good for you to find her Daddy. Did you tell her??
I have to tell you this cause you will understand. I caught Maggie at a house where she stayed in a hole under the house. This Morning I went back over there and haven't been there since last Thurs. when I caught Maggie. Well there was a little wild kitten there. Darn it all. I was worried that she might have kittens since she stayed under there. I have been a wreck all day. No wonder Maggie has been meowing all the time. Now she is even sick and we are going back to the vet in the morning. And I went over and fed the kittens. There are now two. At least they are eating but it is going to take forever to catch them. Thanks for listening.
August 29, 2011 at 11:31 PM

ANGEL ABBYGRACE said…
Oh he is just so handsome!I know Rosie is going to take after her Daddy's good looks and we are so happy to see that cute little tummy on that girl!
purrs
>^,,^<
♥Abby♥Boo♥Ping♥Jinx♥Grace♥
August 30, 2011 at 12:57 AM

Marg said…
Thanks for writing back to me. I have been so upset about all this. But the kittens look to be about 4 or 5 weeks old and they are eating. I took some canned kitten food over to them and they scarfed it up. Now I am worried about their mother who is in my bathroom and has slowed way down on her eating. I don't know if she has an infection from the spaying or just is frantic about where her kittens are. Poor thing. So I am taking her to the vet in the morning. Now I have no idea how they are going to look at her since she will not let me touch her. Thanks Joan. I have been so upset all day about this. But I am encouraged that the kittens are eating so now I have to go back over there 3 times a day. Thanks a bunch.
August 30, 2011 at 2:21 AM

Cat and DOG Chat With Caren said…
It's Daddy!!!! There is no doubt AT ALL that that is Daddy!

What great research you did on Rosie's Cat-Daddy! He is beautiful, but Rosie's eyes are still prettier. Funny if you can observe those traits how they get copied. So good to read she's as playful as they can get. Making up for lost time and opportunities.
Love to you,

Cornelia said…
Wonderful morning because of your lovely post. You surely are in the vital bussines of bringing happiness to cats, catlovers and all of us alike:-). Heartfelt presence the lucky, charming, furry dad and Rosie have!!! Yes and who would have seen and enjoyed them if not for your watchful, caring and loving way of being?
August 30, 2011 at 9:15 AM

Catherine said…
I just love this update! How wonderful to see and hear about these little kitties. It just fills the heart with happiness to know that these little ones got a second chance at life. Love it!
And how handsome is daddy cat! Very pretty!
Please give the kittens a little kiss for me!
xo Catherine
August 31, 2011 at 4:36 AM

GardenOfDaisies said…
I'm sooo glad that you found Rosie and Rufus and are giving them a chance at life!
August 31, 2011 at 6:01 AM

Julia Williams said…
Oh they look so much alike!!! It looks like Rosie can still use more meat on her precious little bones, but she has come so far!!
September 4, 2011 at 12:32 AM

How lovely to see the photographs of the adorable cats. That is good detective work on your part working out the family tree.