A sad but valuable lesson 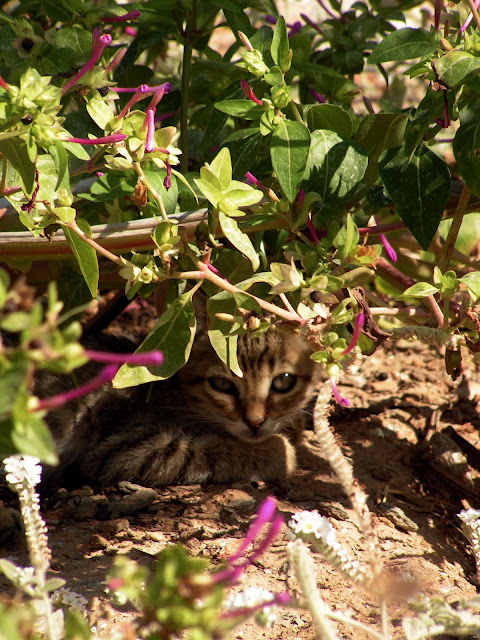 About a week ago we got a special delivery just outside our window. Three hungry kittens! It was our number-one-neutering-escape-artist Pepper who  endowed us with the "tabby gifts." No longer any beating around the bushes - just plainly delivering her off-spring - now old enough to eat proper food. Alongside this delivery came her long-time mate Bruce The Bruiser - a REAL alpha male who lets nothing and no one get in his way. The very same male that has also fathered Tiny and Ninja - and later Twinkle (a single survivor of a litter). He has also been an elusive cat to catch - so this time around I thought to try and get near him with the hope I'd eventually be able to catch him by the scruff of the neck (I'm surprisingly fearless when it comes to matters like that). This last week I've been able to stroke him on a few occassions when feeding him - obvisouly not without some foul hissing designed to let me know who's the boss. But I managed it and after that he became noticeably more at ease - not needing to flee every time he saw me. 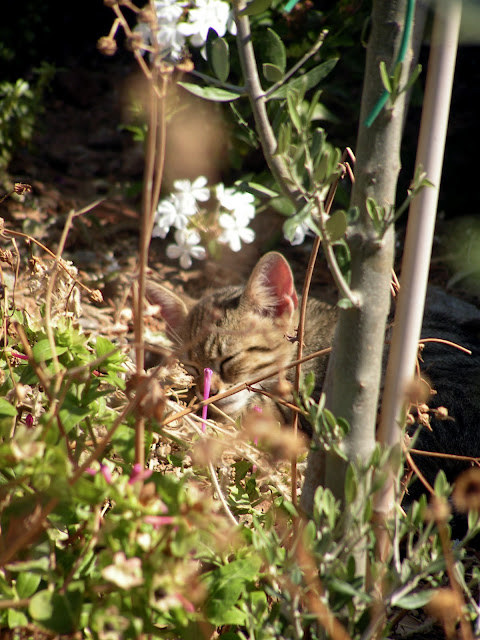 Anyhow, yesterday (exactly a week later) another young kitty mom suddenly appeared in the front garden (where I feed the adult cats - and Peppers new kittens). Never seen her before but there was no doubt what she came for. She cried out loud for food and was obviously hungry AND so was her three gorgeous little kittens - two more brown tabbys and one (swoon) little ginger tabby. When I did my late night check to see if there was peace and quiet all around I was deligthed to find the three new kittens huddled up in a padded box I'd provided for them. 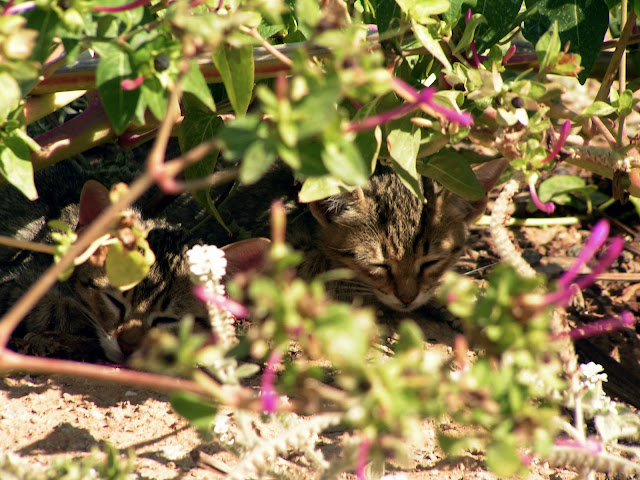 I was even more delighted this morning to find they were still there. Kitty mom had left - probably now in the pursuit of a life of peace and quiet for herself. All cats - big and small alike - were fed their breakfast. Just before my husband and I set out on the early morning run to feed some local strays I even enjoyed the newcomers happily preening themselves in the morning sun - such a delightful scenery. I marvelled at gingers gorgeous glow in the yellow morning sun.
Well, that was the last taste of delight this particular morning. We dashed out and were back 10 minuttes later. To find Bruce The Bruiser victoriously sniffing the still body of ginger kitten. I just simply could not believe the horror in front of my eyes. Ginger had savagely been slashed around and killed.
Suddenly the sting of my ignorance began to burn. Something I know so well and yet had been so stupidly ignorant as to miss out on. An alpha male will likely kill off-spring that is not his own! Never had I imagined that I would actually witness any such thing. This was like a scene out of a documentary about wild lions. Truly vicious... and with no other purpose than to eradicate off-spring that was not his own. I suddenly got busy shooing him as far off as I could. There are still two kittens that are not his and they need to be protected. Now there's no other option than to arm myself with patience and to try and trap him as quickly as possible. This time around I have a very strong reason for wanting to catch him.
Above it's images of the two remaining kittens - Honey in the first image and Olive in the second. Later the two of them snuggled together in the shade.

Update!!! Tom cat has now been trapped and has been handed in for neutering. Now we hope for peace of mind and safety for the new kittens.

MarkD60 said…
That's terrible! I was filled with apprehension after reading the title, and tensely reading, waiting for the bad news and it is worse than I expected.
I'd try to snag that alpha male and give him the snip.
He fails to realize YOU'RE the real alpha, and once kittens are delivered to you, they're yours, not his.
Sorry you had to go through this.
October 3, 2011 at 2:46 PM

sunshine said…
Yes, indeed a very sad lesson and a most valuable one. I feel so sorry for the little kitten and you are right, the only way to prevent this (an more kittens) from happening again is to get him fixed.
Again, sorry for your loss, I feel it, just like you, even if I'm miles away.
October 3, 2011 at 3:05 PM

Anna E said…
Gosh what a horror story - so sorry to hear this!! I had heard from someone, who has 8 cats (and who experienced something similar) that his male cat killed a kitten of his own litter in order for the female cat to be ready for pregnancy quickly again. But I didn´t know it could happen with another´s kitten, it makes no sense at all..
It surely seems like the "rumer" is spreading amongst the cats in the area, that there is a cat-sanctuary nearby. Otherwise how would the new kittenmom know about it?? :-)
October 3, 2011 at 3:22 PM

Johanna Gehrlein said…
Dear Joan,
what a horrible experience. I guess, that those cats live wild like lions. They experience starvation from childhood onb and therefore they defend violent their territory. So they fell back in their violent animal instincts. That is not comparible with the playful life of our wellfed cats. They relieve somehow in their childhood. So to neutrum him is the only way to get him peaceful. Don't you get traps for cats to catch them lifely. He will attac you if you get him in the back.
Best greetings, Johanna
October 3, 2011 at 4:14 PM

Marg said…
I know just how you feel. I have never had that happen that I know of before. It must have been horrible for you. After I found Maggie's three kittens and then found two of them dead the next day, it was horrible Thank heavens I got a hold of Mahoney who is just adorable. Get that darn Tom cat trapped and fix him. So sorry this happened to you. Very sad.
October 3, 2011 at 4:28 PM

What a very sad experience! Wild life is really harsh at times... But what a fate for such a tiny ginger kitten for getting killed that way. Hope you will be able to trap him and put some peace back into 'feline land'.
Love to you,

Cornelia said…
What a loss - it is really sad. I did not know that killing of a kitten by a male cat could happen. It must have been very sad to see the little ginger kitten lifeless. Cats are wild animals with instincts feline. I thank God that Honey and Olive are alive. I am very happy for their life being in the most wonderful loving and caring human hands - with you. Sending you lots of love and my human support.
October 3, 2011 at 8:05 PM

Cat and DOG Chat With Caren said…
Oh Joan I am so sorry! Don't beat yourself! I wouldn't have thought of that either...I feel so bad for the kitten and of course for YOU...

I am glad you caught that Bruiser, we do have to remember though that he was acting out of instinct. It is awful, deplorable, but that is what they do. xoxoxoxo
October 3, 2011 at 8:26 PM

ANGEL ABBYGRACE said…
Oh Joan I am so sadden by this. It is nature's way and it is brutal but it is also so heart wrenching. I am soooooo glad that you caught the unneutered male and now he will be happier and so will all the other kitties in the neighborhood. Thank you for all that you do for these beautiful babies.
purrs
>^,,^<
♥Abby♥Boo♥Ping♥Jinx♥Grace♥
October 4, 2011 at 12:06 AM

Modern Country Lady said…
O dear, what a sad sad story... I love ginger cats.... but have to admit never had much luck with them, always some tragedy would carry them off prematurely- I think you are probably right- about the non- dad killing the kitten....neutering hopefully will help..so sorry Joan !!
October 4, 2011 at 12:39 AM

~Kim at Golden Pines~ said…
Like you, I'm so sad for the loss of the precious little one, but know as well as you that nature can sometimes be so cruel....I'm glad 'the Bruiser' was captured! You continue to have my admiration and thanks for all that you do for the cats in your corner of the world--You remind me with each of your posts why cats were always my 'first love!!'
October 4, 2011 at 2:51 AM

Anonymous said…
How sad!! I'm sure coming upon that scene just gripped your heart so hard. I'm happy to hear you were able to capture him. You do such wonderful work!!
October 4, 2011 at 4:03 AM

Reena said…
So glad you captured him! But so sad for the little one he killed. Your photos are so precious.
October 4, 2011 at 2:05 PM

505whimsygirl said…
The title prepared me for something bad. I'm sorry that Bruiser was captured and snipped. I hope his drive for being alpha eases up a bit.

You do such great work. I know animal lovers around the world appreciate what you do!
October 4, 2011 at 7:13 PM

Catherine said…
I'm so sorry about the little ginger kitten but very thankful you caught the male cat. Hopefully getting him fixed will help save the other kittens along with him not producing more!!

Anonymous said…
It's a hard reality but it is the way it is, and nature had its reasons for making things this way.

Julia Williams said…
That is so sad. I know I would have cried buckets. I am glad the male has been caught for the snippety snip.
October 12, 2011 at 2:24 AM

Cornelia said…
Hope the kittens are well now and hope the Bruiser-cat is well too after neutering. How is your wonderful cat-family doing? Missing you and your special stories from the real life..
Lots of love to you and them...
October 14, 2011 at 11:02 AM

What a sad story and must have been so upsetting for you. So glad that the two other kittens are safe and that Bruiser cat has been neutered.
You are a real Angel and do such wonderful work.

Lorraine Young Pottery said…
I hope you can find good homes for them! Yes so many homeless cats in need of love.

HUGS and thank you for trying and loving and putting a stop to more kittens, as sweet as they are, there are just too many. 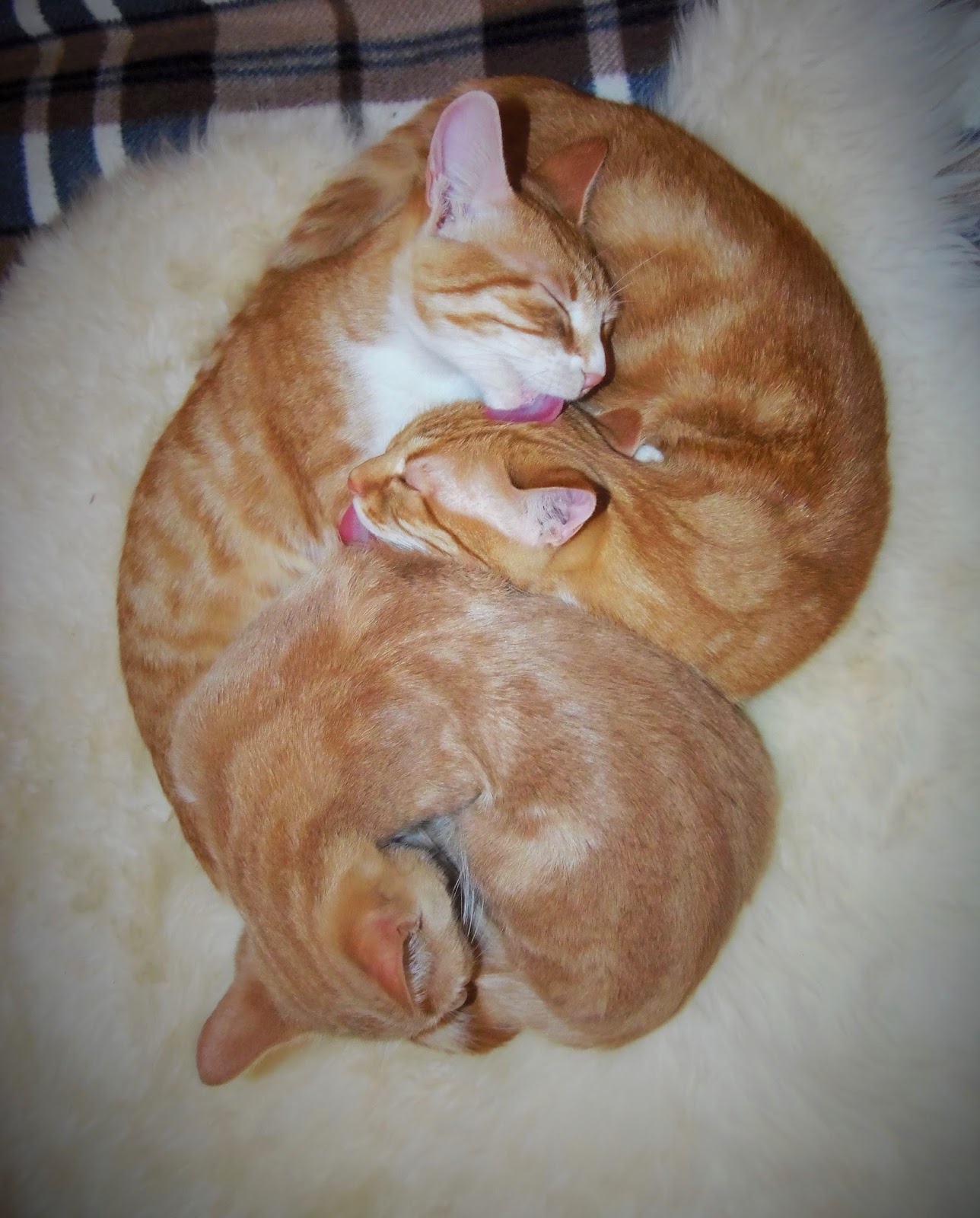