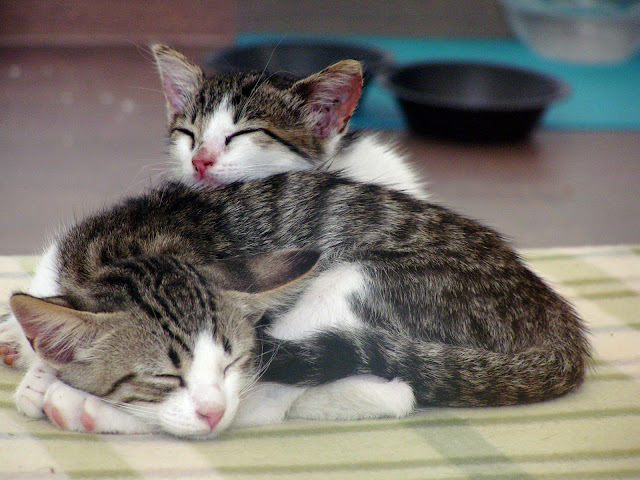 I'm way behind with the rescue stories - things are very busy here and cats lovers of this island have just finished the second round of cat neutering which again was a great success. More about that in some later post.
Anyhow... I found this adorable couple freshly (it seemed) dumped at the side of the road almost 6 weeks ago. I spotted them because the little one was running out in the middle of the road and I knew I had to stop if this one was to be prevented from being run over. Well, turned out there was another slightly bigger kitten just in the side of road hiding in a bush. The little one was 6 weeks and the bigger one 10 weeks. Luckily I happened to have a cage in the car and I instantly scooped them up - no way could I leave them behind. As I drove away I discovered a car hidden behind a bush and a couple standing behind the car looking towards me. I felt convinced they'd just dumped the kittens there. The were so easy to handle and were quite plump, for sure they'd been well fed - maybe so they'd survive longer trying to fend for themselves?? Maybe casulties of the Greek crisis, which have hit Greek people hard. 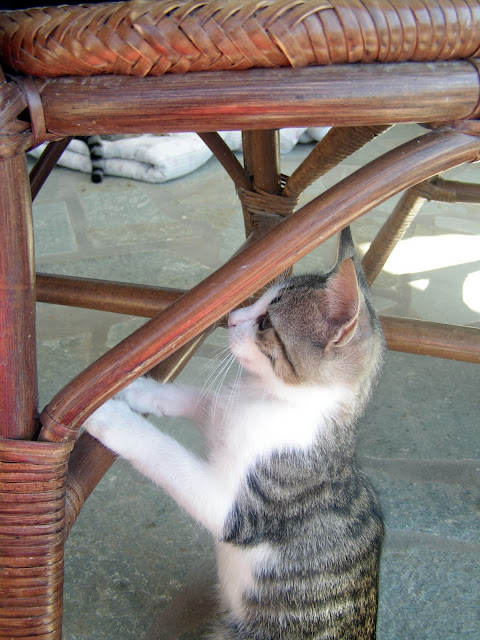 Maxi interacting with his new mates
No matter what, these boys were a bit of a mystery to me. They clung to each other like brothers and they look like brothers - but no way can they actually be brothers. The little one is for sure at least 4 weeks younger. At first I named them Mini and Maxi (yes, how imaginative is that, lol!). Poor Maxi (bigger boy) - only a tiny kitten himself and yet he had to act as the bigger brother and look after and nurture his little "brother".  It was of course very sweet and tender to see them together but it was also obvious that Maxi had a need to be with kittens his own size. Mini was actually a bit too little to play with (kittens under the age of 6 weeks shouldn't interact with bigger cats) and it was obvious that it did get just a little too rough for Mini sometimes. But luckily... after a week in confinement they were introduced to the rest of their new slightly bigger kitten mates and they blended in just beautifully (they are so well behaved). This meant Maxi suddenly had new friends his own age and it was obvious a load was taken off his tiny furry shoulders. 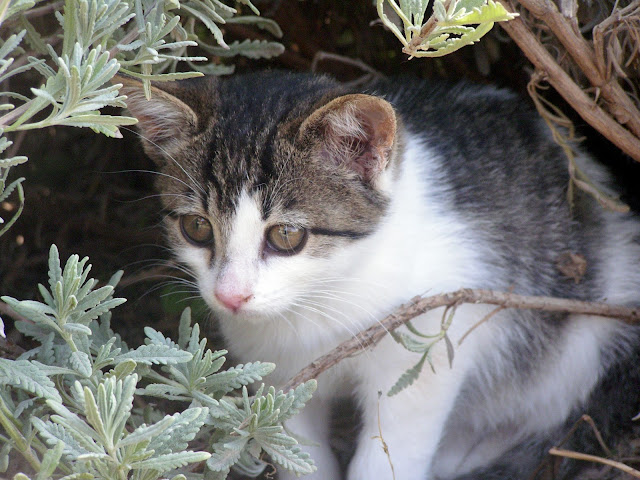 Toddy (Mini) watching the wild games safely tucked under a lavender bush
Whilst Maxi was having a hoot, Mini (because of such a great character has since been renamed Toddy) spent a week hiding under the cupboards. All the wild games was a bit too overwhelming but then he became bolder and has since caught up with the bigger guys, no longer intimidated by their size. Last Saturday Toddy was introduced as a playmate to Ellie. She was only 5 weeks old and needed a gentle mate. Toddy was such a perfect match - he is tender and not actually that interested in fierce combat. 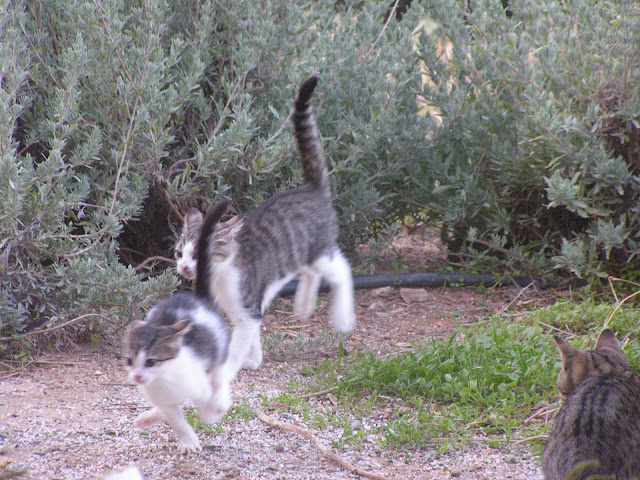 The delights of playing in a safe environment - and a curious little onlooker!
It was alo such a delight introducing these two boys to the garden. It's a little haven where they can safely romp and play hide and seek. You can imagine the magic when you have a garden full of kittens of various sizes all playing hide and seek together. The pay off for rescuing these precious little souls is immeasurable.
On a different note I've got some great and exciting news I want to share with you all so do be sure to pop by in a few days time!

Anna E said…
Thanks for sharing these wonderful images and glorious little stories of rescues. It´s kind of getting "harder" for me to remember /stay updated with who is who of all these wonderful kittens, without looking back into former posts. So - it would be a magical help to actually have a book with images and stories of the whole tribe! - perhaps a future project? :-)) Lots of support and admiration. And looking forward to the exciting news! <3
November 13, 2011 at 8:01 PM

What a Mini/Maxi story...! Who knows if they were brothers or not? I wish animals could talk to tell their own story. But what a fate and it looked suspicious indeed with that car and the couple hidden in the bushes... How CAN they put such defensless babies out on the street?!
And life cannot be that tough for not finding enough to feed some felines. That is only an excuse.
But you opened you big heart wide again and gave life to those cute boys. That last photo is also precious where they are running around and being happy. Being a playful kitten without any worries. May God bless you for your kindness!
Love to you,

Cornelia said…
Simply it is beyond wonderful to get so many great news all in one. Reading your post is the culmination of a magic day -really. First one's heart gets deligted at the sight and story of the two brothers - what a rescue situation so glad that you were there as you are there when it matters most. Then how great must it be to be in your paradisical garden with all the playing going on and hide and seek and surely much more and then the second neutering having been possible. And a promise of more great news.. You can surely play some very joyful tunes on the four strings of one's heart. All the Gods Little People in the world will wish to
be there with you..
November 13, 2011 at 8:31 PM

Johanna Gehrlein said…
Dear Joan,
your photos of lucky kitties made me smile a lot. It is a blessing that you care for them. In my next life I want to be a kitty in your home.
Hugs, Johanna
November 13, 2011 at 8:34 PM

Deb said…
I would share my own food before putting them on the street. Again, how fortunate that you spotted them. They are just adorable. Thank you again Joan for being such a kind heart to cats. Hugs, Deb
November 13, 2011 at 9:11 PM

Cat and DOG Chat With Caren said…
they are just precious together! I actually liked their previous names, "Mini and Maxi"...so cute!
Can't wait to hear your news...If I am not around please be sure I know about your post!
November 14, 2011 at 4:36 AM

Catherine said…
I just can not understand people 'dumping' animals. I don't get it. I guess it's something we will just never understand.

But talk about being in the right place at the right time for you to rescue these two little cherubs!

I think your garden must be a little slice of heaven my friend.

Marg said…
Oh Joan, those two are so darn cute. You are just like me, a cat magnet. Sounds like you have a garden full of cats. Isn't it great when they all get along really well. Can't wait to hear your exciting news. Big hugs to all those cute kittens.
November 14, 2011 at 1:21 PM

505whimsygirl said…
Adorable little kitties. I wish I could hop on over to Greece and help. And how convenient, having a carrier in the car!!! ;-)

ANGEL ABBYGRACE said…
Oh my heart melted when I saw Mini/Maxi! They are so adorable and so lucky. We cannot wait to hear your good news!!

~Kim at Golden Pines~ said…
Add me to the list of those when a melted heart at your new additions!! I am always so humbled when I read one of your posts about how these cats just seem to find you when you are needed most. It truly shows that you are being led by 'something unseen' and you are connected to them, and they know it!!
November 15, 2011 at 7:47 PM

RoySr said…
What a wonderful read. I thoroughly enjoyed to stop here. I'm afraid I'm slow in getting around to everyone that has posted at our place or has been reading and chose to follow us.

We've been AWOL for a mite, but we are back, and we will be back HERE I assure you. Love what I read here, and given time I will catch up with the past.

Hope you and the little ones have a great rest of the week, and all stays well with everyone, large and small.

This from Lisa and Roy (Small one and Large One), and the 5 Mouskateers of Five Oaks Manor, SouthWoodsUSA (Buddy Bear, Ms Princess, Tegar, Ms Smokey, Rowdy and of course MikiCato himself.