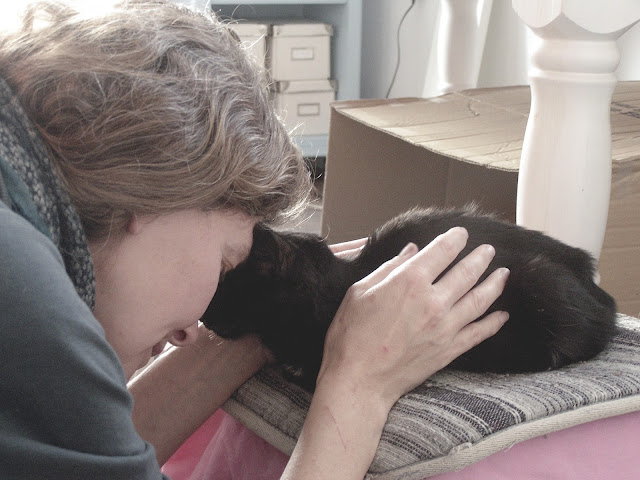 As some of you will know already, Charlie sadly passed away on what I call Christmas morning (December 24th - the day Christmas is celebrated in Scandinavia). In spite of his multiple ailments it seemed that he initially made some good progress. Began to eat of his own volition (initially he had to be force fed due to painful ulcers on his tongue), did his toilet, purred and even sought our laps for cuddles and intimacy (he was a feral cat!) - and he seemed very present in his eyes. I knew though that it wasn't good with Charlie. He had many possible diagnoses - flu, clamydia, leukemia and feline aids. Two days after bringing him home he stopped eating again. His eyes went glazed and I could see he was suffering. I had told him that I would do all I could to help him - but I also told him that if he was in too much pain that it was ok to leave his little fur coat. DH and I did all we humanly could to encourage Charlie. We tried to make him as comfortable as possible and delighted in having him purring in our laps. In this image I am having a quiet moment with Charlie - brow to brow and he was purring.
Unfortunately Charlie's suffering was to such an extent that he was beyond bodily repair.  When we brought him back to the vet he was examined by another vet who gave the diagnosis: diaphragmatic hernia (caused by being hit by a car, falling from a high place or being kicked - and making breathing extremely difficult). Or just simply a very bad virus. We agreed to try intravenous antibiotics and fluids in the hope he could recover again, but it turned out that it most proabably was the vets first diagnosis  This poor boy had suffered terribly - most likely with internal injuries plus a flu and the ulcers on his tongue. As you can imagine - I so badly wanted him to recover to experience a good life. If any cat deserved to experience it it would have been Charlie. I rest reassured that Chalie knew during the last days of his life that he was loved and cared for. He was seen. He did not go unnoted. He was a beautiful soul. One of God's little people.

The Cat Guy said…
My heart hurts for Charlie and you. Glad to know he is now free of pain and that he tasted the delight of your heart. I love the he was seen and that he knew he was loved and cared for. Thank you so much for tending to him.

Daisy said…
So sorry that Charlie had to go to the Rainbow Bridge, but glad that he is no longer in pain. Rest in peace, Charlie.
December 26, 2011 at 6:28 PM

What a sad Scandinavian Christmas morning for you because of Charlie. But as you already stated, he was fortunate for having known TRUE human LOVE in his last days. You could not heal the hurt that other humans had done to him; you tried hard enough and Charlie knew it by purring to you, regardless his pain and sorrows. Let's hope and pray that one day humans will start respecting all the critters around them and treat them with dignity...
Love and Peace to you dear friend!

Marg said…
Yup Charlie knew he was loved and so it was all right for him to leave. I am sure you did the right thing. Like I said before, I am so glad you found him and gave him some days of comfort. You tried your best and that is all you can do. Take care and give all the rest of those kitties a big hug for us. Take care.
December 26, 2011 at 6:46 PM

Jules said…
I am so sorry to learn of Charlie's passing and on Christmas of all days. I lost a cat a few years ago on Christmas night and it devastated me. I hate to see animals suffer and I hope Charlie didn't suffer too much in the end. He was one lucky cat to find you to give him some love and care in his final days. God Bless You!!
December 26, 2011 at 8:06 PM

Julia Williams said…
I am so sorry that Charlie had to go, but I also think it would have been far more tragic had he not known such great love and kindness on his last few days. Rest in peace sweet Charlie.
December 26, 2011 at 8:07 PM

505whimsygirl said…
I am sorry to hear about Charlie. It is amazing, though, that a feral cat found so much love and comfort with you and DH that he would seek out your laps and purr. Yes, he was very loved and responded in kind.
December 26, 2011 at 9:19 PM

Viola said…
I'm so sorry to hear about Charlie! :/ But now I just hope he plays in great heaven woods full of peace..

~Kim at Golden Pines~ said…
Thank-you again for letting me know about Charlie. We lit our candle for him last evening and said a prayer for him and added one of thanks for your being there, not just for him, but for the others too.
December 26, 2011 at 11:41 PM

Becca said…
I am in tears! That photograph says it all. It is very obvious that you did all you could do and I KNOW Charlie was doing his best to hang on. I am sure he felt loved and now no more suffering. It makes me so happy that you help these little souls.
December 26, 2011 at 11:41 PM

Cat and DOG Chat With Caren said…
oh dear, my heart aches, my stomach aches...I am typing through tears. If MY heart is broken I can only imagine how you must feel.

God DID look out for Charlie, he sent him to YOU to spend his final days...I am so deeply, deeply sorry

tiptoethruphylsgarden.blogspot.com said…
I`m so sorry about Charlie.He knew he was loved & so lucky to have you to be with in his last days.It is so hard to let go,saying a prayer for you,you have such a big,caring heart,may God bless you,phyllis
December 27, 2011 at 2:47 AM

Crafting Queen said…
So sorry that Charlie passed away but at least you were able to show him kindness in his last days. Lots of hugs.
December 27, 2011 at 10:17 AM

Anna E said…
Poor Charlie - and poor you...But his life was not in vain. You gave him all you possibly could, and he gave you trust and purrs and intimacy in return. He crossed your path for a reason. And now you have both crossed mine. What a special moment between you on the picture. Condolences for Charlie...
December 27, 2011 at 12:24 PM

sunshine said…
"Happy travels into Heaven Charlie", I am sure your soul is being nourished in a special way by God, who called you to his side.

Joan, so sorry to hear about the loss of Charlie, but happy to hear you gave him the best moments of his life and the most wonderful farewell.

ANGEL ABBYGRACE said…
It tears a piece of my soul to think that Charlie was harmed and that he suffered so until you showed him the graces of angels. I find comfort in knowing he knew that he was loved and he passed with the thoughts that not all humans are heartless, that there is goodness, and that he was loved all around the world.
Fly free little spirit.
Fly away and rejoice.
purrs
>^,,^<
♥Abby♥Boo♥Ping♥Jinx♥Grace♥
December 27, 2011 at 6:43 PM

Johanna Gehrlein said…
Dear Joan,
I am sure it was easy for Charlie to leave that world after he has felt your love. When it comes true what we all thing, that we leave our life for another different being without sorrow and pain, then it is o.k. that Charlie left us. I am sure he will wait for you and all the friends until the time is coming. God will pet him now.
Hugs and love from Johanna
December 27, 2011 at 7:17 PM

Sandra said…
My heart goes out to you :(( So sorry Charlie couldn't hold on any more but he will never be forgotten and what's most important, he tasted real love. I only hope the animals and us go to the same heaven.

Cornelia said…
The picture of Charlie and yourself radiates multiple qualities like a never before seen pulsating star nebulae in deep universe causing powerful light spiralling echos from the overflowing grace of sacred Godly union between all that matters that is. It is very much alive every little bit of a second of its pulse. Have never seen such a miraculous glow and afterglow, have never experienced such real beauty, it is unique real balm with instantaneous healing properties. To see it again and again is my highest wish. It causes me to seek new language. It causes me to wish to dance wildly free...and there is so much more to it all...
December 28, 2011 at 12:31 AM

Gebreidesjaals: Knitted Scarfs or Scarves said…
tears in my eyes when i just 1 second ago read this all.

Modern Country Lady said…
Losing a cat, any cat, but especially one you have cared for and loved and hoped for just breaks your heart- and I am so very sorry for you and your loss.What a lovely picture of you and Charlie.I am sure he is now looking down at you with love in his heart and is no longer suffering.
Big hug
Bea
December 30, 2011 at 2:30 PM