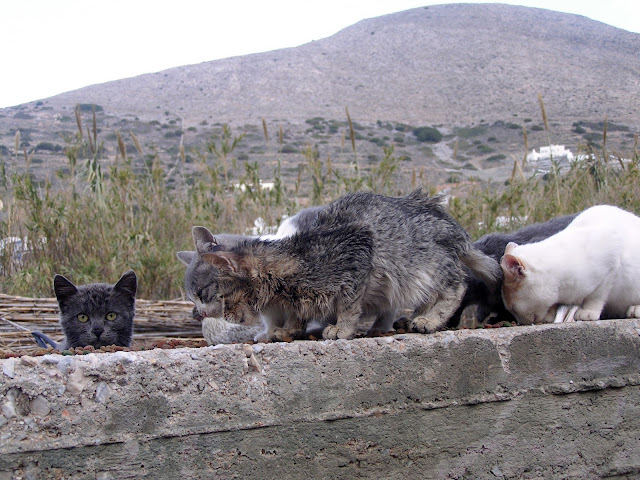 Well, hello world! It's been a while. Our internet has been down for more than 10 days and living on a small Greek island, that's like being cut off from the rest of the world.
Anyhow... the rescue stories continue and today I want to introduce you to some of my precious "dumpster friends." They are the less fortunate who all got born around a dumpster right by a road but who have taken up residence here because it's where they go in search for food. Also there's a field just on the other side of the wall (I'm standing on the road taking these photos) where people dump their garden rubbish. When enough straw, bamboo and dry stuff has accumulated the cats make little dens for sleep and shelter. Unfortunately - eventually, when the heap is real huge, the owner of the field comes to burn all the rubbish and the cats are back to square one (no one is interested in deliberately attracting the cats!). 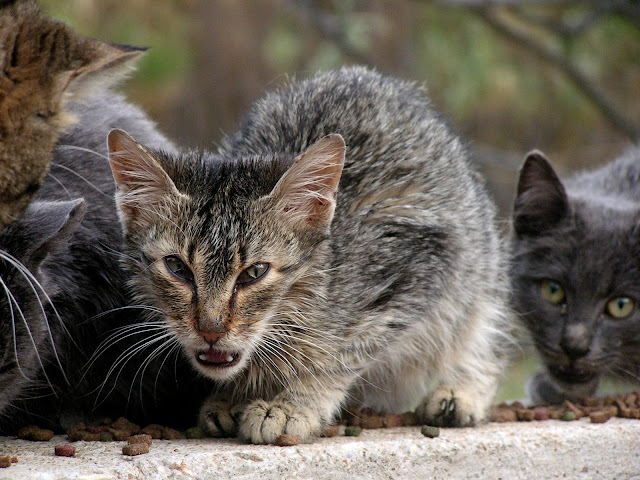 Recently four new bigger kittens (4-5 months) appeared here. This one above appeared a few weeks ago. He has got a very shy mother, which might be why she waited such a long time to bring him to the dumpster. He is very emaciated (and extremely feral) and it took him a few days to get the idea of food. He has still got a long while to go to reach his normal weight but at least he now gets 2 or 3 daily servings of food. 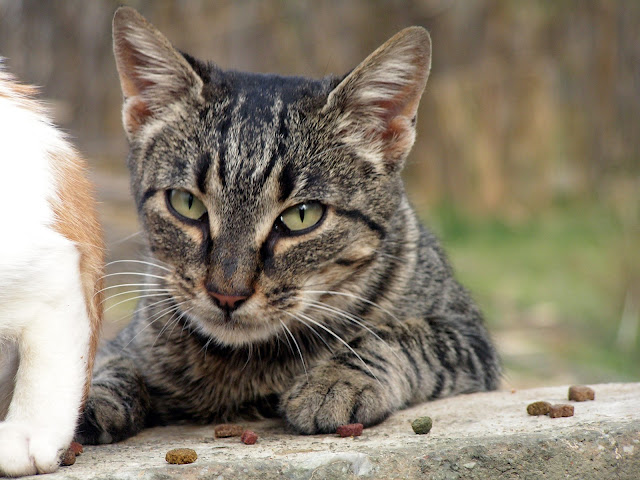 Some of the bigger cats have grown more resilient and shrewd - I'm sure they know which door-steps to appear on for food scraps. 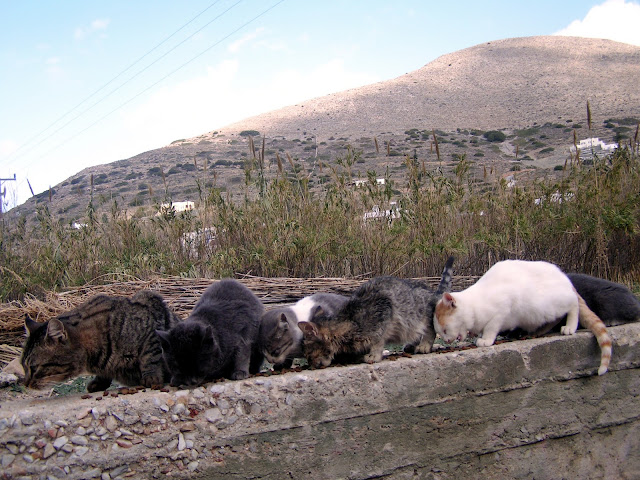 I love when we have nice weather (no rain and not too cold) - it means these guys doesn't suffer the cold too much, especially at night time. But in spite of a recent spell of seriously beautiful weather one of these little guys has developed a bad flu. Felix - the white/ginger cat/kitten has lost his appetite (the above image is from last week). Unfortunately it is not an altogether easy task catching a feral cat for veterinary treatment but later today I am going to try to catch him. 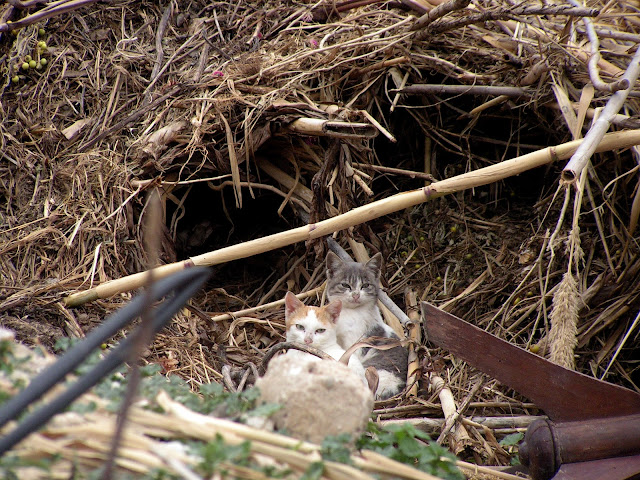 Here Felix is enjoying a warm afternoon last week with one of his little snuggle-mates (isn't she gorgeously scruffy?) I need this boy to be well and healthy - he is a special one - so I need you to cross your fingers that I'll be able to get him the help he needs.
I promise to keep you posted!

P.s. Update - Felix was caught (unbelievably a cat trapping expert happened to be there the moment I arrived - what do you think about that!!!?). He is now in r&r for a few days.

505whimsygirl said…
I'm glad that Felix was caught -- what great luck!!! Their dens look like they would protect them from the elements. I wish Mr. Farmer would allow them to stay during the cold spell.

Johanna Gehrlein said…
Hello Joan,
oh my, all those feral cats are looking anyway nice. They are so independent and I would wish them to get enough food for a health life. I hope all is going well with your furry friends. They are all so cute and would deserve the love of humans.
Best greetings, Johanna
December 7, 2011 at 6:12 PM

~Kim at Golden Pines~ said…
Another blogging friend in New Deli is trying to help some of the street dogs and she faces the same challenges that you do--Both of you have become an inspiration to me because of your dedication and kind, caring and compassionate hearts, and that you don't look away when so many others do.
December 7, 2011 at 7:35 PM

Unknown said…
Thank you for helping little Felix, what a stroke of luck that the trapping expert was around just when you needed one! I do love that picture of him and his delightfully scruffy gray friend!
December 7, 2011 at 9:05 PM

ANGEL ABBYGRACE said…
Joan
I am so glad you were able to get Felix trapped! Your pictures are gorgeous as always and we are purring for all of those babies.
purrs
>^,,^<
♥Abby♥Boo♥Ping♥Jinx♥Grace♥
December 8, 2011 at 12:39 AM

Catherine said…
Hooray for catching the kitty! It's just so sad that all these kitties do not have a warm and loving home. But knowing that you are watching over them makes their world a little bit better JoanI

What a sad sight to see those hungry emaciated feral cats... The kitten Felix was lucky for coming across you!
You asked if I'd received the cards, but not yet. Will let you know right away.
Lots of love to you and your kittens,

Anna E said…
Gosh - most of the pictures are so painful to look at! Especially nr. 2 with the big, graystriped kitten :-( It gives me the same feeling as when looking at pictures of starving children in Africa... I truly hope people keep buying your cards so you can afford more food and healthcare for the feral cats - they are in great need. Hoping for the best with Felix. How about his little "snuggle-mate", won´t she feel lonely now without him? Perhaps there is a room for her as well? ;-)
December 8, 2011 at 9:23 AM

Sandra said…
So glad you were able to catch Felix, I know what you were in for:lots of waiting, patience and luck. The kitten on the second picture looks so emaciated but I am sure he will be able to recuperate with now having food at disposal. Whenever I see a stray in a bad shape (or not) I get heartbroken and I do my best to help. These cute babies are sure lucky to have you on their side. I so wish there were more people like you!
December 8, 2011 at 1:44 PM

Deb said…
Good news about Felix. I gave a shout out for you Joan on my post today. I think of you always and the wonderful work you do. I send love to all those homeless kitties.
December 8, 2011 at 3:23 PM

Second, I'm getting so toutched by your story.. My heart aches for these lovely animals! They are so cute! I'm glad the world have kind persons like you! :)
December 8, 2011 at 7:02 PM

Cornelia said…
You surely know to make happy both humans and 'GodsLittlePeople'!
December 9, 2011 at 9:55 AM

Julia Williams said…
That is good news about Felix. I don't believe in coincidences, and I think the cat trapping expert was "sent" to help you by the universe. However it happened, it's great that he was caught and can hopefully get well.
December 10, 2011 at 10:06 PM