A unique chance of help for very feral girl 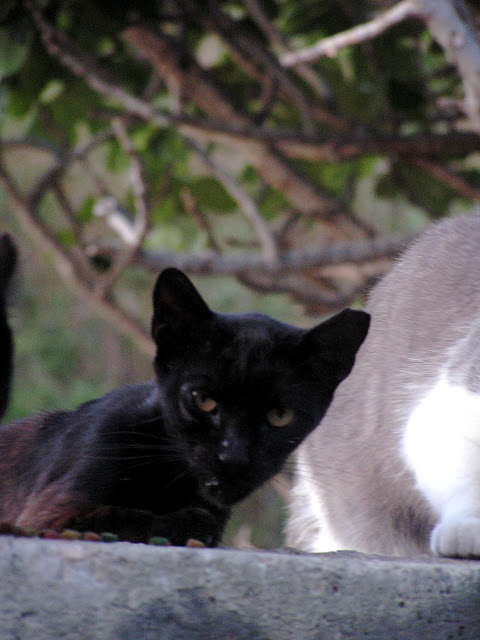 As promised, here's the story of one of the cats your wonderfully supportive donations and auction bids have helped me being able to offer help.  You can probably gather from these images that you are looking at a very feral cat - I had to use a zoom as she would otherwise be gone in an instant (hence the not so sharp images). 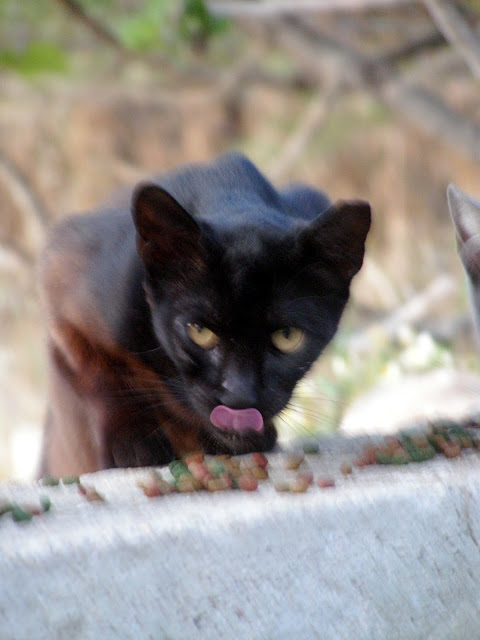 The two top images (and the bottom one) are all AFTER images, but last Sunday morning I found her in the very unfortunate situation of having gotten a very large and seriously prickly plant bit stuck deeply under her eyelid. I knew I had to get her to the vet but it soon became apparent that she had no itention of letting me in on her private affairs!! I tried leaving a trap which she causiously walked into - God knows how many times - only to slyly walk backwards out of the cage just before the trigger went off. I was dealing with a real pro escapist or should I just simply say - a real feral cat. I got another cat person involved and we patiently waited and waited... to no avail. Sunday, Monday, Tuesday passed and the eye did not look good.
Late Tuesday afternoon I asked my vet for advice and was told that she most probably would go blind with the thing stuck in her eye. But as it always is with this incredible vet, he jumped to the task and came on three different occassions outside working hours! to try help catch her. He eventually managed with a huge net and we were actually three people involved at this stage getting her safely into a crush-cage where she shortly afterwards could be sedated.  Then off to the practise where the spiky bugger was pulled ironically very easily from under her eyelid. In these two clinical images taken by the vet she is under full anesthesia. 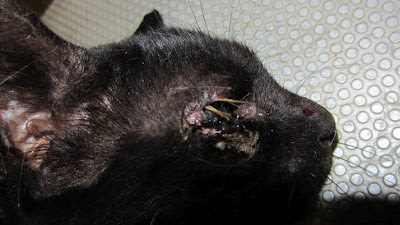 In this first image you can see the thing stuck under her eyelid... 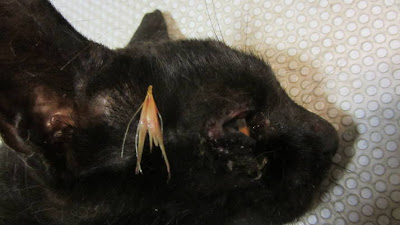 - and a great sense of relief of seing the nasty thing out of her eye at last! Upon examination it did show that she had an ulcer on her eye apart from all of the scratching herself to distraction (I'm sure).  She spent the night at the veterinary practise to see if they were able to treat her again with eyedrops for the ulcer the next day. It simply wasn't possible as she is so feral so I took her back and released her into her known surroundings again. 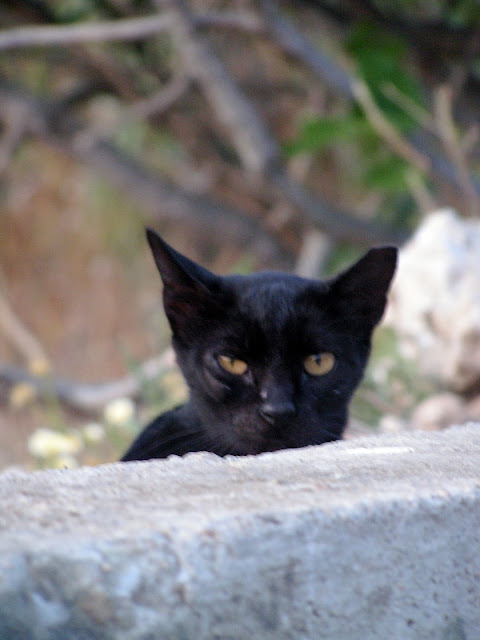 All the big images are from today where you can see her eye looks quite fine and the scratch wounds which she inflicted on herself have healed quite well too. If I hadn't noticed this girl I really don't know what would have happened to the state of her eye long term. This for sure was a very unique chance for such a feral girl.
For auction results please scroll down to last post.

Marg said…
Well thank heavens you found her and what a wonderful vet to help catch her. I know how it is to try to catch the feral cats. Glad she got some treatment. Take care
May 21, 2012 at 12:47 AM

Seville at Nerissa's Life said…
Oh, that poor little girl! Thank God you were able to get her the help she needed. There will be a very special place reserved for you up in Heaven, one day. What you do for these cats is amazing. Thank you.
May 21, 2012 at 3:19 AM

What a fate for that cat-girl. Just bad luck and more damage done because she got so desperate.
Great Vet you have for helping you out the way he did and does.
Love to all of you,

The Cat Guy said…
Thanks for being persistent! You certainly have a way of improving the lives of so many cats. Thanks for doing what you do!
May 21, 2012 at 7:18 AM

Sandra said…
Oh, so glad she is pain free again! Poor little girl. I am so so thankful to you for all that you do to help these amazing creatures. You are an inspiration!
May 21, 2012 at 8:09 AM

Johanna Gehrlein said…
Hi Joan,
I am happy, you and the vet could help this little poor girl. She looks quite similar to that little one, who came to eat Wiski's food.
Hugs and greetings, Johanna
May 21, 2012 at 8:54 AM

Anna E said…
What a little panther girl! :-) Truly amazingly lucky thanks to the cooperation between all of you. Yes, it´s painful to imagine the pain she would have gone through if that "thing" had stayed in her eye.. :-( Does she have a name? hugs xo
May 21, 2012 at 2:05 PM

God's Little People said…
Hello Maine Kitties
Yes, the vet did spay her, but that was last year. Hence her apprehension of walking back in the trap!!
May 21, 2012 at 3:19 PM

Annuk said…
Oh, the poor thing! It must have been awful, can't even think about having such a thing in her poor eye! What a lucky kitty she is to have found YOU, dear Joan!!!!! THANK YOU again for all the wonderful help you are giving to the kitties on your island, and I'm so glad to hear you have such a wonderful vet!
Big hugs from Rhodes!!! :)
May 21, 2012 at 11:58 PM

Anonymous said…
Thank you for helping this sweet girl. Bless You!
I just came from the Rainbow Bridge Blog and saw Noona on there. So sorry for your loss. She was a pretty girl.
May 22, 2012 at 12:28 AM

Cat and DOG Chat With Caren said…
you were able to help her because God has a knack of putting YOU just where you are supposed to be!

Thanks so much for adding a "follow by email" option!! Now I won't miss your posts because sometimes I am just way to busy to go to my blogroll. THANK YOU! xoxoxo
May 22, 2012 at 3:50 AM

Alley Cats and Angels of North Carolina said…
So thankful for all you do for the kitties. This lady is a lucky lady because of you.

Bulldoggrrl said…
You have been told countless times, but I must add my sentiment as well...THANK YOU for doing what you do. You are an angel.
May 22, 2012 at 6:15 PM

Ouch, my eye hurts just looking at that thing! Your vet is another saint, just like you!!!

You should have received my payment via paypal.

Crafting Queen said…
So glad you were able to help her. Not sure how I missed this post. Have a great great weekend. Hugs Anesha
June 8, 2012 at 12:08 PM

Connie - Tails from the Foster Kittens said…
how absolutely wonderful you were able to help her. and blessings to the vet who came out to help.
June 24, 2012 at 5:15 PM