"Life" is a miracle! 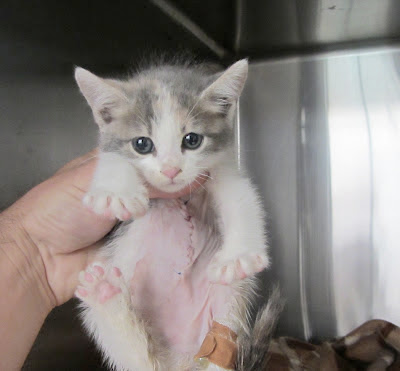 Quietly sat, recovering from surgery myself, there maybe couldn't be a more appropriate time to tell this wonderful miracle-sunshine-rescue-story of a teensy little girl named Zoe - and her sister named Irini. I seriously think it should have made international headlines - just such an uplifting story...
One morning a few weeks back upon one of my weekly visits to the vet I met a tired but very happy looking vet. Upon inquiring about the slightly tired look he told me about this amazing and quite dramatic operation he'd performed just the day before. A lovely Greek/German couple had come to the clinic with a couple of kittens they'd spotted on their holiday. They had decided that in spite of suffering from cat allergies themselves, that there was no way they could leave these little kittens behind (bless their hearts!!! - my kind of people). They wanted to give the kittens a health-check and had decided to find them a lasting home back in Germany.
They'd already figured that it didn't look very good with one of the kittens. She was a lot smaller and suffered breathing difficulties and was limping. Upon examination it was discovered that she had suffered a diaphragmatic hernia which was serious and required immediate surgery. It being a not altogether inexpensive kind of surgery the young couple was left in some contradiction upon hearing the cost of the surgery. It was obvious it had blown their holiday budget way out of proportions. But yet again our amazing vet came to the rescue and offered to do the surgery for half the price - I'm pleased to say that he responds very well to kind-hearted people being one himself. 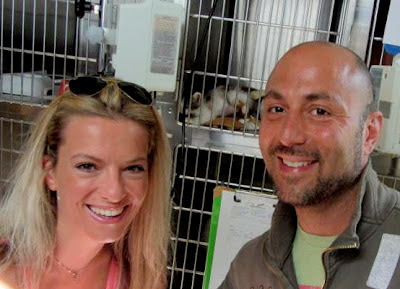 The lovely young couple and their precious "cargo" in the background
In spite of it being a procedure that was also not without risks it was decided to instantly go ahead with the surgery to try and save Zoe's life. But... the vet soon found himself in the regrettable situation of Zoe going into cardiac arrest during sugergy! He started giving her heart massage but no matter how much he massaged she didn't respond. He kept going and at some point swapped with his colleague who then kept massaging her teensy heart. At some point - after 5 minutes of massaging - they even discussed whether to give up on her as there was an increasing risk of brain damage. At this point she was given a shot of adrenaline and they kept going with the heart massage. Then - suddenly and dramatically - Zoe took a massive gulp of air and started breathing on her own again! Utterly remarkably she could then be stitched back together and made a very rapid recovery. 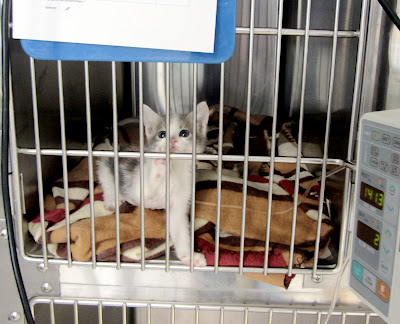 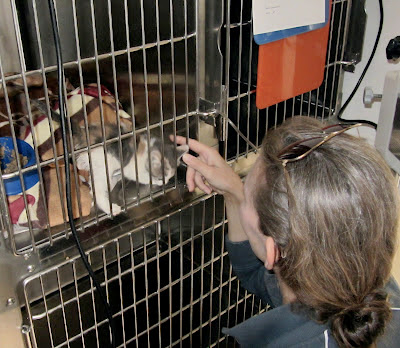 Upon hearing the amazing story of Zoe, yours truly obviously had to go and say hello to the little miracle. She was completely oblivious to her dramatic surgery and rescue and only seemed to have one thing on her mind; "Will someone PLEASE come to their senses and rescue me out of this cage and wiring."!! I of course was ready for instant adoption in spite of a more than full-to-the-brim house. Is she not the cutest thing EVER!?!?? 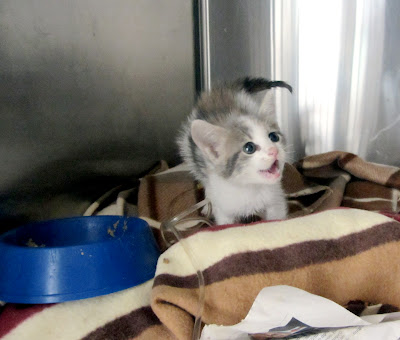 I hadn't even been told in advance, but she'd even suffered a broken hind leg (poor baby!). You can see her limb leg in the top image. But what utter zest for life... no wonder she was named Zoe - the Greek word for life. Her sister is named Irini - the Greek word for freedom. I believe these two kittens couldn't have more fitting names. What a rare chance at living these two Greek kittens have received. Just take a look at them 2 1/2 weeks later in their new home in Germany in this gorgeous little video - just hot off the press.
P.s. Zoe is the little greyish-white one - just so you can orientate yourself. There's no way you'd believe she'd suffered a cardiac arrest!!

Sandra said…
yes, the world does need more people like you and that amazing Greek/German couple! Thank you guys for changing the world for these two treasures!
June 9, 2012 at 8:44 PM

Annuk said…
Oh my goodness, she IS tiny!!! And a calico kitty like my Zoe! :)
This is the happiest story ever!!!!!!! Such a wonderful, heart-warming, uplifting story!!! Thank you SO much for sharing it, my sweet Joan! And look at these happy, healthy kittens playing happily in their loving home!!! God bless your wonderful vet and that wonderful couple! You are so right, Joan: this story should have made it to the international news! Such a "miracle-sunshine-rescue-story" indeed!!!!!

Memories of Eric and Flynn said…
Such a heart warming story! What gorgeous and playful little kittens. I can see they are going to have a wonderful life.
June 9, 2012 at 10:15 PM

Anna E said…
Zoe is such a darling - SO cute and irresistable! :-) It truly is a miracle story, truly tells of dedicated vets and Zoe´s will to live. Amazing how quickly she has recovered, taking into account her cardiac arrest...
Hope your system will have a speedy recovery as well - lots of nursing care to you my beloved friend <3 XOX
June 9, 2012 at 11:08 PM

Cat and DOG Chat With Caren said…
this story was so beautiful that it had me crying.

Zoe! How precious she is! First, the amazing couple who wanted to help her, then the vet who only charged half price and didn't give up trying to bring her to consciousness...

Of course YOU also wanting to adopt her, and now she has a wonderful new home! It doesn't get any better than this! Is the orange kitty in the video her sister Irini?

Julia Williams said…
What a wonderful, uplifting story. God bless that couple and the kind hearted vet. I hope you are doing ok, too.
June 10, 2012 at 1:31 AM

~Kim at Golden Pines~ said…
At a time when all you hear is bad news, hearing about the kindness and generosity of people and their compassion to help these sweet little kittens a story like this is needed to remind us of the goodness that there is in it too--However I am reminded of that every time I read your blog, because you are one of them as well!! Take care, and know that I'm sending healing thoughts and prayers from my corner of the world!! :-)
June 10, 2012 at 2:01 AM

Hope this kitten-love story worked as good medicine for your own healing from surgery! Wish you all the best for a speedy recovery.
My, this is such a touching story, had to share it via Google+. It resembles our story of going on vacation in Acapulco and bringing back our beloved Spicy who was pregnant with the 5 kittens we still have. Sadly our beloved rescued cat got kidnapped... We will probably never figure out how and why.
Lots of love to all involved here!!!
Mariette
June 10, 2012 at 3:57 AM

Elaine said…
All of these people are angels on earth. Those kitties are so lucky.
So happy to see them bouncing around and so joyful in the video.
Glad they were not separated.
June 10, 2012 at 5:36 AM

Jane and Chris said…
Two babies living life as they should. God bless their human parents, God bless your vets , you and, of course, Zoe and Irini. God is good!
with love and heartfelt thanks for all you do.
Jane xx
June 10, 2012 at 5:40 AM

Johanna Gehrlein said…
Hi Joan,
I didn't knew that you had an surgery for yourself. I wish you a soon recovery.
Little Zoe is such a sweetie. What a touching story. Its a luck that all those humans helped her.
Hugs and greetings, Johanna
June 10, 2012 at 11:08 AM

Johanna Gehrlein said…
Hi Joan,
I didn't knew that you had an surgery for yourself. I wish you a soon recovery.
Little Zoe is such a sweetie. What a touching story. Its a luck that all those humans helped her.
Hugs and greetings, Johanna
June 10, 2012 at 11:08 AM

Christoph Biskup said…
Hi Joan, many thanks for share this Story with us. Everyday Zoe and Iri get so much love and have fun. I will share more Photos and Videos with you so you all can see how Zoe is going on;) Because they live together Zoe is still learning from Iri and she is trying to keep up and imitate Iri. Thats why those two are inseparable! Zoe is still healthy and she dares to be more and more. Thank you so much.
June 11, 2012 at 11:46 AM

Modern Country Lady said…
hi Joan, I was worried something was not OK as I had not seen a post from you for some time and I hope you are recovering well from your own surgery.The story about Zoe is so amazing- and what a little sweetie she is.Thank goodness for that kind vet!! Get well soon dear Joan.XXX Bea
June 11, 2012 at 1:48 PM

God's Little People said…
Chris, thank you so much for leaving a comment.
I will be DELIGTHED to see and share more images of Zoe and Irini. Give them a kiss from me!
June 11, 2012 at 1:58 PM

Gebreidesjaals: Knitted Scarfs or Scarves said…
What an amazing story, that little cats, so cute! Wish you a good healhty life) hope you be better now !( you wrote had an operation ?) Hope everything is alright now! mieke
June 11, 2012 at 6:02 PM

Bulldoggrrl said…
Brought a tear to my eye..these are the stories I like to hear, those with happy endings. Your vet is a saint, you are too. If I had a million dollars, you can bet it would be sent to help the kitties.
-Glenda-
June 11, 2012 at 10:26 PM

Barbara said…
Oh, thank you for making me smile!! It is so hard to believe she had any kind of health problems! What a sweet couple. Makes my heart sing!
June 12, 2012 at 6:06 AM

Alley Cats and Angels of North Carolina said…
Oh sweet baby.. I am so thankful the nice couple decided to help the kittens despite their allergies.

She is just precious.

Oh, love this story! I'm afraid if I came to Greece I'd try to bring as many of these cute little critters back with me....

I hope you are recouperating from your surgery.

Connie - Tails from the Foster Kittens said…
*sigh* you have made my eyes leak with that wonderful story. and major love for that couple that found them and didn't turn away.

CATachresis said…
I've just seen this link on Connie's blog and had to come and see. This is so heartwarming that this lovely couple should go to all that trouble and expense. Those kitties are precious indeed xx
June 24, 2012 at 6:29 PM

Fuzzy Tales said…
Came from Connie's blog to read this...I really don't have words, either. Definitely ought to have made international news! Wonderful, wonderful, amazing story.
June 24, 2012 at 6:56 PM

www.shelter-cats.com said…
I came from Connie's blog too. So many cats and kittens are dumped at shelters that it's easy to get discouraged.
Thank you for posting a story of people with big hearts who worked together to save these small angels!

Anonymous said…
I too came from Connie's blog. EVERYONE in these blogs and videos are God's wonderful big people, caring so much for God's little people.
April 7, 2013 at 2:20 AM