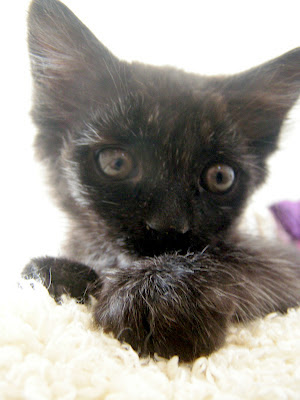 This is Cookie a few days ago. Just four weeks and a miracle later - with perfect eyesight in both eyes!! 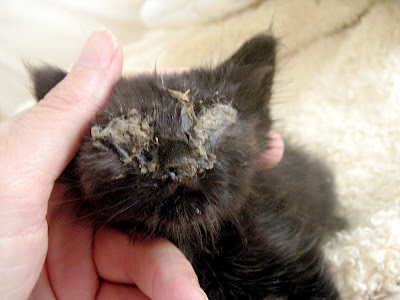 And a reminder of how Cookie looked the day I found her. 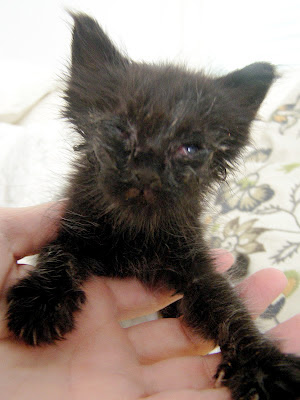 It was very questionable what would become of her eyes. We left the vet with the message that maybe the left eye could be saved (there really wasn't much in there behind the grunge!). 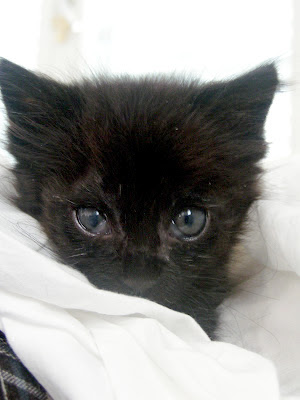 But we persisted with camomille washes and antibiotic eye-cream and it appeared already after two weeks that she might actually have eyesight on both eyes. 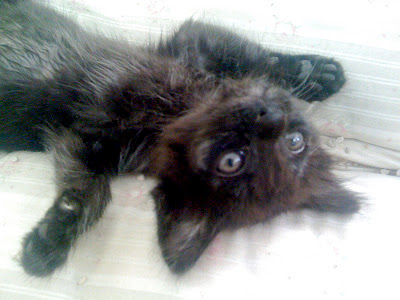 After three weeks Cookie was flashing her perfect eyes before the enamoured photographer... 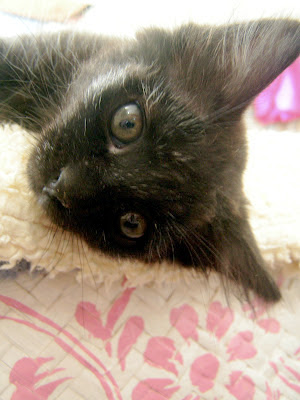 - and again a few days ago  - Cookie with perfect eyes and an utterly CHARMING personality. 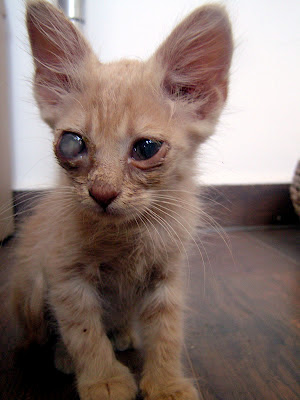 But of course there was also the promised story of Cookie's brother Biscuit (thank you Sandra for helping with the name).
Three days after Cookie was rescued from the side of a road, I spotted what I am convinced is Cookie's mother and two kittens - also with eye problems. One ginger kitten completely blind and one "latte"-tabby - partly blind. The story began to add up to me that someone had dumped their "problem" (kitty mum with three seemingly blind kittens) at the side of the road. I've fed dumpster cats in this particular spot for two years and have never seen this little kitty mum before. Kitty mum appeared confused over her location. She was very cuddly and wearing a collar - not much more that 6-8 months old herself and therefore not at all ready to have kittens. I felt in a huge predicament not really having the physical space to handle more cats - really not! But, to cut a long story short, I entually brought Biscuit home after a trip to the vet (ginger kitten never having reappeared).  At this point I had to leave kitty mum behind to see if ginger kitten was still around. I only saw him once and therefore didn't know if he was hiding in the bushes. Unfortunaly a few days later it appeared that he had somehow perished and her milk was beginning to dry up. At this point I also scooped up kitty mum. Her longhaired fur coat had just gotten more and more messy and it was obvious she was not in familiar territory. Cookie recognised both her brother and mother after 8 and 10 days - independently of each other. Kitty mum is not interested in providing milk but she preens both of them vigorously. Anyhow... back to Biscuit's progress... 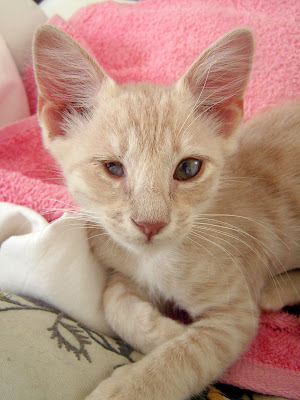 Biscuit's blind and horribly swollen and infected eye has shrunk and retreated back into the eye socket. He has an ulcer on the other eye but for sure has some sight in it and he is now a very happy little boy. He's gotten rid of fleas and worms and now has a shiny little fur coat 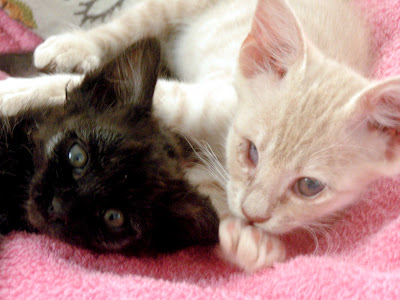 He loves playing with sis and she loves testing her strength with him. She is somewhat smaller but nonetheless feisty!! 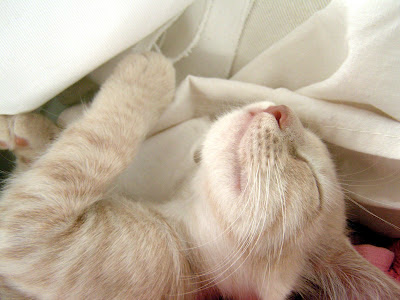 Biscuit blissed out after food and play - no longer needing to retreat behind a rock by the side of the road for his sleep (where I would always find him on his own).

highheeledlife said…
Oh my sweet Angel .. you are truly a blessing to these beautiful little souls, who depend on human kindness to protect and take care of them. Love to you across the miles..xo HHL
July 29, 2012 at 2:41 PM

Sandra said…
The names fit them perfectly as they are so so sweet! I am so glad Cookie's eyes are all right and Biscuit's (what a great name:)) looks pretty ok, too. You are a blessing for these cats, Joan. NO, no more hiding sweet babies.
July 29, 2012 at 3:35 PM

~Kim at Golden Pines~ said…
I continue to say a prayer of thanks for your being at the wrong place for these cats at the right time! I hope Mom and these sweet kittens continue to do well!!!
July 29, 2012 at 5:01 PM

Marg said…
Wow that is like a miracle for both of them. We are so glad that you found them. That is really something that they both cleared up pretty darn good. Whoo Hooo for Joan. Hope the Momma kitty is all right too. It is so sad when people just put animals out.
Take care and have a good day.
July 29, 2012 at 5:09 PM

Connie - Tails from the Foster Kittens said…
wow, what a wonderful job and how far they have come in healing!! What a wonderfully happy outcome.
July 29, 2012 at 5:11 PM

Crafting Queen said…
I know I keep saying this but THANK YOU for all that you do for these poor litte creautures. Thank you for sharing the progress of the kittens, really lovely to see them getting better.
July 29, 2012 at 6:08 PM

Cat and DOG Chat With Caren said…
Ohhhh precious Cookie!! Darling Biscuit!! I cannot get over how Cookie has progressed and look at Biscuit as well! Truly a miracle ((((hugs))
July 29, 2012 at 11:27 PM

Johanna Gehrlein said…
Dear Joan,
its really a miracle how the cats improve under your care. Cookie is so sweet and so is her brother. Ginger is a little lion. What a luck the eye is not so swollen anymore. It must have been painful. He must feel like in heaven now. Food as much as he wants and a save and warm place. So nice to see.
Hugs and greetings,
Johanna
July 29, 2012 at 11:46 PM

Modern Country Lady said…
Bless you- for all you do.What sweet little cats- thank goodness you have taken the time to look after them.Hope you are well yourself and recovered after your operation.Hugs as always fro you and all your kitties.XOXO bea
July 30, 2012 at 12:36 AM

ANGEL ABBYGRACE said…
The bliss in Cookie's face is so evident to be reunited with her family. Bless you oh bless you for rescuing Biscuit. It warms my heart even though I know how difficult some of these choices are. One more life saved....

What a great LOVE story, all over... it is a never ending love from your side.
So glad that Cookie fully regained her eyesight and her brother seems to be doing fine as well.
Sending you hugs and love,
Mariette
July 30, 2012 at 1:43 AM

Annuk said…
Oh my Goodness, another wonderful miracle story!!!!! It's so heartwarming to see these precious babies blooming!!!!!!
THANK YOU sweet angel for all your amazing work, your heart and your wonderful soul! God bless you!
xoxoxo
July 30, 2012 at 2:51 PM

The Lee County Clowder said…
Purrrrrrss to Cookie, Biscuit, and their kittie momma. We hope they all have a long, happy life ahead of them.
July 31, 2012 at 12:56 AM

Catherine said…
Honestly Joan, I don't know how you do it. I guess one kitten at a time right? So many sweet little kitties needing help, and there you are. Call you an Angel just doesn't say it all.

505whimsygirl said…
Oh, they are so precious. What a wonderful recovery for everyone.

Anonymous said…
Those poor kitties. Bless you for helping them! They are precious!
August 1, 2012 at 4:42 AM

Everycat said…
What lucky & beautiful little darlings, to have their lives saved and be nurtured back to health by you. Thank you for helping all the little cats. The world needs more people like you :)
August 1, 2012 at 9:05 PM

Seville at Nerissa's Life said…
Thank you so much for going back for these babies and bringing them into their home. You really are an angel.
August 2, 2012 at 3:35 AM

Alley Cats and Angels of North Carolina said…
Thank you so much for taking these babies in. They are very lucky to have you care for them.
August 2, 2012 at 5:11 AM

Chrissykat said…
They are precious blessed babies. Looking forward to reading updates about these cutie-pies & seeing a pic of their mum.
August 2, 2012 at 8:37 PM

Cornelia said…
It is amazing how Cookie and Biscuit - lovely names they both have - look now under your love and care. It is really amazing to see them so healthy and growing by being/playing together. Lots of love to you and the adorables.
August 4, 2012 at 1:21 PM

Anne Butera said…
Your blog is so moving to me. How loving and selfless you are in your care for these abandoned cats. So horrible and heartbreaking that anyone would treat them like that in the first place. What an amazing recovery they have made thanks to you.
August 6, 2012 at 8:16 PM

Anna E said…
Ít is amazing and miraculous to see the pictures and the results of a lot of work (and money!) and dedication. And having seen some of the stray cats on the island myself now, I must say it was a chok to see how skinny they really are, when living by the dumpsters..!! However, I didn´t see as many as I had feared, and I know for sure that it is because of your - and other kind people on the island - work and rescues! You are like a handfull of agents placed there by God to make things rightfull and as meant to be. And you truly do!!!
In support and admiration Anna E.
August 16, 2012 at 10:36 AM

Jans Funny Farm said…
What a horrible story. So glad you rescued the kitties and they are doing so much better. Don't understand how people can just dump animals!
September 1, 2012 at 5:12 PM