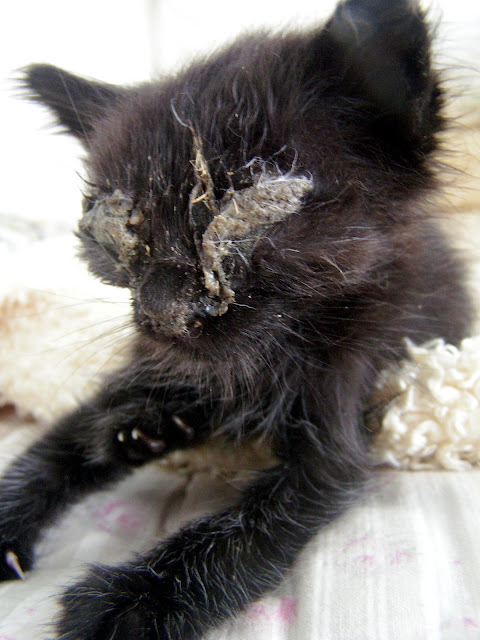 Just found!
No pun intended, but you might rightly rub your eyes at this image and say what???
This is the kitten I found  when I went in one of my searches for Little Grey's (ref. last post) kittens. Sadly I haven't found any of Grey's kittens but I heard this little girl cry out for help when I went looking again Friday morning. I heard her a little further down the road from the dumpsters and instantly ran towards the noise I heard. I soon discovered her lying in the side of the road and I was horrified at the state of her eyes. Where there used to be eyes there was just two huge "mud-cakes."  She is just about three weeks old and she was very bony. She had for sure been lost from her mom for some days. How she'd made it on her own remains a mystery.
There was nothing I dared do with the state of her eyes so off to the vet I went. Whilst I waited for my turn, the veterinary nurse came with a vet tissue and confidently lifted the "cake" to reveal an unbelievable amount of puss. Even when the eyes themselves were revealed it was just two little wholes full of puss. It looked just horrible. Then the vet had a go - first flushing the dry mass and then using a thin tweezer gently pulling off the mass in little pieces. At last it was possible to flush the small remains of eyes. It appeared that the left eye might be ok but it was more questionable with the right eye.
She was very dehydrated and needed tube-feeding with an extra nutricious food, so we agreed that she would stay at the vet for the first 24 hours. The day after the state of her eyes looked more promising and she was eating well - so I brought her back home. 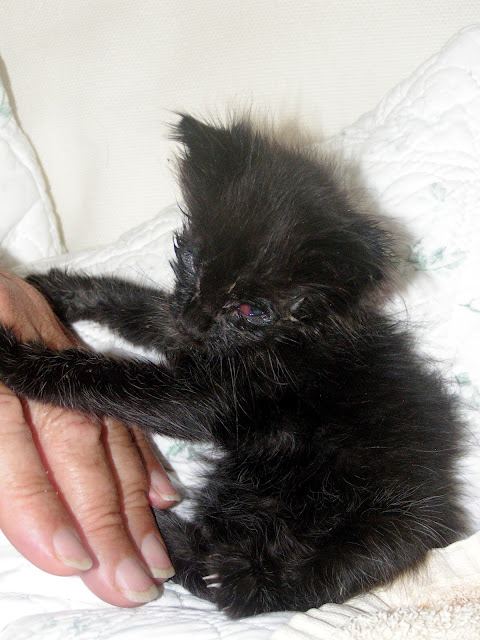 24 hours later
Just back home - and her beautiful tiny eyes are revealed. As you can see it's very red but we're working on it around the clock - giving her regular washes and antibiotic eye-cream. She's also having oral drops of antibiotics for a  sniffle - and she is having loads of rich food. It no longer needs to be put down her throat - she kind of suckles the "nipple-tube" very eagerly and she of course looks a complete mess afterwards. Then we have a great big clean and then she is ready to play. 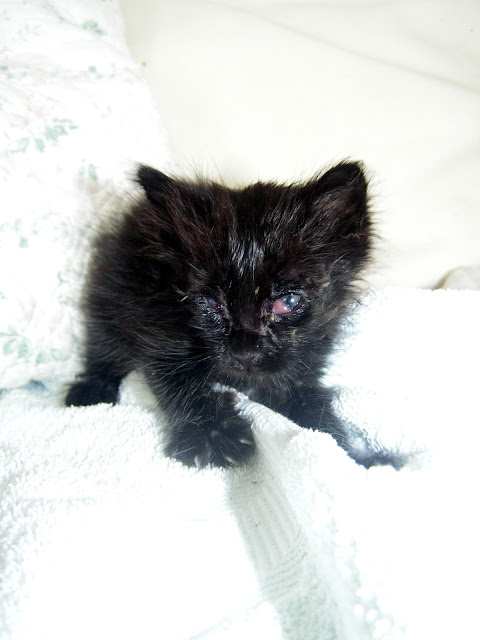 48 hours later.
She didn't sleep easily the first day - it seemed she was very anxious of being abandoned. Whenever she fell asleep she would wake up very easily and would kind of need reassurance that we were right there. Then she would nod off again. 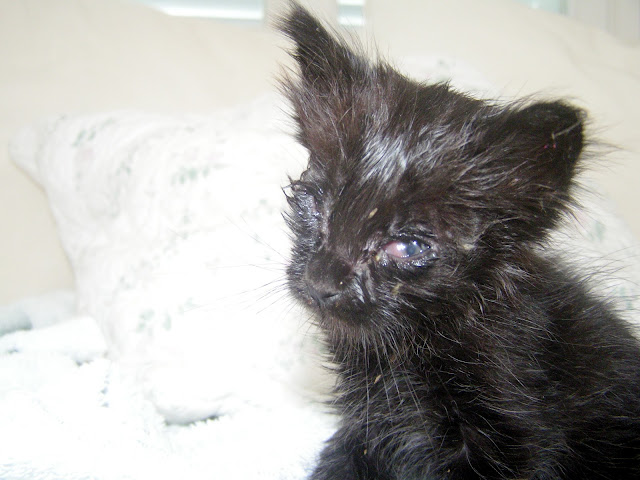 - and again 48 hours later
Today she is relaxed, goofy and playful  - and she has got the cutest personality ever. Aren't you ready for your heart to be scooped up in a cup over these images?!!
I named her Cookie and I believe she lives at the grace of Little Grey.
I will always think of Cookie having survived because of Little Grey. Had it not been for her loss I would not have gone on the outlook for kittens and there is no way Cookie would have survived.

Sandra said…
Oh my, Joan, Cookie really is a fighter if she survived on her own for as long as she did. My heart sank when I saw the first picture even though I knew that was the beginning of a better life for her... but it made me think about all the other kittens or other baby animals, that are so often left alone in this world with no one to care for them. I wish we could save all of them.

Good luck sweet Cookie... yes, I am already in love. She is so so cute and I cannot wait to see her blossom.

Catherine said…
Poor little Cookie! Oh what a sweetie! I am sending good thoughts and warm wishes that this little miracle keeps getting stronger and stronger! Hugs!
xo Catherine
July 1, 2012 at 4:04 PM

wildcatwoods said…
Such minor things like colds can cause such serious harm for tiny kittens. You are right- if not for the missing kittns you would not have found this little one. Bless you for all you do.

Marg said…
Oh Joan, we too thank you for all that you do. For sure little
Cookie did survive because of Little Grey. That is so Sad about Little grey. But it sounds like Cookie is going to make you smile. She is so darn cute. Glad to hear that she is playing and getting more comfy. Take care and thanks again.Wish I was there to help you.
July 1, 2012 at 5:53 PM

Becca said…
Hi Joan...just trying to get caught up with you since my move. Hope little Cookie is doing better...you are an angel helping these dear little creatures.
July 1, 2012 at 6:48 PM

Oh, bless her heart (and yours). That first photo just made my own eyes water. I'm glad Cookie is doing better! What a great sign that she's in a playfull mood.

Thanks for all you do!

ANGEL ABBYGRACE said…
Joan
Too many people would have turned and run if they had seen little Cookie. You are the angel on her shoulder with the help of Grace...or perhaps it was Grace who was the angel leading you there to help Cookie back to good health.
Bless you.

Johanna Gehrlein said…
Dear Joan,
oh my, what pictures. Cookie looked so ba in the beginning. It is soooo heart touching for me to see the start. I think she had the best luck in her life that she met you. No wonder that those cats get very close to you and never forget that you rescued them. I wish you both, Cookie and you, that everything will work out right good.
Hugs and greetings, Johanna
July 1, 2012 at 8:47 PM

Oh my, I've never seen a kitten in such a terrible state. How those little things must suffer before succumbing to death... That would not have been far off for Cookie. Luckily you searched for the other kittens. Her fate was to be rescued and she still needs more healing but that will be swift. Looking forward to looking-better photos from her yet.
Love to you.
Mariette
July 1, 2012 at 10:16 PM

Connie - Tails from the Foster Kittens said…
I have dealt with some pretty horrific eyes in my ten years of fostering, but that first image stopped my heart. I pray that she will be able to retain both of her eyes.

Annuk said…
Oh my Goodness, such a precious little girl!!!!! Thank you so much for sharing these wonderful news, dear Joan, I'm sure she will get better and better by the day! And she's playing already!!! I can't wait to see more photos of her getting the rightfully beautiful cat she is! Can you kiss her for me, please? I would SO love to hold her and kiss her!!!

Once again, I think that Life has its own ways to show us its mysterious designs... YES, sweet little Cookie lives at the grace of Little Grey... and I do strongly believe that Little Grey is a little angel in heaven and she showed you the way to Cookie. Cookie's precious life is her present to you. God bless Little Grey. And you, you sweet angel.
Loads of love from Rhodes!!!
July 2, 2012 at 12:13 AM

Cat and DOG Chat With Caren said…
"the Lord giveth and the Lord taketh away"...you lost one but gained another
xoxoxo
July 2, 2012 at 2:24 AM

Judy at GoldCountryCottage said…
God Bless her and you. Thank you for what you do for the animals. She is such a sweetheart and a fighter. I can't even imagine what a horrible start she had but she is in good hands now..Happy Sunday..Judy
July 2, 2012 at 2:35 AM

Carole said…
You are an angel for sure. I can't imagine what would have happened to her if you had found her one day later. I pray she makes a fast recovery but I know she is in good hands.

highheeledlife said…
This little darling is so precious I'm so happy that you discovered her and her world is going to be much better. Can't wait to see photos of her as overcomes this little hurdle on her journey of life. You are a blessing my friend! xo HHL
July 2, 2012 at 4:37 AM

Modern Country Lady said…
You really are the best of women..thank God you are where you are and can do so much for these lovely little cats.Joan, you always amaze me.Bless you and all your cats.XXX
July 2, 2012 at 4:33 PM

Marilia said…
I can only thank you for your generosity and your help in this small, helpless creature. I hope Cookie can have a long and happy life, because you're an angel that already appeared in his life.
July 2, 2012 at 6:46 PM

purpleleath said…
You are such a blessing! I can't wait to see more photos of her getting better and better!!! Tears of joy are running down my face...a precious life has been saved...she's going to love you so much!!!! Think of all the great moments that are coming!!! :-)
July 4, 2012 at 8:53 AM

rosenresli said…
I saw the first picture and had tears in my eyes. What a poor little kitty you found but what a great luck that YOU found her. I´m so glad to hear that she is doing better and I hope that her eyes can be healed. I´m sure that she is very thankful to be rescued. She needs so much TLC and then she will be a happy little cutie. I´m sure that you are her angel and she knows this!

Anonymous said…
There is a special place in Heaven for souls such as you. I know how heartbreaking it is to see these helpless creatures in such pain, but you are such a blessing to them. God bless you!!
Hugs, Margo@Legacy of a Single Girl
July 23, 2012 at 5:50 PM

Geisslein said…
oh my, these heart-touching pictures make me tears in my eyes...Greetings from Germany, geisslein
September 6, 2012 at 4:40 PM