When you love a little cat 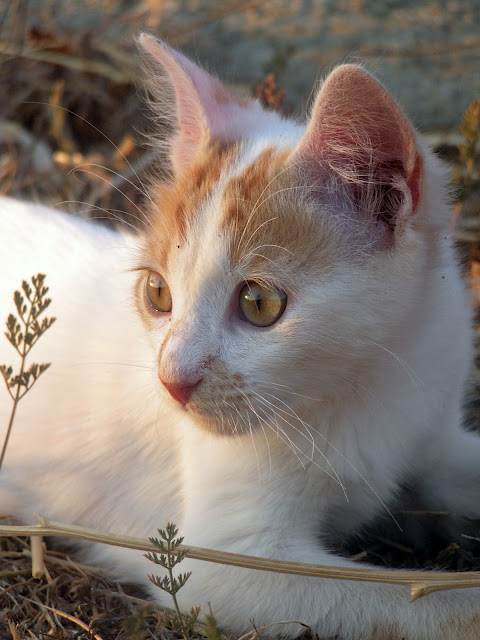 It's been an eventful summer - something I've come to gradually accept as part of life when you live with 30+ rescue cats. When you rescue a stray or a dumpster cat there's simply no telling what their "medical record" is. You don't know what they might be a carrier of or what other at first hidden weaknesses they have.
I first mentioned this beautiful little boy named Snowy back in mid-June. Rescued by his night in shining armour (DH) at some point when I was away. At the point of rescue he suffered a nasty flu and an accompanying respiratory infection. Also he was quite emaciated but through lots of TLC he quickly put on some weight and became a super active little guy even though he struggled to fully get rid of the respiratory infection. 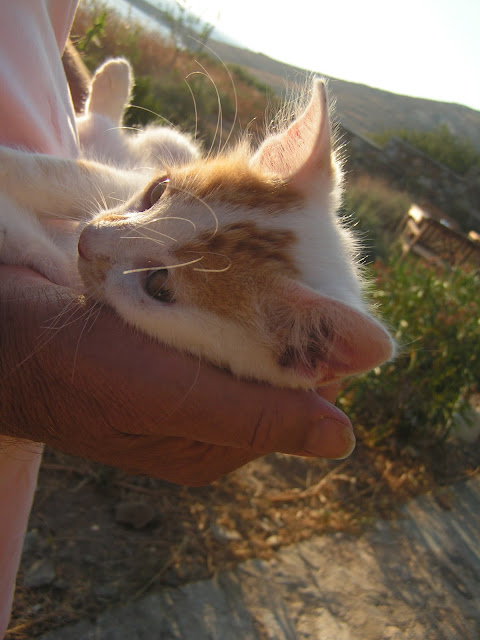 Snowy in the hands of his knight in shining armour!
The flu went but the respiratory infection persisted in spite of several antibiotic treatments. We first got a whiff of the severity one day on our way back home from the vet where he had just had an antibitotic shot. He suddenly collapsed in the car on our way back home. I was able to get him around again quite quickly and then we sped back home - lets just say way beyond the speed limit! We were kind of surprised because at that point the vet did not detect any wrongful noises on his lungs. Anyhow... lots of rest and he appeared well recovered again.
Until a few weeks later when I was in the garden one early evening (during an extended heat wave). With several cats around as usual, and Snowy too. He was playing around my legs and suddenly collapsed on my feet. This time too I was able to get him back and rushed him inside a cool and shady room. Only this time he actually went into a very bad fit of hyper-ventilation - eyes suddenly glazed over and the white appearing instead. Then things went real fast... phoning the vet who appeared on our doorstep 20 minuttes later. I simply didn't dare move him in this state. Remarkably by the time the vet arrived Snowy had gradually come around again  - once again able to stand on his legs and breathing without hyper-ventilating. The vet examined him and gave him an intibiotic shot and suspected he might have pneumonia (in spite of not being able to detect any noises on his lungs).
We were then instructed to keep him strictly indoor for a week. Even after that week he remained indoor and only had small 5-10 minutte outings. During this time he had another visit from the vet to give him yet another antibiotic shot and he was brought in for two different xrays. The first was too blurry and the second showed some minor signs of damage. 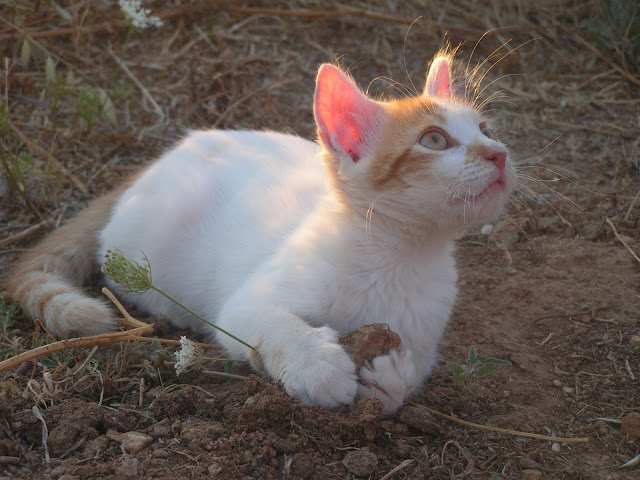 After about 5 weeks indoor Snowy gradually had just a little bit longer outdoor - strictly supervised. He seemed to cope and was of course delighted every day to smell the earth and play (I would have to keep seperating him from play-figthing). But one day he apparently had just had too long and some hours later (being back indoor) went into a very bad fit again. This time the vet wasn't able to come around (due to being alone in the practise) so in a state of great emergency I sent my husband off with Snowy, whilst I let the vet know they were on their way and that it was serious. I actually didn't expect Snowy would make it... it was that bad. But miraculously he made it and was put on oxygen for 24 hours. He stayed at the vet for 4 days, had intravenous shots of antibiotics every day, treatment for heartworms and another xray. This time around it showed that he had some permanent damage to the front part of his lungs meaning that he only has something like a 65% functioning lung capacity. This now means a lifetime on antibiotics and a permanent indoor life.
Snowy came back home last Monday and he is still gaining strength. This time around really did him in and his appetite is nothing like it used to be. But we keep on figthing as long as Snowy has the strength himself. The last few months have been a testing time for Snowy with 4 visits to the vet (including the longer stay), 3 xrays (under full sedation each time of course), antibitotic treatment after antibiotic treatment, 3 home check-ups by the vet, heartworm treatment, earmite treatments... this boy has been through a couple of years worth of treatments and check-ups already. And he is up for another home check-up tomorrow!
But during all this time he has been the greatest sport - even seeming to understand that he needs to stay indoor even though his little heart is running wild outdoor with his mates.
He really is the sweetest and most innocent little cat and we naturally just love him to bits. I truly wish some healing miracle would befall Snowy - he really deserves it. His attitude through all this has been stellar.
If anyone is able to make a contribution towards Snowy's medical treatments I would be so very thankful. My vet is once again working on the basis of being paid later as I simply can't keep up with veterinary bills (all other cats included) and it is of course utterly invaluable that I can keep up this honor agreement. THANK YOU.
P.s. As usual contributions can be made via the donate button to the right on this page.
P.p.s. All the above images are taken in June whilst Snowy was at the peak of his strength.

Seville at Nerissa's Life said…
What a lovely little boy, Snowy is. You've given him a life he would never have had without your help and love. Thank you for helping this little guy.
September 2, 2012 at 5:40 PM

Johanna Gehrlein said…
Dear Joan,
Snowy is such a cute cat. What a luck, your dear hubby found him. Snowy wouldn't be alive otherwise. I really believe that it costs a lot but is worth. Your all deserve some financial assistance.
Hugs and greetings, Johanna
September 2, 2012 at 5:57 PM

Crafting Queen said…
Poor Snowy, glad you are there to look after him. Lots of hugs Anesha
September 2, 2012 at 6:29 PM

Marg said…
Oh Snowy sure looks like a trouper. What a shame he has so many problems. Poor little thing. Maybe as he grows, his lungs will get better and that miracle will come your way. Don't give up, miracles do happen. Take care. Good to hear from you.
September 2, 2012 at 7:14 PM

What a fate for this little kitten. His body must be struggling on and on with all the chemicals put into its tiny body.
Hugs to you,
Mariette
September 2, 2012 at 9:35 PM

Annuk said…
Oh dear Joan, what a sweet little boy... and such a little fighter in his tiny body! My mom had Theo who had a similar hard start, the vet said that his lungs looked like "an old cat's lungs" -- and he was just a few months old. Now he's two years old and doing fine! I really hope that Snowy is going to get over his problems too! Thank you for all you are doing, you are an angel, Joan!!!
I'm praying for you and sweet little Snowy!
Lots of hugs,
Anna & Zoe
September 3, 2012 at 12:06 AM

Sandra said…
Snowy was really lucky to have found a way to your home and hearts. Such a little trooper he is and he deserves all the help available. I hope that he grows out of it, like one of your friends wrote somewhere above. Hugs to the both of you.
September 3, 2012 at 8:22 AM

Sandra said…
Snowy was really lucky to have found a way to your home and hearts. Such a little trooper he is and he deserves all the help available. I hope that he grows out of it, like one of your friends wrote somewhere above. Hugs to the both of you.
September 3, 2012 at 8:22 AM

Jane and Chris said…
Snowy is a survivor by nature,by nurture he'll surpass all expectations.
Jane x
September 3, 2012 at 2:20 PM

Modern Country Lady said…
What a worry for you, and what a brave little cat. It must be so hard for you to see him being ill all the time.Hope he will recover somehow! Much love.
Bea
September 3, 2012 at 8:29 PM

ANGEL ABBYGRACE said…
Snowy is such a sweet little boy. WE did just go over and drop a bit in the donation fund. WE wish we could do more. YOU are in our thoughts and purrs.

Bulldoggrrl said…
I donated a small bit, but hopefully if everyone can give a little, it will become a lot. Bless you and Snowy's heart, you are angels. Wish I lived close so I could help out physically.
September 4, 2012 at 6:13 PM

Catherine said…
Such a little sweetie! Sending lots of love and warm wishes that Snowy gets better!
xo Catherine
September 5, 2012 at 12:09 AM

Barbara said…
What a fighter he is! And what an awesome vet you have (and of course, you and your husband are awesome for all that you do for those sweet kittens!) Saying lots of prayers that Snowy stays well from here on out.
September 5, 2012 at 1:56 AM

Everycat said…
Keep on fighting little Snowy! I wondered about asthma too, it can sometimes start after long URIs. Sending love & rumbly purrs :)
September 8, 2012 at 10:11 AM

Maine Kitties said…
Joan - if the next round of antibiotics don't do the trick, it wouldnt hurt to try a course of prednisolone for the asthma....if the vet even considered it, it is worth doing!!! :)
September 8, 2012 at 10:53 PM

Blue Lavender said…
My dear friend Joan,
Snowy is a very brave little guy, must be very tough for him to deal with all this medication, I hope everything gets better for him.
You are such a wonderful woman, with a huge heart.

My most sincere apologize because I haven't visit you more often. I've been very busy this year with our vegetable garden, and today I just came for a little while to catch up with my friends.
Hope you are doing well and I also wish the best for Snowy.

Send you a big hug, my friend

Alley Cats and Angels of North Carolina said…
We have a kitten with a similar diagnosis, he's doing better on Azithromycin. Purrs and prayers that Snowy gets better soon.