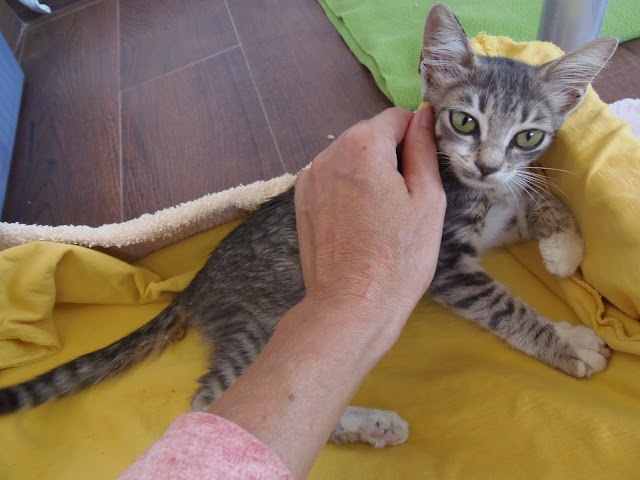 Thank you all for your heartfelt prayers and comforting words about Ivy.
Sadly, in spite of all of our efforts, Ivy passed away yesterday morning.

Ivy had put on such a valiant and brave fight since Thursday morning when she was brought to the vet. It's been a mystery to us why she endured as long as she did. But I guess our willing her on - and telling her how much we loved her (oh my goodness did we love her!) and your prayers kept her going. She was exhausted beyond words and was therefore lying completely motionless - just struggling for her breath all the time.  But upon our visits (every morning and evening) she mustered ALL her strength to utter teensy little squeaks. Obviously recognizing us. It made me teary - she moved me so much. She fought so unbelievably much and that's why we put all our efforts into willing Ivy on.

But yesterday morning we knew things were not good with Ivy. Her body temperature had dropped drastically and she'd been put on a heating pad. Her little body able to fight no more. Still of course we hoped. But I told her that if she could take it no more then she should go home as fast as possible. We realized that maybe we needed to let go for her to be able to let go. But we also we let her know that if she was able to pull through - then her forever earthly home was waiting. Before leaving this morning we both kind of knew that it would be the last time we saw Ivy. It was therefore very difficult to leave. Shortly before we left Ivy did something remarkable - something in her state she wasn't even able to do. She was way too weak. But she rolled over on her side - almost on her back... threw back her head and exposed her chin to me and purred. I kissed her, cuddled her chin and told her how much I loved her - and cried. I knew she was saying THANK YOU. She gave me her last bodily efforts for that gesture and we knew we it was time to give her peace. So we left.
Just a bit more than an hour later the vet called to say she had passed. We were overwhelmed with sadness but Ivy deserved that home where she would find instant relief from her suffering and have her heavenly sleep. We instantly collected her and found a spot for her in the garden - not far from Lilly and Noona.

She didn't die alone. Ivy was rescued and she was LOVED. She now rests in a place where her way too short life will be forever remembered. I thank you for caring for Ivy too.


P.s. I did want to write this yesterday but wasn't able to because our internet went down.

Johanna Gehrlein said…
Oh dear Joan, this is hard to stand. I know how strong you all tried to keep Ivy alive. How sweet that she showed you how much she understood your efforts about her live. And it is wonderful that she had this short time with you and a loving home.
Hugs, Johanna
October 8, 2012 at 7:28 AM

Crafting Queen said…
My heart breaks for you. Ivy is now at peace and in no more pain. I know this does not ease your pain but you think all you could for her. Thank you! Lots of hugs. Anesha
October 8, 2012 at 11:04 AM

Annuk said…
Joan, sweetest Joan... my heart is breaking for you and tears are in my eyes... She was, IS such a brave little soul, and she deserves only the best! So it was so wonderful from you to let her know she could go Home as fast as possible if she needed to... This little Angel is Home now, she is suffering no more and she is free to fly and run free with her little brothers and sisters, having known human Love. Yes, she got to know human Love in her brief earthly time...
You know, dear Joan, my Mom always calls this the "flight Home"... and she thinks that special souls have the privilege to fly back Home very early. She always tells me, and I do believe her.
Ivy is a lucky baby, because she got to know Love. She has taken all this love, your prayers and our prayers with her on her trip Home, and by thanking you with her last purrs and rolling she let you know!
Bless this little angel.
And bless you, Joan.

Sandra said…
Oh Joan, I am so sorry Ivy didn't pull through. I had to read the news in two tries as I am at work and cannot cry even though I had and still have tears running down my cheeks. I was so hopeful and I just know how heartbreaking this is for you. She will always be remembered thanks to your big heart. Hugs
October 8, 2012 at 2:29 PM

Barbara said…
Ah, Joan, I'm behind on blog reading again, but spotted this on my reader and had to send my condolences. You have such a wonderful heart to care for these kittens and show them love in their short lives. Bless you!
October 8, 2012 at 3:50 PM

Bulldoggrrl said…
I am at a loss for words. I am so sorry. Bless your heart for caring and loving little fragile Ivy. Thinking of you...
Glenda from KS

sunshine said…
Oh my dear friend, my heart aches and my eyes get teary reading this, but you are amazing and remarkable soul for giving this animals love and kindness until their very last breath. So sorry for your loss, RIP little Ivy!
October 8, 2012 at 4:34 PM

Tina said…
I am so sorry and sad for you and Ivy. I was so praying and hoping she would make it, if anybody could have helped her it was you!
October 8, 2012 at 4:43 PM

Tina said…
I am so sorry and sad for you and Ivy. I was so praying and hoping she would make it, if anybody could have helped her it was you!
October 8, 2012 at 4:43 PM

Connie - Tails from the Foster Kittens said…
that so stinks. I hate that we can not save them all, but it is a blessing that she was loved - it is so much more then way too many get.

Random Felines said…
I am so very sorry. Sometimes no matter how hard we fight, we have to let them go. But better that she knew love and comfort....
October 8, 2012 at 7:12 PM

Mo said…
I'm so sorry we lost our sweet, tiny Ivy with her beautiful green eyes.

So so sad yet comforting to know she was truly cared for and loved.

Elizabeth said…
I'm so sorry that our collective wishes for Ivy's recover did not,in the end, help her. Now my thoughts are with you as you come to terms with your loss. Elizabeth xx
October 8, 2012 at 11:00 PM

ANGEL ABBYGRACE said…
Joan
I know that there is no reasoning that can explain why these things have to happen. They do and that is all. I do know that sweet Ivy knew she had found her heaven on earth when she found you. She knew love and care and warmth and she knew she was wanted. At least she left with that in her soul....and of course she left an indelible mark on those souls who knew her.
Fly free Miss Ivy.

Cornelia said…
What a journey here for a little soul! Ivy's story move me to tears. I thank God and you that she found you and she found bliss and unconditional love and the sweetest care. Are these warming valuable qualities which are rare and fine not the needs of any soul on the planet no matter if plant, animal or human? Noona and Lilly and now Ivy are and have been in heaven on earth<3
October 10, 2012 at 3:42 PM

Anya said…
Yes, me too - at work with tears in my eyes. Bless you for making her last days a comfort. A colleague here is nursing two such orphans - severely malnourished. They are hanging on so far. Bless all who work tirelessly for those who suffer. - Anna (Quebec)
http://catwhisperer.blogspot.ca/
October 10, 2012 at 7:15 PM

Everycat said…
Bless her little furry socks and bless you for helping this little one. Sometimes these little souls have just too much against them and with all the will and help in the world, they can't survive.

But they can be helped, and you did this for little Ivy so well. You couldn't have done more. She knew she was loved and safe at last which wouldn't have been the case if you had not stepped in

Alley Cats and Angels of North Carolina said…
My heart is breaking for you. I am so sorry for your loss of the beautiful Ivy. A very hard part of rescue is knowing when it's time to let them go/help them pass. Thank you for being strong enough to make that decision. I wish I could hug you and help ease the hurt.