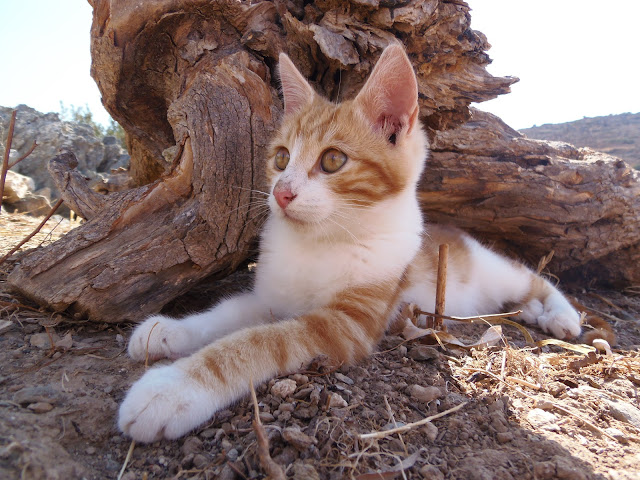 Needless to say, the beautiful little Ivy left a huge void after she went to the rainbow bridge.  Some cats or kittens just have that effect no matter how long or short time we've had together.

We're in absolutely no need of another cat around here but I got this strong feeling that Ivy had left behind the wish for another little life to have the chance she didn't get - to LIVE. Maybe it sounds strange but I did indeed get this feeling. It actually caused me to go for a drive to a church in a deserted area where there's always a cat in need. Only this time I found 30 something cats and kitten in need!! Sneezing and wheezing, eye problems, skin problems, limping and what have you... it was all there! BUT... this time around it actually made me realize that I couldn't take it all on. A VERY tough realization. And with no one to turn to to help solve the problem. There simply is no cat shelter on this island. I decided to drive away.

Apparently Ivy's "lucky wish" was not to be found there... he appeared a few days later a bit further down the road from where I feed the dumpster cats. I spotted this adorable little white and ginger tabby boy trying to charm a few ladies walking along the road. I instantly knew his predicament and found myself uttering "oh, oh..." He was clearly freshly dumped by the side of the road. I know the cat population so well in this area and he clearly did not know quite were he was. He had this cute but bewildered sense about him. I don't know if the rumor is spreading that cats are fed here and people think it the perfect spot to dump their "unwanted goods." Anyhow... I quickly got hold of him and boy! was this boy hungry!!!

I decided to leave him there in the hope he wouldn't be there the next morning - meaning that I hoped for an off-chance that he'd come from a house much further down the road. But naturally he was walking along the street the next morning - seeming just as bewildered and adorable and cuddly as the day before. And HUNGRY.  Well, could I leave these eyes behind??? 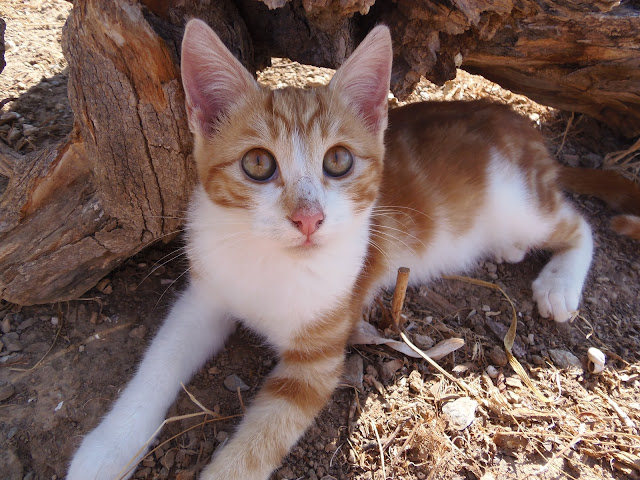 Of course not. So back home we went. He got installed in a caravan in the garden and he instantly acted as if he'd come home. He drank and he ate... then he ate some more and some more! Goodness knows how many days he'd gone without food. Then he nestled deeply into an old sleeping bag and slept like a baby - smiling to the sunny rays coming through the window. He'd indeed come home. 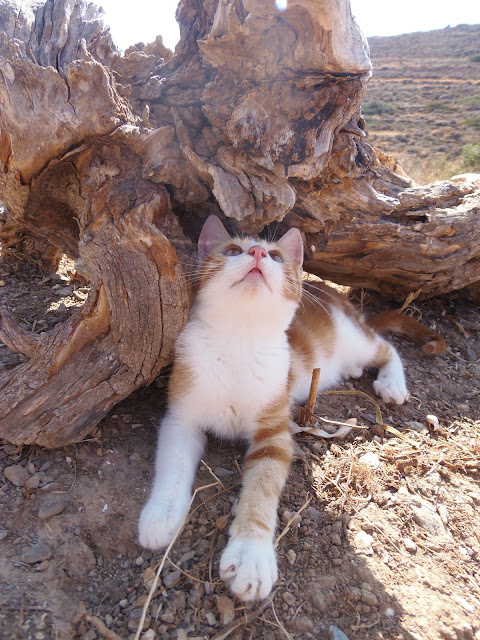 I have to admit that there was something almost refreshing about rescuing a boy that wasn't already a wrecked little life. It appears his worst trouble is diarrhea and ear mites. Having had the treatment his ear mites should soon be gone and I'm sure so will the diarrhea with the right food. 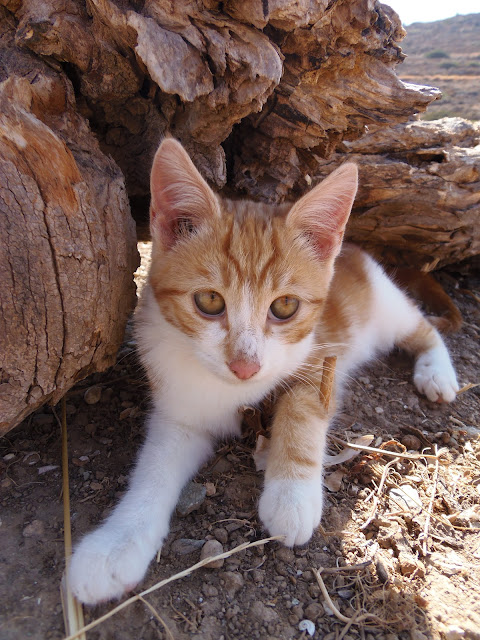 I think he about 12 weeks. His eyes are just going from baby blue to his mature eye color. Believing he was dumped I can't imagine how hard that must have been... to have left those imploring eyes behind. He is loyal purring nose-rubber who just follows my every step. 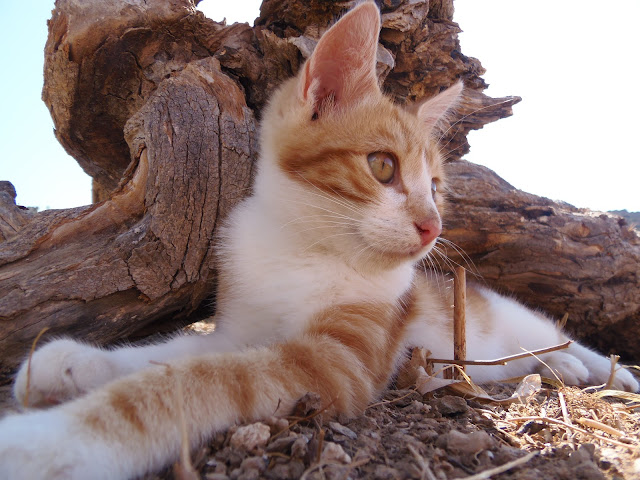 Today he had his first outing in his new surroundings and he owned the space! Now we just need to find him a fitting name. What do you think?? I'd be grateful for suggestions.

If anyone is able to help contribute towards his vaccination that would be most appreciated.

Connie - Tails from the Foster Kittens said…
I don't know why, but I see Opus when I look at him.. You could call him Opie :)

Crafting Queen said…
I love Ginger and white cats and he is just adorable. I would suggest Skipper as a name for this little boy. Can't wait to see more photos of him.
October 15, 2012 at 5:07 PM

Deb said…
I would love for him to follow me around all day. He would bring joy to the day. How fortunate for him that you found him. So nice to know he is not ill. I like the name Jake for a boy or Timmy. Give him a big hug for me. Hugs, Deb
October 15, 2012 at 5:41 PM

Bulldoggrrl said…
A little something in PayPal for the new sweet one.

Oh my, I know what you are talking about. This one got lucky for not having to really suffer before being rescued. Our Smokey is on the mend. His eyes are not quite okay but he does not allow me to put the ointment in. Eating his pills with the meals is no problem and he has a ferocious appetite. What must that mean to them; sleeping with a full tummy and being sheltered and loved!
Our vet bills were very high this month, the 5 siblings were due for vaccines and on top of that we had to have Smokey checked upon twice. For some shots and medication you pay a couple of hundred dollars... it adds up but we feel its worth it. We might be crazy for caring for somebody else's problems but how could you neglect such eyes? Like you... Seeing 30 poor critters like that would kill my heart.
Hugs to you and I wish I had the means of supporting you...
Mariette
October 15, 2012 at 6:35 PM

Sandra said…
He is one handsome boy! I would name him Vyc, in remembrance to Ivy. Thank you again and again for all that you do for the cats.
October 15, 2012 at 8:28 PM

Sweetest Joan,
I'm so happy to see this adorable little boy "in person", and to hear he's doing fine apart from a couple of minor "baby problems" that most homeless kittens have!
I'm sure that little angel Ivy is smiling from the Bridge, seeing her little brother found you!
Joan, my heart breaks over hearing about all those poor homeless kitties... it is so hard and utterly heartbreaking, you KNOW how I feel for all these little souls, and how my heart breaks and bleeds each time I'm in Greece, wishing I could help them all. You are such an angel, God bless your heart and I thank God for having put you there for these little souls.
THANK YOU from deep in my heart, Joan... Knowing the situation myself from many many years of travels to Greece, I appreciate from deep in my heart. Just know that you are in my thoughts and prayers every day, and I so wish I could help you with more than words...

Alley Cats and Angels of North Carolina said…
Oh thank you so much for taking him in. You have such a big heart.
October 15, 2012 at 9:24 PM

Cat and DOG Chat With Caren said…
As always, YOU are an Angel!!

purpleleath said…
Dear Joan, I can't begin to imagine how it must have felt to be surrounded by all those kitties and not to be able to take them... I'm so sorry there is no one else there worried about these kitties. The little boy you found is adorable. His eyes remind me of an artist that has passed away... his name was Eric. I don't have much to help, but I'd like to contribute. Please, send me an email at purpleleath@gmail.com to tell me how. Thank you!!!
October 16, 2012 at 9:40 AM

He's a beautiful little boy. Since it was Ivy that told you to look for a little fur baby why not name him Ivan?

He's lucky he found you!

Johanna Gehrlein said…
Dear Joan,
you really deserved a new cat which just purrs and don't need too much care. Just to please your heart. He will grow to a wonderful tomcat, I know. I had a red ginger tiger and he was so special nice. I can see in his eyes the jokes, he will develope as soon as he feel safe. I wish you both the very best.
Hugs, Johanna
October 16, 2012 at 6:55 PM

Catherine said…
What a sweetie!! And such a lucky boy to have fallen into your loving arms to be sure. I am wondering if you have found a name for this little cutie yet. I would call him Rupert. After the red haired, mischievous, sparkle in the eye "Ron Weissly" actor from Harry Potter, Rupert Grint. :)

Modern Country Lady said…
What an absolutely beautiful little cat.So glad you saved him.I can't really help you with a name, just get to know him and I am sure something will come up!!

Cornelia said…
What a beautiful male cat. He is adorable and the pictures of him are so lovely. You are such an angel to take care of so many souls as possible. As soon as i will sell one of my products, i will make a donation. I hope it will not take long.
The name which came to my mind is Irvy.
October 21, 2012 at 7:13 PM

Cornelia said…
Dear Mr. Cat,´
You are very hansome and adorable. And what name do you wish to respond to? As you are sent from heaven directly to your family on earth, you exibit such natural feline traits and behaviour that your angel-mom is much enchanted to have you close by. As you well know, your angel-mom longs for sweet Ivy who is now in Lilly and Noona's Heaven. I kindly ask you Mr. Cat, if you will, to consider bearing the name Irvy so that you and Ivy to for ever live in heaven on earth? You will lively enchant your angel-mom today and many future morrows!
Thank you dear little soul<3

Seville at Nerissa's Life said…
Looks like he loves the camera as much as it loves him. Gorgeous! purrs
October 21, 2012 at 7:50 PM