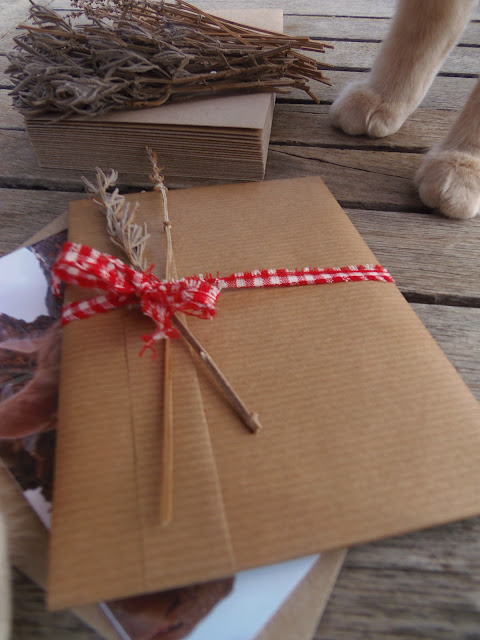 Like last year I've created a series of cards with images of all my lovely kitty rescues... a very sweet and meaningful alternative to a Christmas card - and the rescues help themselves raise funds for food, neutering and medical care! Only this year the cards have been professionally printed and come with a 100% recycled envelopes. That cost a little extra (now tell me, why should recycle be more expensive than white or colored envelopes??? - isn't it a bit upside down?) but the natural feel goes just lovely with these images - almost all captured in nature.

I wanted to add a little Christmas feel to the packaging so I went into their lavender garden for inspiration... The lavender garden has come to represent their space so what better to add than a few dried twigs of lavender!? They have all run through those bushes and released whiffs of lavender in the air... Anyhow, as I sat at the garden table cutting those little twigs Biscuit was as usual willing to lend a creative paw - or his stamp of approval! 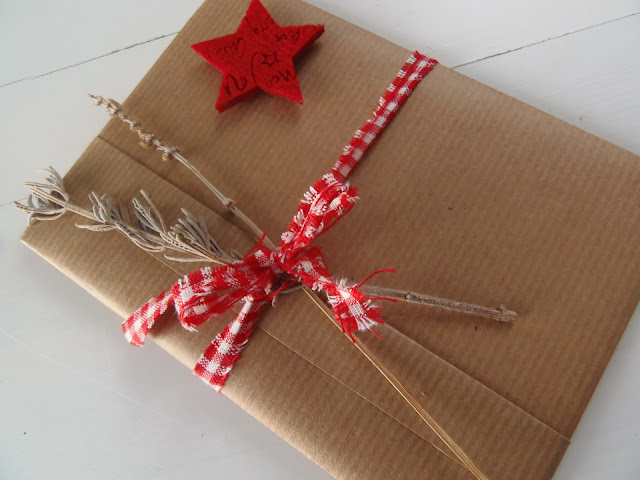 So here's how it looks on the outside... a bit of brown paper packaging, a few lavender twigs tied up with a bit of red and white ribbon  - and a little felted Christmas star. And ta da... 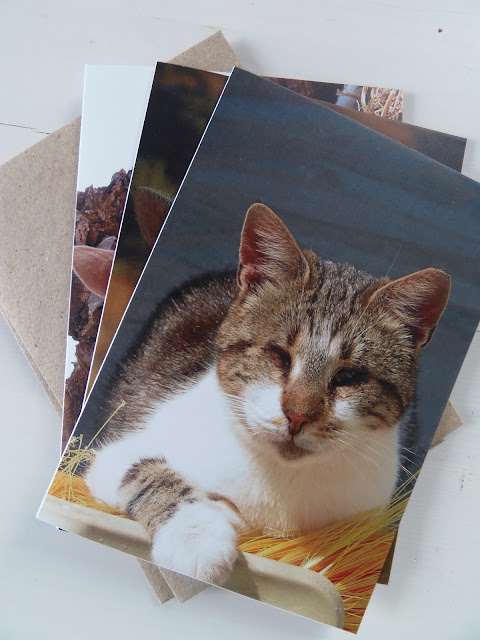 - here's how the cards look (with the brown recycled envelopes at the back). The cards are printed on thick 350gsm FSC credited paper stock and have a light satin coating on the outside. Dimensions 4.13" x 5.82" or 10,5 cm x 14,8 cm. It's blank inside but the back has a meaningful message (a quote from the Talmud): 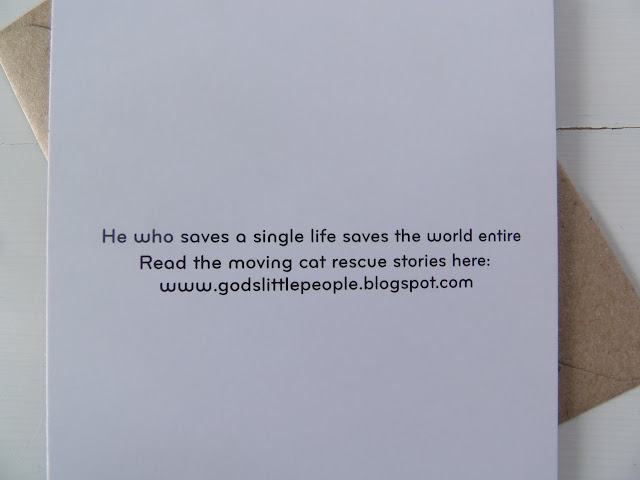 Here's the 7 images you can chose between: 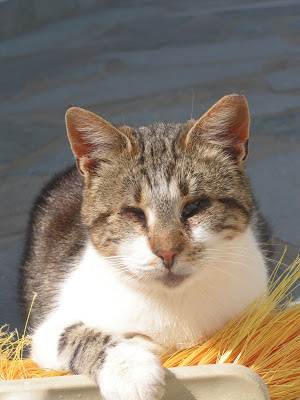 1. My hero girl GRACIE - you haven't even heard her story yet. Gracie is 100% blind and I'm delighted she found her way to our garden. I'll share her story in my next post and I think I will call it "Gracie's tactile world." Gracie relates to the world around her through what she can touch and feel. 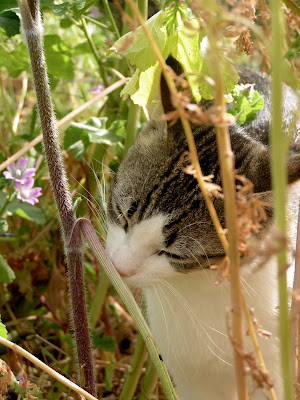 2. Sensitive and sweet MAXI who has not been mentioned that often. Maybe you remember him from last year (around this time). He was found by the side of the road with his much smaller sister (actually they didn't at all appear as if they could be from the same litter - there was that much of a difference between them). They stood a bit bewildered as if someone had just dumped them and he was very protective of her. It was so moving. He was only a 8 week old kitten himself but it was as if he couldn't quite give in to being a kitten because he was looking after her. 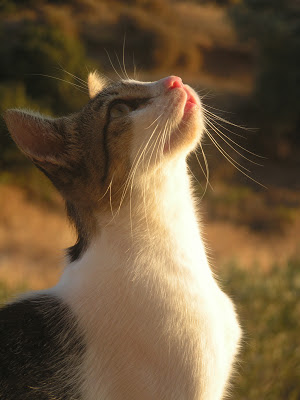 3. Which brings me to his little sister TODDY (I used to call her Mini - Mini & Maxi) but for some funny reason she's ended up with the name Toddy. She's as placid as cats come but at the same time God spilled a rather large dose of impishness into her!! And of course she is little Miss Aegean Cat 2012 - this image won everyones heart at the Aegean Cat photographic exhibition this summer. 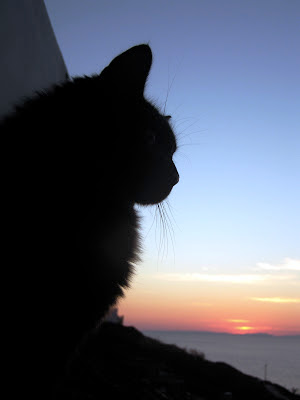 4. Spectacular RUFUS - Rosie's majorly charismatic brother. Rosie lives because of Rufus. Had it not been because of him standing in a very pleading way in front of the town park where I first spotted him - I simply wouldn't have found Rosie. Rufus moves with confidence and certainty - assured that he is the most handsome boy ever and no one would ever have believed this charmer was a timid and scrawny dumpster cat. 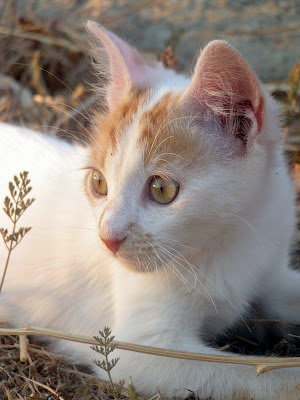 5. Remarkable little SNOWY (well actually he's grown a lot!). We've been close to losing him many times. Due to the bad health he suffered at a way too early age he suffers asthma and now lives a 95% indoor life. It's been a long process finding a balance with Snowy and we've had testing times with him on and off antibiotics (and Prednisolon) we now know that after just four days without antibiotics he gets very unwell. I can't even count the number of times he's been to the vet and yet he is such a great and trusting little sport! 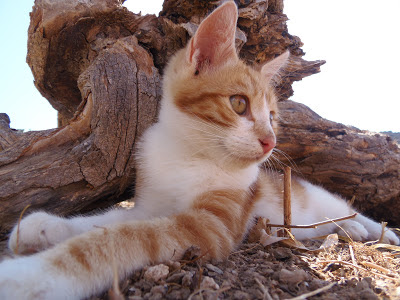 6. And of course little SKIPPER! It was impossible for me to pass her by as she (yes, there's been a slight gender change around here lately, lol!) wondered around the dumpsters looking a bit confused questioning what she was meant to be doing with herself (freshly dumped by someone who'd cared lovingly for her up until that point) and whether her previous owner would actually come and collect her again. No way could I ignore this beautiful and loving little white and ginger beauty. 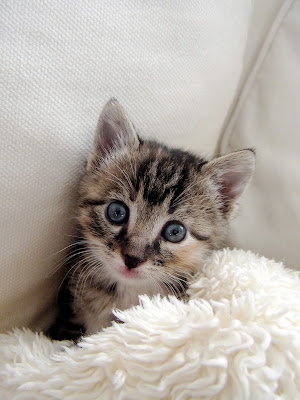 7. Last but not least the utterly butterly BELLISSIMA whose image I also used last year but I so love this image and think she is the most beautiful kitten I have ever seen among my rescues. You probably read the recent post with a reminder of her resuce. This little face encapsulates the essence of innocence.

How to purchase the cards:
Each card is $5 and you can order the cards by sending me an email with the name of the card/cards you want and remember to write how many you want. Email order to saints@mail.dk (same mail account as my Paypal).

How to pay:
Please pay by using the donate button on the right side bar of this blog - it takes you straight to my Paypal account. Please let me know if you have problems. REMEMBER to include your postal address! The cards will ship immediately and will reach you within 7-14 days.

Postage is included for 1 card but if you order two or more please add $1 for postage. Currently there's a total of 25 cards (more is coming within 10 days) which leaves a very limited number of each card (so don't hesitate to order if you have a favorite). I will update the number every day and as they sell. If you have a favorite and it is sold out I will put you on the list for the next batch. 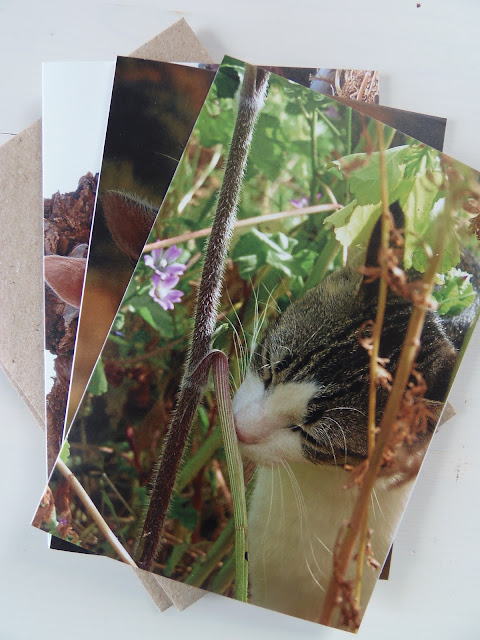 On behalf of the cats I thank you in advance for your support. I can't wait to ship these beautiful cards around the world!

Anna E said…
How beautiful and essenced - each picture tells its own unique story, and you have got the eyes, connections, love and sensitivity to capture those rich and intimate moments...
I´ll make an order on your email address in a moment. Thank you for sharing these priceless pictures and cards, xo
November 23, 2012 at 12:54 AM

Johanna Gehrlein said…
Dear Joan,
oh, those pictures are so supercute. I hope, you will sell them good.
Hugs and greetings, Johanna
November 23, 2012 at 2:00 PM

Annuk said…
Sweetest Joan... ALL these furry babies are so precious!!!! EACH one of these stories touches the heart and reminds us all about the precious beauty of each single little soul. What a wonderful, meaningful way to share them with the world! The quote you chose is so wonderful... it drove tears to my eyes.
I'm sure you will sell these cards in no time... but I'd really love to have one for myself symbolically, I'm going to email you in a minute!
Big hugs!!!!!!!
November 23, 2012 at 2:12 PM

Marg said…
Wow, those cards are so gorgeous. We will be back to hopefully order a couple of them. We don't have the money right now. You did a gorgeous job on them. We love Gracie and can't wait to hear more about her.
Have a great day.
November 23, 2012 at 7:05 PM

Mariette VandenMunckhof-Vedder said…
Dearest Joan,
What a lovely cards again and the way you present them is so special.
There are no words for the love of those special cats. Before I comment here, I did order some... who could NOT?
Hugs to you,
Mariette
November 24, 2012 at 6:35 AM

Sandra said…
These are beyond awesome! I already ordered them and I will definitely include their stories with the card when I send them... although... it will be so hard to give them away!
November 24, 2012 at 9:55 AM

DIMI said…
Hallo !I'm Dimi,Annuk's friend!Lovely idea these cards for the wild cats!I have one Thanassis!I want to order some!Send me a email!Your cards are so preety!
http://decdimisaussi.blogspot.gr/
Thank you for sharing these priceless pictures and cards!
Dimi.
November 24, 2012 at 11:57 AM

JuanitaTortilla said…
These are all precious babies. And I also like the natural colour of the recycled envelopes! :)

Catherine said…
These are so terrific Joan! A beautiful way to help more kitties. Love it!
Hugs!
xo Catherine
November 25, 2012 at 8:36 PM

Tammy said…
The kitty cards are so sweet! Gracie is just a little love. God bless you for caring for these precious babies. Best wishes, Tammy
November 29, 2012 at 3:53 PM

Sara said…
I absolutely ADORE kittys! the photos are so beautiful!

Seville at Nerissa's Life said…
Hey there! Why not stop by my blog today and pick up your new award? purrs
December 2, 2012 at 4:57 PM

One of the worst things about looking after a cat, is the putrid smell of urine they can leave all over the house.

The problem is some cats completely ignore their litter boxes. They don’t even know it exists (despite your best efforts of showing them).

But it’s not just the smell that’s frustrating.

What about the time, effort and cost of having to clean it all up as well?

It can be a nightmare…

So what can you do?

Well, instead of getting rid of your cat…

I recommend you give “Cat Spraying No More” a try.

It’s a step-by-step system that’s proven to get your cat to pee in its litter box permanently.

And it includes a 60-day money back guarantee, so there’s ZERO risk.

If you’re ready to remove the problem for good, you can find out more here…

Go check it out now…