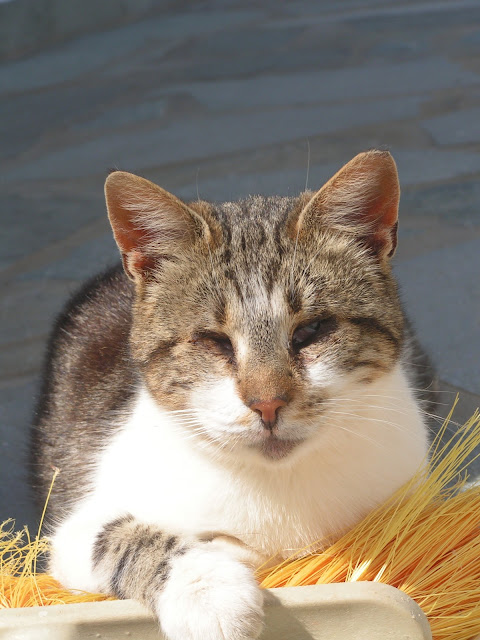 So I promised to write about this beautiful heroic girl Gracie. She is 100% blind.
Gracie's "rescue" story has been painstakingly slow and has required bundles of patience.. but that I have.

I first spotted her almost two years ago, January 1st 2011. I was driving along the road of our quiet valley when I saw this little (I think she must have been about 5-6 months old) awfully skinny and strangely wobbly walking cat. I instantly stopped to check her out but met a very scared cat that set off in a direction away from me - but with a very strange kind of wobble. I tried to walk towards her but with the result that she started running and fell into ditches and bumped into bushes... I realized she was blind. I can't actually describe the sense of distress I felt - how on earth was she going to survive like this?? Not to stress her further and cause her harm, I knew I had to give up pursuing her. But I searched for her for days after that - but with no result. We live in a vast nature area on a mountain side and it was impossible to know where she was hiding. I eventually gave up... I frankly thought she hadn't made it through the winter. But... 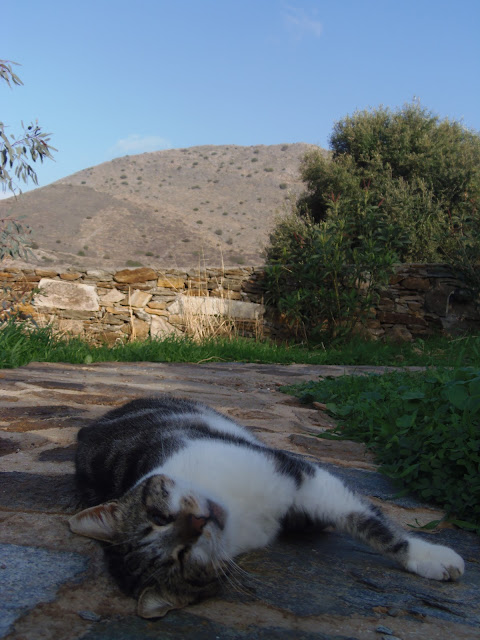 Spring time came and I suddenly spotted her again one day - just outside our gate. I think she had secretly smelt her way to a source of food (I feed our more feral cats not far from the gate). Stupidly in my eager to feed her I walked towards her with a handful of kibble. With the same result as the first time I saw her... she hurriedly wobbled away. This time I knew not to pursue her further. Slowly slowly this started repeating itself - only now I began to outsmart her. I knew which direction she would set off so I took off my shoes (so as not to make a sound to scare her) and ran ahead of her and left some kibble. Success!!! I could then sit at a distance and watch her have a much needed meal.

This happened more regularly and I started calling her name... it had to be Gracie, she moves beautifully and carefully when she is not stressed. Feeding her involved taking off my shoes for a long time - this allowed me to put the food just in front of her without her noticing me. But eventually she got used to my name and I think she associated it with food and no danger. We built a great little trust relationship and I was of course over the moon the first time she allowed me to pet her. Talk about a WOO HOO feeling!!! 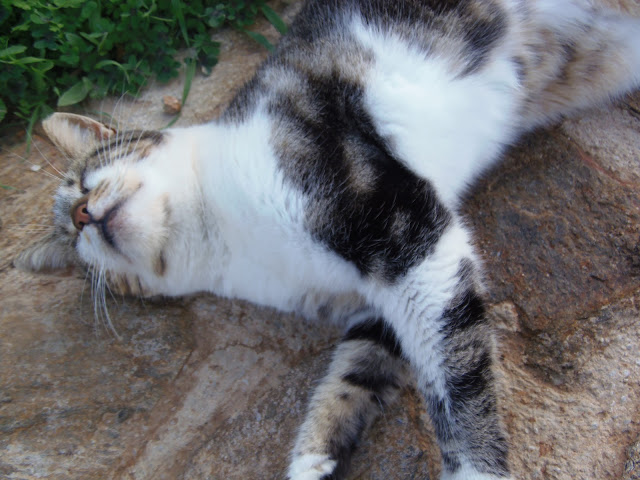 She started settling and about a year ago it was obvious she had not intention of leaving. She did not do well with any sense of confinement so when we found her in our basement last winter taking shelter from the rain, we naturally left a blanket for her. She began to thrive and put on weight. Our first real challenge came when she had to be spayed. We knew she would freak out in the transport box. She was of course petrified but I told her she was safe and would soon be back in her well-known territory. We'd agreed with the vet that she would be put under immediately to alleviate her stress and after bringing her home she was released into the caravan in the garden. It was freezing cold outside and I simply had to make sure she would be warm during her recovery. I'd created a big woolen nest on the floor and after an initial moment of freaking out she gradually began to settle (the tasty food helped!). The next morning I actually found her curler up in the woolen nest beautifully asleep. She was content and very happy when she stepped outside and realized she was indeed in her well-known territory again. Since then she has grown very trusting of us and she now sleeps indoor with the younger cats. They are in a place where there is always an open door so Gracie thrives here.

Gracie is very tactile... she loves lying in places where she can touch something - like this top image where she is resting her paws on a broom head. Inside she has her food on a box slightly raised above the floor. It has an uneven surface and it gives her great comfort relating to the world around her through touch.

Her true nature has appeared and she is actually a very cheeky girl. When it's time for feeding she runs ahead of me (on the path you can see in the above images) and hides behind the bushes to the side. When she can hear me just in front of her she jumps out to surprise me... need I say she melts my heart!? She always always rolls over the moment she hears me and is ready for a tummy rub and you can see in these images that she loves posing for the photographer - I actually think she is smiling to the photographer in this last image!!

Sandra said…
Gracie is one amazing cat! Just how did she manage to survive on her own is a mystery to me. I am so glad she sniffed her way to you and that the two of you could be reunited :)
December 22, 2012 at 4:58 PM

Crafting Queen said…
Thanks for sharing Gracie's story with us. Sounds like an amazing cat. So glad she found her way to you. Hope you and all your beautifully furryone, especially Skipper has a wonderful Christmas. Lots of hugs Anesha and Skipere #1
December 22, 2012 at 5:06 PM

Mariette VandenMunckhof-Vedder said…
Dearest Joan,
What a lovely story about Gracie! How she persevered, despite her handicap. They show so loyally their love to us; that is better than any wrapped gift on earth!
Hugs to you and a Merry Christmas.
Mariette
December 22, 2012 at 7:59 PM

wildcatwoods said…
Cats are so very adaptable as we can see with Gracie. Thank you for caring for her. Our state has a Blind Cat rescue group and they have worked hard to make people know that they make great pets.

ANGEL ABBYGRACE said…
I am so glad Gracie realized that your home was a safe haven. Thank you for showing her such patience and care, she is a beauty no doubt about it!
December 22, 2012 at 9:25 PM

Annuk said…
Dearest Joan,
this is such a wonderful story, and Gracie is indeed an amazing girl!!!! And she is a beauty!!! I can really see how happy she is, how contented and trusting... she has found her safe haven with you, and a little paradise where she can be safe, loved and happy! It's so amazing and heartwarming what love can do!!!!
Thank you so much for introducing this wonderful girl to us!!!
My warmest hugs to you and a big kiss to Gracie! Oh well... and to each one of your wonderful babies!
Lots of love,
Anna & Zoe :)
December 22, 2012 at 9:56 PM

Cornelia said…
Oh God, this story is the cup filled to overflow with warmth and settle knowing. You are doing wonders for her soul. Brave world of compassion, love and care, such contact between you, Joan, and your amazing Gracie blesses everyone getting to know about it. Thank you for sharing it with me/us. Such blessings are from a world where everything is how it is meant to be and everything good becomes possible.
December 22, 2012 at 10:57 PM

Modern Country Lady said…
Miracles never stop when cats are near you, Joan.You truly are an amazing person.So fulll of caring and compassion.May the coming year be full of goofness and happiness for you, your loved ones and your beloved cats, and especially Gracie.Have a happy Christmas. XXXXXX
Bea
December 23, 2012 at 1:37 AM

Heather said…
May you be blessed with all the love, happiness, trust, kindness and compassion you have given to Gracie and all the other kitties you have devoted your life to... thanks for sharing, Gracie is indeed beautiful!
December 23, 2012 at 6:25 AM

Johanna Gehrlein said…
Dear Joan,
what a sweet story. I love that Gracie found her way to your house and heart. No wonder that she enjoyes your love and care. You are the Angel for those cats. God bless you for all you do for those cats. Have a very merry Christmas time with your big family.
Hugs, Johanna
December 23, 2012 at 10:04 AM

MarkD60 said…
To me, nothing beats the feeling when a cat lets you pet her/him for the first time.
This morning I was walking the dogs, and LT was weaving around my feet. I decided I wouldn't pick him up till he stepped on my shoe. Finally he did and I did.
BTK is still our most aloof.
December 23, 2012 at 2:04 PM

Anna E said…
Gracie is so beautiful, and there is a very special essence coming out of her eyes, even though she is blind. It sounds so indearing when you tell the story of her jumping out in front of you from behind the bush :-) She truly lives a graced life and is a grace to you and the rest of your (cat) family. What a wonderful love affair :-)) xox
December 24, 2012 at 12:19 AM

~Kim at Golden Pines~ said…
A beautiful story that only you could make possible!

Alley Cats and Angels of North Carolina said…
What a beautiful story. Gracie is a lucky lady to have you as her angel. Thank you for doing all you do.
December 26, 2012 at 5:25 PM

Mariette VandenMunckhof-Vedder said…
Dearest Joan,
Since you at times can't handle your email well, I'd better put it here. Did you know that with a few simple changes on your layout you can than reply on your own blog to people's comments and they will get a notification. That works really great. Look at my tutorial here: http://mariettesbacktobasics.blogspot.com/2012/09/how-to-comments-reply-settings.html
Hugs to you dear friend,
Mariette
January 31, 2013 at 3:12 AM