She had it coming 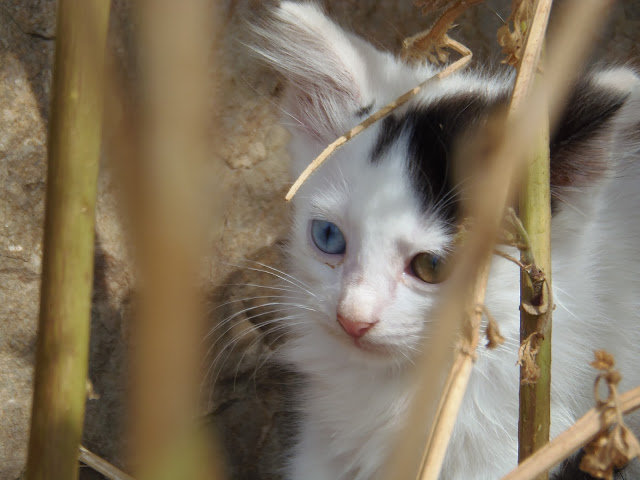 We have joked and laughed about it, been anxiously anticipating it and had serious talks about it - but of course she had it coming. Rebecca (my terrific kitty assistant) had to at some point come across her own little kittens that she would want to rescue.

I've known for a long time now that I needed to do the responsible thing, which is to not take on further rescues. The 35 kitties that I have rescued now need a certain quality of life, and it is difficult already as it is to cover their basic maintenance (if I include basic things such as monthly flea and worm treatment). We get through approx. 100 kg of kibble/wet food each month (including the group of dumpster cats that we feed too), so yes... the "kitty rescue honey moon" sadly is not unending for us. But that said, I do want Rebecca to have her very own rescue experience. That very special feeling of rescuing a cat or a kitten and that very special bond that it creates.

She's bee eyeing up various "potentials" and right now this little fluff ball has got her tucking her heart strings. A little brown and blue eyed beauty that just happens to be born into a small colony of cats,living on a hillside behind the old Venetian part of town. 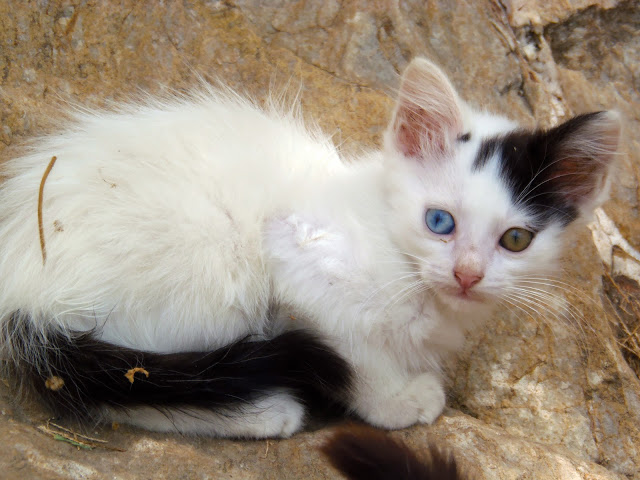 Rebecca felt this one was a match because of the unusual blue eye (Rebecca has eyes bluer than blue!) and it's a little rock climber - so's Rebecca! 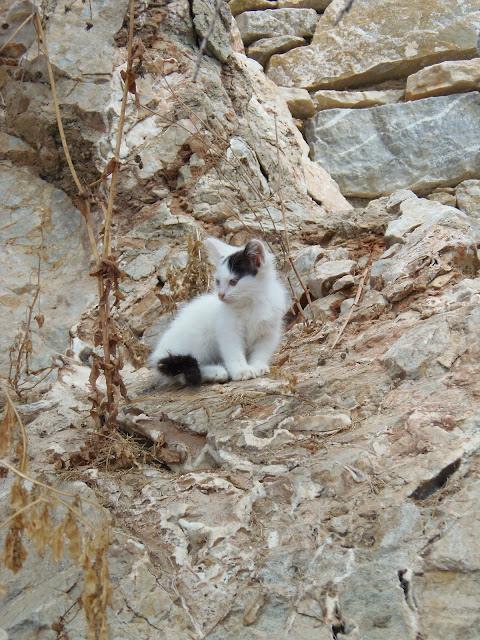 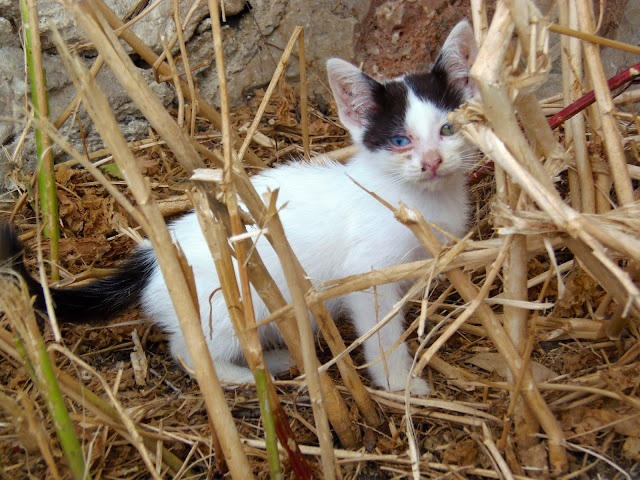 Little rock climbers sibling... yes, in need of some treatment for his or her blue eye. And yes, of course this one would need rescuing too. Anyone out there ready to adopt??? 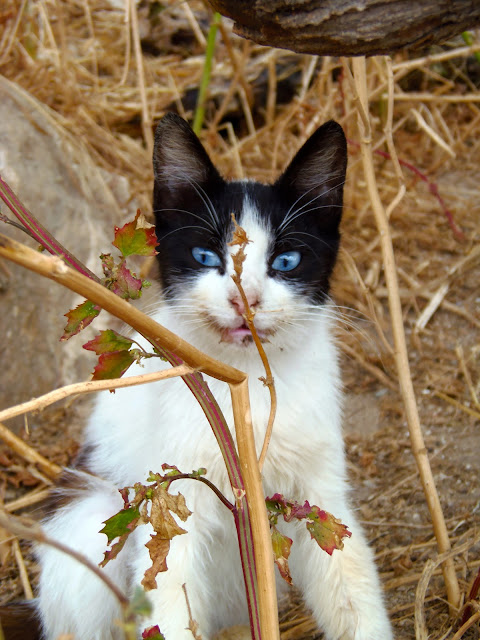 Blue eyed mamma kitty... isn't this rather unusual in a non pedigree cat?? 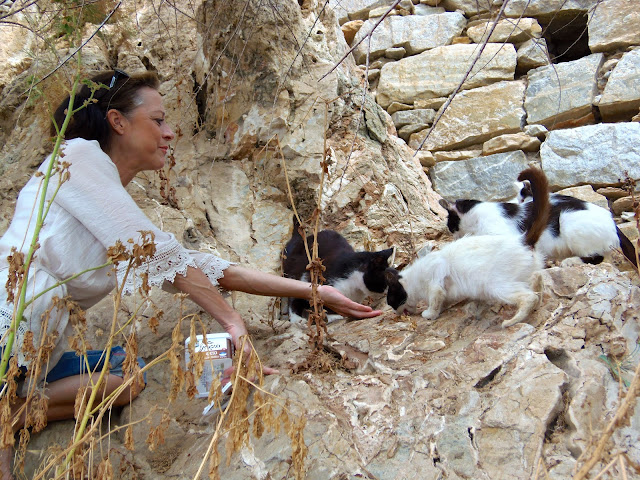 And "big" rock climber (Rebecca) trying to make friends with the little ones (a difficult task with all the hungry adults around). 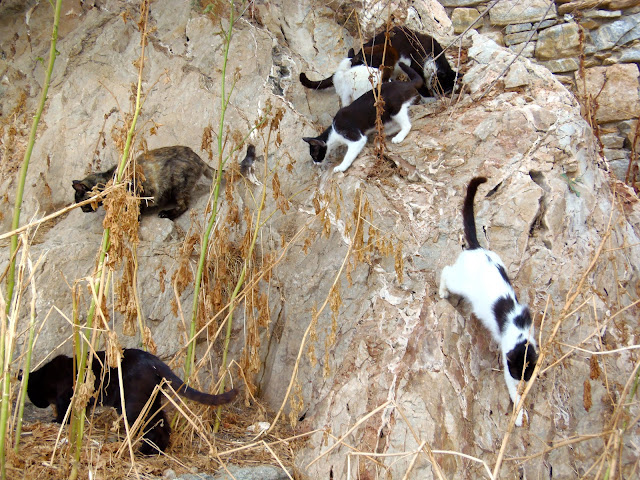 The adult cats are fast when there's good kibble around. 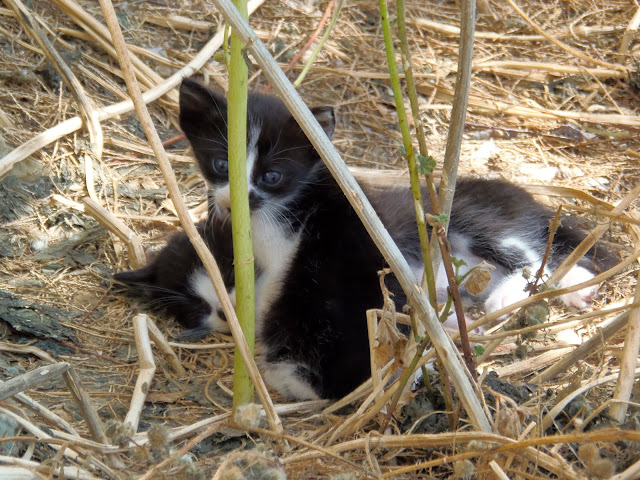 Proof that the task is unending. Whilst Rebecca spent time trying to get close to the blue eyed kittens I discovered these barely standing kittens in some shaded area... they belong to the tortoise colored cat in the above image (to the left). 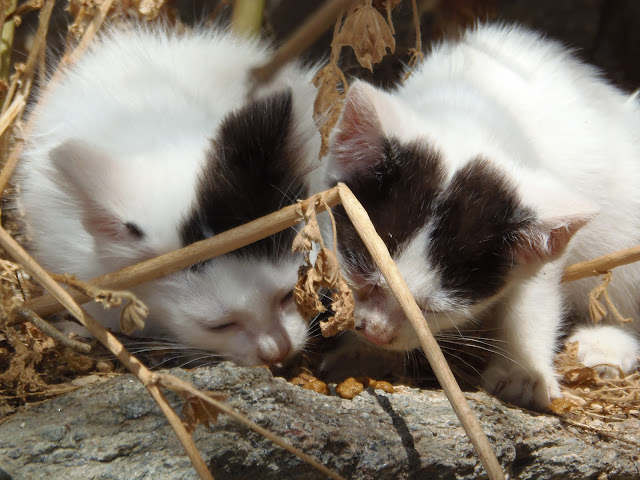 The adorable blue eyed kittens having at last gotten hold of some of the good kitten kibble (meant for them of course!). 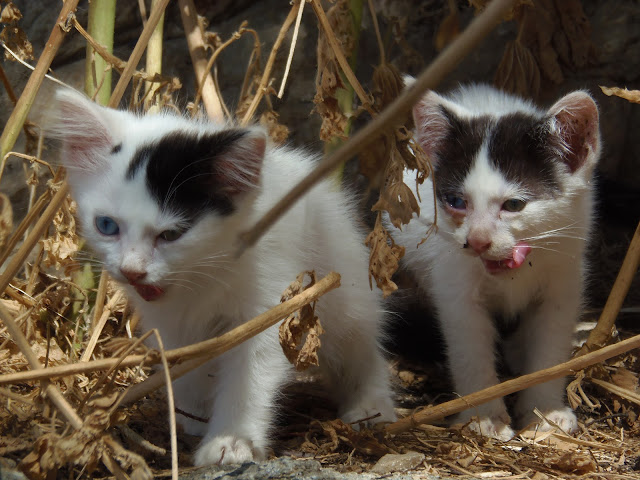 And it appears that it went down very well... licking their mouthes in stereo. 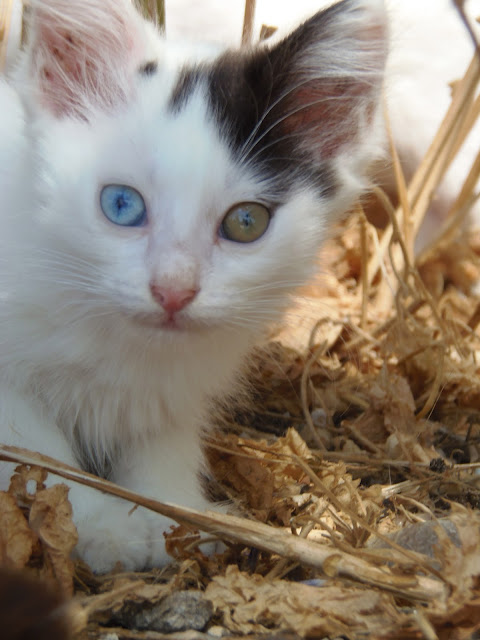 We will keep you posted about these little guys... So difficult because of the obvious attraction to the pretty one, but who wouldn't also want to rescue the other more poorly looking one?! And yes, what about those little black and white kitties?? Fortunately we have been informed that all of these cats are fed by an elderly gent twice every day, so they are not suffering. But that doesn't mean that you would want for them all to sleep on a soft bed!!

Crafting Queen said…
Oh the little black and white one reminds me of my Eva (who we lost a 6 years ago). She had one blue eye and one amber eye when we got her. Want to scoop them all up and give them a good home. Must be so hard for you and Rebecca. Look forward to hearing more. Lots of hugs to Skipper and the other kitties. :)
May 12, 2013 at 3:55 PM

Sandra said…
No matter if beautiful or not they all deserve to be rescued. Have you ever thought of founding a sanctuary, maybe get some more funds? And how about looking for people willing to adopt them? I know of a Lebanese animal organization and they often place their animals to some country in Eu. I hope they thrive. But they should be spayed or neutered, too.
May 12, 2013 at 4:54 PM

Heather said…
I know these cats are born "in the wild", but there would be so many less if the owner's of cats (and many dogs too) did the right thing and had their pets spayed/neutered... this is the tragedy of it all... if it were me, I would adopt them all, but if I only had to choose one it would be the underdog with the sore eye! Cheers~
May 12, 2013 at 5:44 PM

Anna E said…
They are simply too cute, adorable and precious all of them... the blue-eyed ones look like they belong in some royal saloons, where they would be the pets of a princess...it´s hard to imagine how different destinies kittens meet. However, it´s so great to hear that someone is feeding them every day and Sandras idea of people in europe adopting them, would be marvellous. But I know that likely noone on your island would want to :-(
I cuddled the cutest baby-rabbits today, when I went with my family to the kindergarten, where my husbond works; 6 little darlings, one albino, one nougat-coloured, and the rest of them white with grey or brown spots and stribes. My daughter of course missed having a rabbit, and now she tryes to talk us into borrowing one of them for a day, keeping it in the garden, and delivering it back at the end of the day. And that´ll have to do, due to allergy and the fox, who took the outdoor rabbits... anyway, better than nothing, right?
May 12, 2013 at 6:42 PM

The Cat Guy said…
I'm so glad you care and do all you can to look out for these kitties. It sure seems there are more cats around your area than any other I know, I think you've written about the cultural difference of how cats are viewed there. As I was reading, I kept thinking of the scale of the TNR project before you, it almost seems never ending!

Johanna Gehrlein said…
Dear Joan,
what a super cute little cat with different eyes. I believe you how hard it is, to find so many cats in need for help. I hope Rebecca will adopt this sweet little guy. In the end, you cant help every cat, thats right.
Hugs and greetings, Johanna
May 12, 2013 at 8:31 PM

Annuk said…
Oh my Goodness, Dear Joan, they are ALL so adorable, and yes... I SO well know the feeling... wanting to rescue them all... They would ALL deserve loving homes, including the adult kitties. They all deserve to be rescued, and that's what breaks my heart each and every time I am in Rhodes. You just can't rescue them all. I look at each poor kitty I see around the dumpsters, and I KNOW he/she would be such a precious soul deserving a quality life.
Good to know there are good people helping with food!
"That very special feeling of rescuing a cat or a kitten and that very special bond that it creates"... I loved this sentence and it's SO true!!!!
Praying for all these babies!
Big hugs to you, dear Joan! :)
May 12, 2013 at 10:10 PM

Anonymous said…
I would give anything to be able to help with money. But alas I have a struggle myself with 40 plus cats to feed and maintain. All of it is with my own money since I never applied for a non-profit but think that at my age I need to do something to try to make sure none of my cats are destroyed if I depart this green earth. My vet orders most of meds for me, fluids, and supplies but there is no discount for food coming my way.

I hope and pray there is a good answer for you, Rebecca, and I. PS: I also need a helper who has worked with me for years. He works for a bit above minimum wage. The work is not hard just that it has to get done. I do all the work 2-3 days per week. I am retired. I stopped trapping 4-5 years ago but still have a cat here and there show up on my property. None for the past 3 years. Thank God for that. :-)
May 12, 2013 at 11:01 PM

~Kim at Golden Pines~ said…
They all pull at my heartstrings!! And I continue to be grateful that there are those like you and Rebecca and the elderly gentleman who are there and making a difference in your corner of the world!
May 12, 2013 at 11:37 PM

Cat and DOG Chat With Caren said…
Cats with eyes like that are considered to be quite lucky! Actually I reviewed a book about that on Cat Chat...the book is called "Enchanting Lily" and here is the link to the review: http://opcatchat.blogspot.com/2012/10/book-review-enchanting-lily-by-anjali.html
May 13, 2013 at 3:47 AM

Mariette VandenMunckhof-Vedder said…
Dearest Joan,
What a lovely series of photos with begging eyes, for food, love and affection...
Oh, we know the pain and it never ends with only food.
Hope Rebecca finds her own rewarding love with her rescued kittens.
Hugs to you both,
Mariette
May 13, 2013 at 5:57 AM

Catherine said…
Oh my stars! Don't you just want to scoop all those cuties up and take them home with you. They are all so precious! I wish them all the best and am glad someone is taking care of them. Two different colored eyes - love it!
xo Catherine
May 13, 2013 at 6:49 AM

Alley Cats and Angels of North Carolina said…
Oh those babies outside make me sad. I love them all. I'm glad someone is taking care of them. Hopefully TNR will be in the cards for these kitties so there will be no more babies born. I can donate a little to help with TNR costs. Although I have no idea how much that costs where you are and if my donation would even be a drop in the bucket.

the kitties are so cute and adorable. If my father-in-law (who lives with us) hadn´t an unfortunally allergy against cats I would adopt two of them quickly. In the past I had cats and loved them, now we have two small Yorkies and I´m sure they would love kitty companions too.

Blue eyes or odd eyes are rare in household cats. You can be sure that a blue eyed persian or a siamese is behind the kitty ancestors. Blue eyes are a rezessive gene and some generations later they can be shown if two of this blue eye genes come together. Blue eyes in coloured cats are more rare than in allwhite cats. I love blue eyes. I have seen a black cat with no markings and it has blue eyes! That is really special. Some breeders of pedigreed cats are working on coloured cats with blue and odd eyes.
The deep blue eye colour of the little b´lackwhite kitty is amazing! Sad that we have the allergy in our family. I would take this kitten in a minute. I wish them that all of them find nice homes with lots of TLC because they deserve it as every pet in the world.

Still planning to send you some $ for spay/neuter for this colony but had some unexpected car repairs.
June 5, 2013 at 3:49 AM