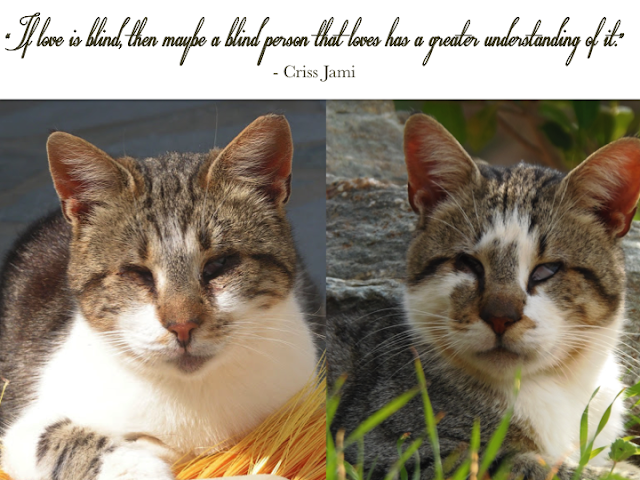 You might remember the story of our blind cat Gracie?
Well, this is the story of Gilby - another blind cat which we believe is the long lost brother of Gracie. They move completely alike and they have a similar scanning head movement...
I guess their way of sensing what's happening around them. 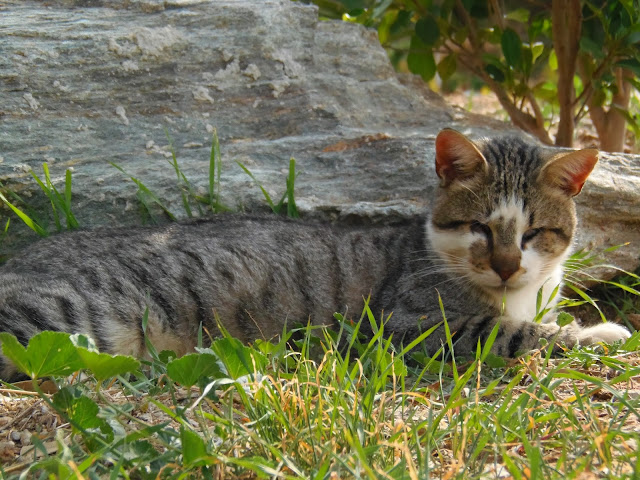 If Gilby is indeed Gracie's brother then Gilby has survived on his own in the wild for three years!! Quite how is a complete mystery.

I first spotted Gracie almost three years ago and Gilby used to scurry off in the same direction as Gracie and up the exact same dirt track further up the mountain side. He even started coming inside the garden from the same side as Gracie did. That's 6 months ago. Back then he looked terribly skinny, dehydrated and unkempt. At that point he was just too timid to get close to and we literally had to throw food at him in the hope that he would find it before running off again. It was clear he came in the search of food but would always get too overwhelmed by fear when he heard us. 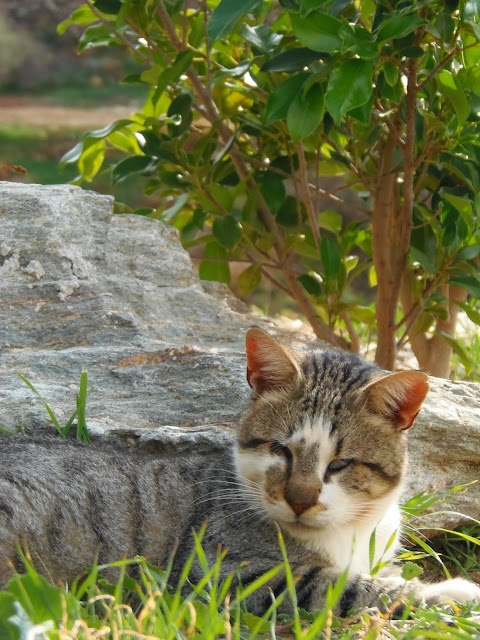 But like Gracie he seemed to remember us and our place. And recently he started coming back. Maybe he was so "lucky" to have a summer of tourists feeding him because he seems to have become just a bit more used to human contact. But as it happens on Greek islands, tourists disappear this time of the year and Gilby obviously came to us in the search of his means of survival. Rebecca has now taken him under her care and I'm delighted to see how he is thriving and becoming more confident and now even responds to his name Gilby. We thought he should have a G name as we felt certain he was the brother of Gracie. So now it's officially Gilby & Gracie! Sounds sweet doesn't it!? 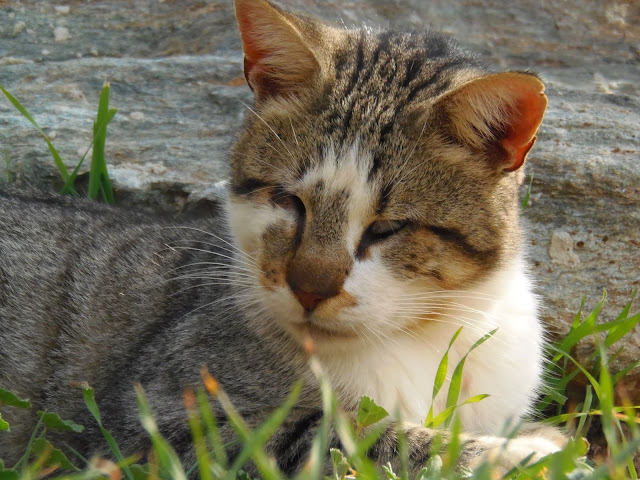 Gilby is showing great bravery. He now knows where the outdoor feeding station is in spite of all the other cats. And he's discovered where there's padded sleeping spaces. But he has also discovered that it is perfectly safe to just veg out right in front of us licking up the mild and warming rays of sunshine you get in Greece this time of the year. 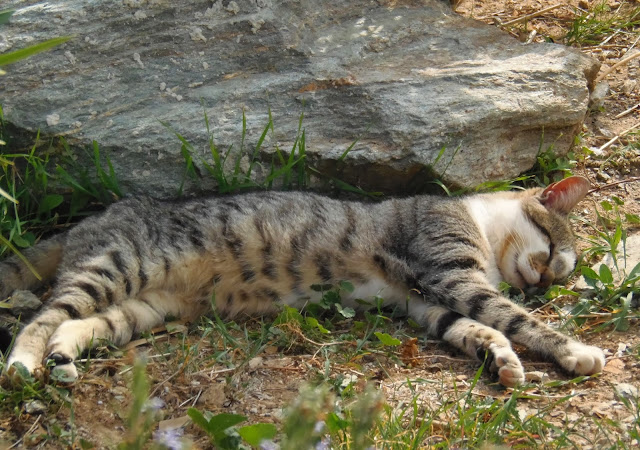 It's a very great privilege to earn the trust of a feral but there's something even more special when it's also blind. Gracie has given us her heart full-heartedly - her capacity to show us love - and receive it n return - is quite honestly overwhelming and most humbling. Gilby is firmly on the same path. A lot of kind and encouraging words are flowing his way each day - and now he is even getting used to feeling love through gentle touch. Very soon Gilby's true nature will be able to flourish. I am sure we will see a boy full of mischief - just like Gracie. But for now we just let Gilby find his own way.

I don't know if Gracie and Gilby have a greater understanding of love because of their blindness but if Gracie's bounciness is something to go by then Gilby has arrived at just the right place. We have love in abundance and I believe this gentle boy is quite ready to have his heart filled with just that!! We feel most honored he has come our way.

For those not familiar with Gracie, then Gracie is the girl to the left in the top image.
You can read her story here.

Yes, I definitely remember Gracie's story. And now her brother has wormed his way in -- that's wonderful. I can't imagine the happiness you feel with each new experience you have with Gilby. He's a beautiful cat, for sure!

Kjelle Bus aka Charlie Rascal said…
Me and my mom-person remembers Gracie too.
They are very look alike Gracie and Gilby so I do beleive they are sibblings :)

Marg said…
Wow, that is just amazing that he has been able to survive being blind and all but I have heard stories about blind cats and they can do just about anything that a seeing cat can do. So glad he has found the feeding place.
November 17, 2013 at 11:17 PM

Cat and DOG Chat With Caren said…
you know I think I remember the story of Gracie and you mentioning Gilby running away to where you couldn't get him.
I am so glad Rebecca is looking after him. What a sweet boy!
November 17, 2013 at 11:36 PM

Kitties Blue said…
Mom loved going back and reading about Gracie and meeting Gilby. How beautiful they both are and how lucky to have found you. Mom says that she can feel your love for them and can tell they love you equally. Purrs and hugs, Lily Olivia, Mauricio, Misty May, Giulietta, Fiona, Astrid, Lisbeth and Calista Jo
November 17, 2013 at 11:49 PM

Sandra said…
Oh my goodness, the similarity is so great, that Gilby must be Gracie's brother! And he is as gorgeous as she is! I am glad he found a safe haven with you - I am sure he found his forever home.
November 18, 2013 at 8:40 AM

Cornelia said…
Tendering the soul and warming the heart. Gilby and Gracie´s stories have their sentiments, their destinies which you give space and time to unfold in natural and needful ways. Gracie and Gilby´s stories are impregnated and imbue respect, love and gentleness. The mighty RESPECT FOR ALL LIFE shine thoroughly through with candid rays of love in and from your experiences and stories. It makes me value all life in an intense and special way. They and you bring ´the sight´and make possible to see life in bright light. The combine of sentiments ray through together with the mighty COMPASSION and HUMILITY for all life. A voice from the past echoes through Gilby and Gracie´s stories: "The animal shall not be measured by man. In a world older and more complete than ours, they are more finished and complete, gifted with extension of the senses we have lost or never attained, living by voices we will never hear. They are not brethren; they are not underlings; they are other nations, caught with ourselves in the net of life and time, fellow prisoniers of the splendor and travail of the earth." Henry Besson (1888-1968)
Can a "thank you for all that you do" cover the mighty gifts which purr and pour their way to my soul? I think not.
November 18, 2013 at 10:24 AM

ANGEL ABBYGRACE said…
Oh my yes of course I remember Gracie's story. How wonderful for her brother to reunite with her. That is just so heartwarming and we are glad Gilby is under Rebecca's care!
November 18, 2013 at 4:52 PM

Crafting Queen said…
How amazing he survived on his own for so long. You and Rebecca are doing a wonderful job.
November 18, 2013 at 8:30 PM

Jenn said…
They definitely look like sister and brother! That is very amazing that he was able to survive on his own for that long. How wonderful that they been reunited with each other!
November 19, 2013 at 4:41 AM

Mariette VandenMunckhof-Vedder said…
Dearest Joan,
You know what is so touching to observe by such neglected kittens; how they FINALLY can let go and rest without worries! That is a gift in itself for being able to watch this.
It takes time but they will open up and learn to fully trust those that love and feed them. By smell, by noise, they KNOW!
Hugs to you and Rebecca.
Mariette
November 19, 2013 at 5:18 AM

Alley Cats and Angels of North Carolina said…
What a wonderful and beautiful post.

Annuk said…
Dearest Joan,
I had missed this adorable post, but I had seen handsome Gilby on your Facebook page... He is so beautiful and precious, and I am sure he IS Gracie's long lost brother! They look so alike! They are such wonderful, precious little souls! Thank you for rescuing both of them and for giving them a life filled with love and happiness!
Much love and hugs!
December 23, 2013 at 1:04 AM

Unknown said…
HI All……My Self Nikita Escorts Providing Services of Escorts in Delhi and Escorts in Gurgaon With Full of Safety.